Donkeys at dawn: A rubbish job in Algiers' Kasbah 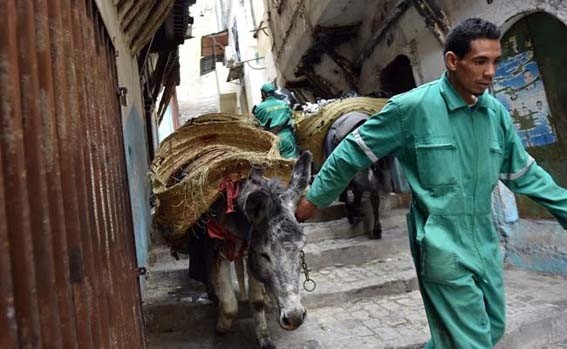 It's a rubbish job, but someone has to do it – or some animal. In the alleyways of Algiers's famed Kasbah, donkeys shift tonnes of trash every day. Some streets in Kasbah are so narrow that single file is necessary. Others are wider but are steep and stepped, ruling out more usual rubbish collection methods. Hence the resort to animal power to keep this World Heritage Site clean.

UNESCO calls the Algerian capital's Kasbah "an outstanding example of a historic Maghreb city," and says it greatly influenced town-planning in the western Mediterranean and sub-Saharan Africa. But without its donkeys loaded with huge panniers and accompanied by their green-uniformed handlers, Kasbah would sink under the weight of its own refuse.

At dawn, the dozen garbage collectors of the Kasbah "saddle up" their charges with "chouaris," home-made baskets made of rushes, and climb the long stairs to Bab J'did, one of the gates of the old city. There the teams split up and go their separate routes. The donkeys know their rounds off by heart. Man and beast negotiate the vertiginous streets of this medina built during the 10th century under Zirid rule, a dynasty of Berber origin that reigned over most of the Maghreb.

Sprawling over some 105 hectares (260 acres), the Kasbah is a mass muddle of buildings constructed on a steep uneven slope 118 meters (nearly 400 feet) in height. Some houses are so old and dilapidated that they would collapse if not propped up by wooden or metal beams. Scavenging alley cats The collectors gather the rubbish in bags or by hand, and once a "chouari" is full, the donkey goes all the way back to the top where its load is transferred to trucks. Each donkey load weighs up to 50 kilos, and more than 2 tonnes of trash are collected every day. Come rain, shine or searing summer heat, the Kasbah Horse Unit, as it is officially known, works a seven-day week. This method of garbage gathering dates back to the arrival of the Ottomans in Algiers in the 16th century.

Despite constant collections, the waste quickly piles up again. "We're doing about 10 rounds" a day, sighed weather-beaten Amer Moussa, 57, who said he was looking forward to retirement. If the task wasn't difficult enough already, Moussa said he was tired of rubbish being thrown anywhere, and rubble or old furniture being chucked away with household waste. Vacant lots where homes once stood have become dumping grounds where scavenging alley cats root through rubbish. Kadour Hanafi, now an executive with Netcom, which handles garbage collection in the city, is himself a former rubbish collector in the Kasbah. He said some Kasbadjis, as the residents are known, look upon them with contempt. Bad jokes as they pass are common: "Look, there's a donkey – and there's a donkey with him." Abdellah Khenfoussi, a Netcom official who grew up in the Kasbah and still lives there, fondly remembers a time when residents would wash down the paved streets every morning.

Fatma, wearing the long white "haik" dress of Algerian women, rails against the sordid conditions into which the area has sunk. "It used to be well-kept," the 74-year-old said of the Kasbah, which in 1957 was the heart of the Battle of Algiers during the 1954-1962 war of independence against France. "Everyone knew everyone else and we all helped clean up. But now most of the original residents have left, and new arrivals have no idea of the Kasbah's [historic] value," Fatma said. After climbing and descending for seven or eight hours, which is exhausting for both the collector and donkey, the dawn patrol returns to the stables. The late shift then takes over. Throughout the day, donkeys and green boiler-suited collectors are a regular sight in the historical district. There are 52 donkeys in the Kasbah Horse Unit, acq

uired in the same manner as official vehicles – by public tender – said Netcom communications head Nassima Yakoubi. Each animal must be in good physical shape, be no shorter than 1.5 metres (five feet) in height and weigh no less than 100 kilos (220 pounds). They join the unit between the ages 4-to-8 and have a working life of around 20 years. You might expect that the animals then enjoy a well-earned retirement, maybe at the zoo. That is indeed their destination, but not as residents: To the anguish of their former companions the rubbish collectors, the worn out donkeys of the Algiers Kasbah become lunch for lions.