Paintwork: Young Liberians slap on any message you want 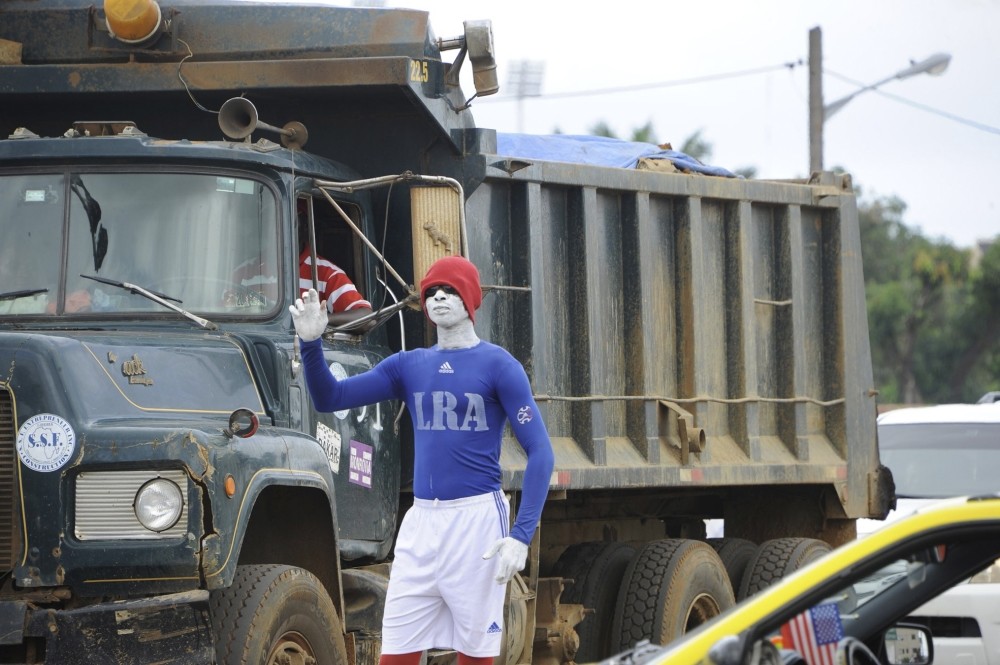 A young Liberian man stands in the sweltering heat for hours, painted head to toe in the colours of the national tax authority, at a traffic junctions.
by Jul 04, 2017 12:00 am

Standing in sweltering heat for hours at a time, painted head-to-toe in the colors of the tax authority, Emmanuel Howard has become a fixture at traffic junctions in Liberia's capital Monrovia.

He and dozens of other young men are deployed by advertising firms as colorful human billboards for client ranging from government agencies to brides-to-be.

Standing stock still on the bustling roadsides, they have become street sensations.

"I feel good being painted because this is what gives me my daily bread. Some of my friends are in the streets stealing from others," says Howard, a 25-year-old "statue."

"I take care of my child with it. I feed and clothe myself, and I pay my rent," adds fellow body painter Joseph Yarpkawolo, 27.

Body painting as a means of attracting attention in the streets began in the early 1990s with youngsters done up as mascots for the national football team, daubed in the red, white and blue of the Liberian flag.

Standing still for extended periods, or walking like robots around the outer edge of the pitch, they galvanized both players and fans.

Entrepreneurs like Emmanuel Ben, 26, founder of the Emmanuel Creation bodypaint publicity firm, were barely born at the time, but would grow up seeing a niche in the market for a highly-mobile way of attracting customers.

"DHL, Total and the Liberia Revenue Agency are among my clients," he told AFP, referring to the German logistics firm and the French oil company.

Almost anyone can rent one of these bodypaint models, who strike a pose and hold it for long periods on streets still largely free of the commercial advertising that has bloomed in other African capitals.

"Some schools, private individuals and small businesses also contact us for advertisements. I go for weddings also," Ben told AFP.

One fan of their work is Fatumata Sanoe, an 18-year-old student who admits finding it difficult to keep from staring at these curious human billboards.

"I look at them every time they come out. It is really attractive, and you sometimes want to know if they are really human because you don't see any part of them shaking," she exclaimed.

"No one can just pass without giving them some attention," she added, before hurrying off to class.

Liberia has a long history of using body paint for religious and community rituals, but this is usually done in a more private setting.

More recently, the image of a man painted white with the words "Kick Ebola out of Liberia" in orange and black emblazoned on his back was widely shared in 2015 as the country celebrated what was then believed to be the end of a deadly epidemic.

Since launching his business in 2013, Ben has built it up to 35 employees and can now charge clients $10 (nine euros) an hour for a five-hour stretch. His workers earn $10 a shift.

The body painters tend to be young men under 30 with few other options and using their body as a canvas has become a popular earner.

Legions of street children left behind by the horrific 1989-2003 war have grown into young adults in Liberia, often with large gaps in their schooling that lead many to a life of crime in an economy with stubbornly high unemployment.

"The economic situation in the country is a difficult one. There are no job opportunities for us," says Yarkpawolo.

"The only problem we face sometimes is that standing for hours under the sun can give us fever. That's the only risk we have," adds Emmanuel Howard.

Their boss at Emmanuel Creation is proud of their work.

"You can be in a taxi or walking in the street, you come across my boys and the message is given. When you see one of my statues you can't just pass, you have to stop a bit and look," Ben told AFP.

"When people come across my statues, they take a photo, what they do next is to post it on the internet," he said, lauding the viral potential of his technique.