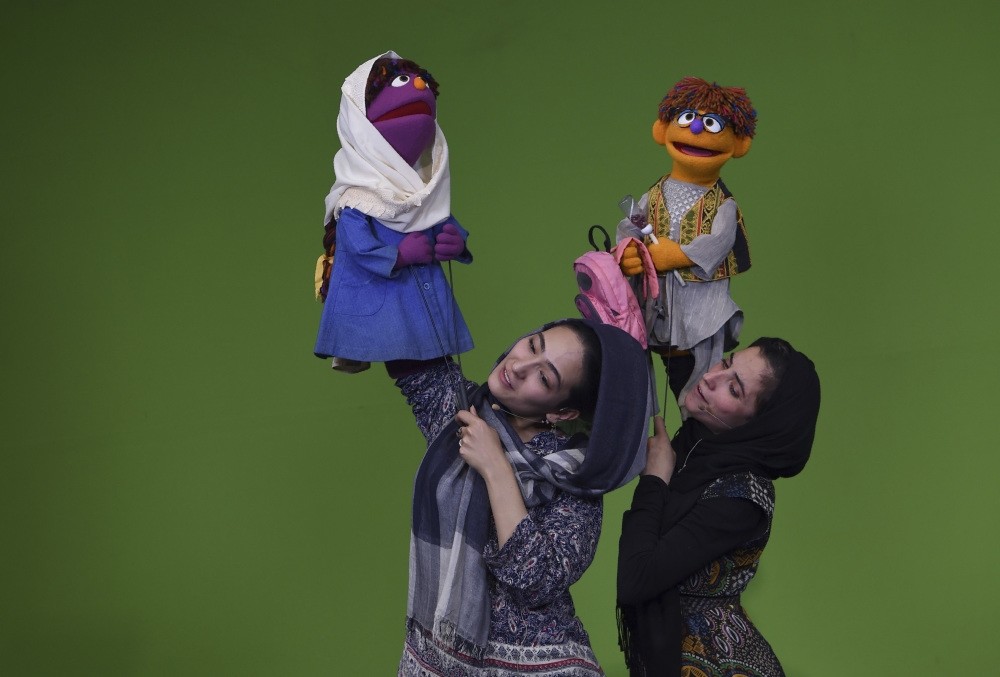 Afghan puppeteer Seema Sultani (R) holds new u201cSesame Streetu201d muppet u201cZeeraku201d as she performs with colleague Mansoora Shirzad holding u201cZariu201d during a recording at the television studio in Kabul.
by Jul 06, 2017 12:00 am

Broadcast on Tolo TV, Afghanistan's ‘Sesame Street' sets a good example for children and their parents with the portrayal of gender it presents. In a country where girls are way too underprivileged compared to boys, a girl puppet is revered by her brother as she is educated

Zeerak the bespectacled orange muppet is the latest innovation from Sesame Street in Afghanistan: A children's TV character who reveres his educated older sister, brought on to screens to show a new generation that a woman's place is beyond the home.

Producers are betting the new character - a 4-year-old boy dressed in a traditional shalwar kameez and a waistcoast embroidered in Afghan national colours will inspire millions of children and their parents - to see the value in education.

Zeerak's big sister Zari, introduced last year with great fanfare as the first Afghan muppet to join internationally cherished characters such as Big Bird and Elmo, has already proved a success on the local version of Sesame Street, known as "Baghch-e-Simsim."

Massood Sanjer, head of Tolo TV which airs the show, believes introducing a boy, who adores and wants to emulate his school-going older sibling, will "indirectly teach the kids to love their sisters" in a conservative, gender-segregated nation which traditionally has invested more in its sons.

Baghch-e-Simsim is the only program on Afghan television dedicated to children and has a remarkable reach - a recent survey showed some 80 percent of children and parents with access to television watch the show. 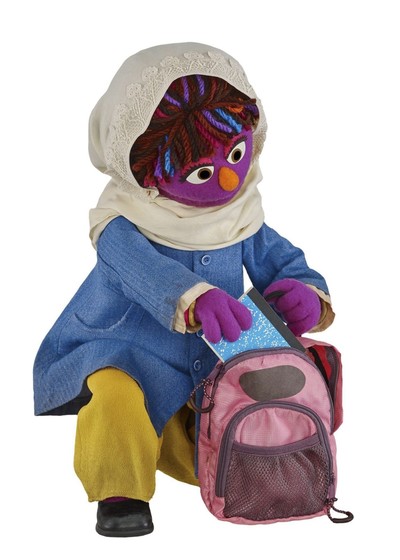 Sanjer believes the show can, from an early age, underline the importance of educated women in Afghan society, but also show boys that a good education benefits everyone.

"People - kids and parents, who have access to TV are watching and know the brand of the character. So it is a very good sign that people love to learn and it is great to use media as an education tool for kids," he told AFP.

That message still needs to be hammered home in many parts of Afghanistan nearly 16 years after the end of the Taliban's regime.

A report published last year by the National Risk and Vulnerability Assessment Center showed that just 66 percent of boys and 37 percent of girls aged 15-24 can read and write, while barely 45.5 percent of Afghans attend primary school, and 27 percent secondary school.

The broadcaster is utilizing everything it can to help change attitudes - the new muppet Zeerak's name means "smart" in Dari and Pashto, Afghanistan's two official languages. And even his trendy, black-rimmed glasses were chosen for a reason.

Producer Wajiha Saidy explains that wearing spectacles is seen as shameful for Afghan youngsters, so they wanted to address the issue and show it to be normal.

In Afghanistan, the show's attention to equality extends to its casting, with two talented female puppeteers, Sima and Mansour, lending their voices to Zari and Zeerak.

Zari is by far the favourite character on the show in Afghanistan, according to the study commissioned by Tolo which surveyed some 1,500 children and their parents.

Just 60 percent of Afghanistan has access to television, but Baghch-e-Simsim is also broadcast on the radio across 44 FM stations, says Anwar Jamilli, who runs the audio progams.

He says the show's focus on friendship and sharing brings a dose of happiness to children living with the ever-present threat of violence.

"This is very new for Afghan children," he says.