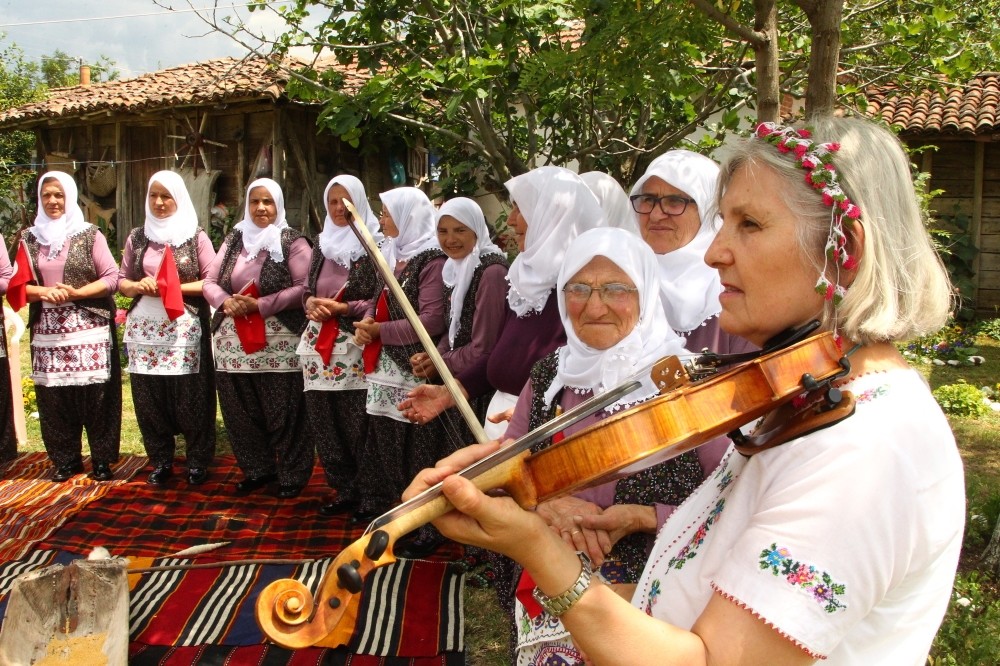 The choir, composed of 17 elderly women living in northwestern Kırklareli's Lüleburgaz district, sings the almost-forgotten folk songs of Thrace, in an effort to pass them down to future generations.

Women of the district used to get together in their spare time and sang the folk songs that they inherited from their ancestors. Realizing that the folk songs were about to fall into oblivion, the women requested help from retired music teacher Şükran Akdeniz to form a more professional choir.

Local women between the ages 40 to 80, took music lessons for an entire year and have been putting on live performances around the region for the last couple of months. The choir that performs in traditional attire aspires to give concerts in Europe as well.

Speaking to an Anadolu Agency (AA) correspondent, Günnur Yılmaz, one of the choir members, said they formed the choir to enable local women to participate in social and cultural activities during their spare time. Stating that they sing old folk songs originated in Thrace, Yılmaz continued: "Our choir is named 'Women of the Republic.' We love performing traditional folk songs. Since we formed the choir, we have been engaging with so many people who helped boost our self-esteem. We also get great feedback from the audience after the concerts."

The choir continues rehearsals in the village where they live. Most of the villager women in the choir, this is their first involvement in such a social and cultural activity since their elementary school years. "With the choir, we have a chance to recall the good old years. Through this solidarity, we are helping the future generations to remember the centuries-old folk songs. Our aim is to give live performances in European cities. We are ready to perform anywhere in Europe if we are invited," said Yılmaz, adding they are setting an example for the other women in the region.

Fatma Uludağ, another choir member, however, said women living in the villages are working very hard to earn a living. She said all they want to do is to make use of their spare time and form a bridge between the old and the new generations through the traditional folk songs.

Meanwhile, retired music teacher Akdeniz said it is amazing to see the dedication and success of the women in the choir. Stating that all women, especially those living in small villages, should participate in cultural activities, Akdeniz said: "These women are reaching out to all of humanity through folk songs. The audience loves our choir. Folk songs are the common culture of all people. Folk songs are not ordinary songs: They come from the heart and soul of singers."