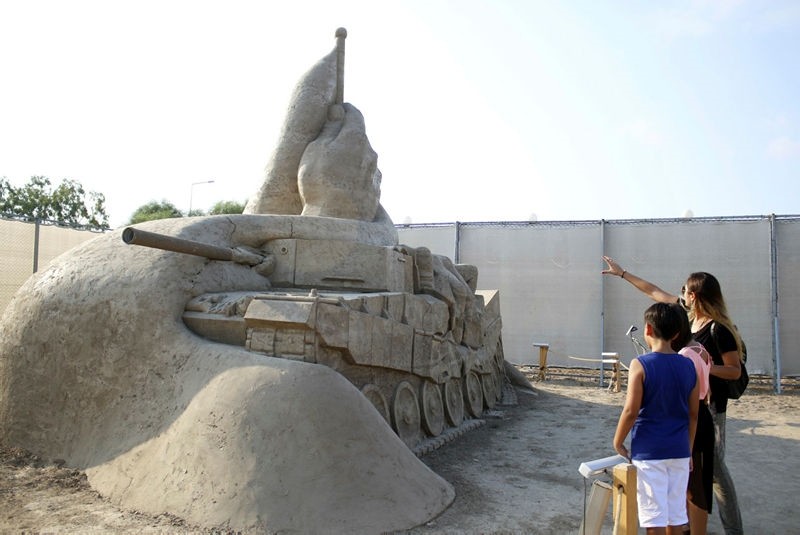 The 11th Antalya International Sand Sculpture Festival has kicked off with an opening ceremony. Under this year's theme of "Wonders of the World and Myths," the July 15 martyrs memorial that was made of 250 tons of sand, tells the story of the Turkish nation's resistance against the coup attempt.

The festival, which is located at the Sandland Arena on Antalya's Lara Birlik public beach, features sculptures by 20 artists from 12 countries. Made of a combined 10,000 tons of sand, the sculptures represent the wonders of the world and mythological heroes including the Eiffel Tower, the Taj Mahal, the Aztec temples, the Keops pyramid, the coliseum and the Forbidden City. The collection also presents sculptures of mythological heroes like Cyclopean, Wotan, Abu Simbel, Europa and Kumiho.

"The Sand Sculpture Memorial for the July 15 Day of Democracy and Martyrs," which was done in the context of the festival, has attracted a lot of attention since it was presented.

Antalya Mayor Münir Karaloğlu stated that the sand sculpture festival, which was organized for the 11th time this year, is important in terms of enriching tourism variety and encouraging tourists to spend more time out of hotels.

Karaloğlu continued to talk about the importance of the festival for city tourism, noting, "Today is the anniversary of the coup attempt by the treacherous terrorist organization, the Gülenist Terror Group (FETÖ). We will never forget that night, nor will we let people forget it. We cannot achieve this aim by meeting in city squares. We need the support of art in order to truly never forget that night. We cannot inspire people as much as these sand sculptures do simply by holding meetings and sitting in the same place for hours or writing volumes of books alone."

He stated that more art activities regarding July 15 must be conducted, saying that the sand sculpture which represents the July 15 heroes who stopped the tanks is important.

Antalya Metropolitan Municipality Mayor Menderes Türel, on the other hand, stated that they will always be prepared to support the festival to ensure its continuation. He also stressed that the number of attraction centers in Antalya, like the 11th Antalya International Sand Sculpture Festival, must be increased.

Festival Director Cem Karaca noted that there are more than 100 sand sculptures featured in the festival and the July 15 memorial has been the most popular up until now.