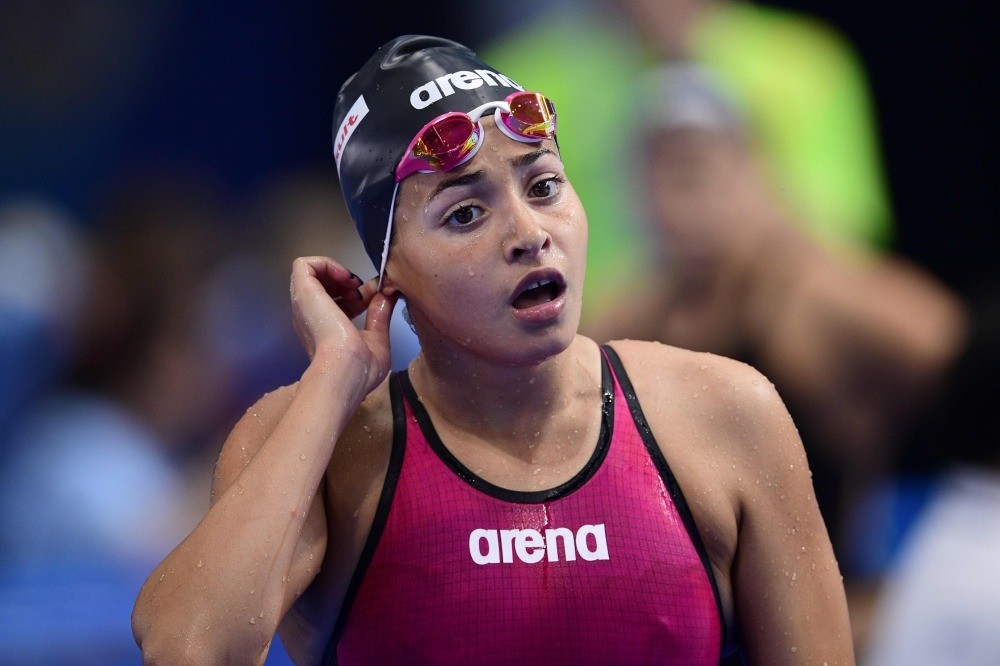 Yusra Mardini slept in fear of Hungarian border police on train station floors on her first visit to Budapest when she fled her native Syria two years ago.

Now they protect the 19-year-old swimmer as an Olympic athlete competing at the world championships.

It's been quite a change.

After her ordeal, she was stuck for a week in Hungary as part of her 25-day journey to Germany, Mardini wasn't exactly looking forward to coming back to the Hungarian capital.

"I hated the country, I hated the people. I said, 'I'm gonna come back one day, rich, a normal person, and then I can also enter as a normal person.' Because I was broken-hearted," Mardini told The Associated Press in an interview on Sunday.

"Now that I'm back I see that the people are all nice, how they are interested in the world championships. The seats are full. I think it's great," she said.

On Sunday, Mardini competed in the women's 100-meter butterfly heats, clocking 1:07.99, some 12 seconds behind top qualifier and world record holder Sarah Sjostrom. She shaved 1.22 off her time in the same event at the Olympics last year.

Mardini competed in Rio de Janeiro under the Olympic flag for a team of refugees, and again she's competing as an independent in Budapest as the fighting still rages in her native country. The 200 freestyle provides another opportunity for her Tuesday.

The Damascus native had been among Syria's brightest swimming prospects, competing for the country in both the 200 and 400 freestyle at the 2012 worlds in Istanbul.

The family moved around to avoid the fighting, but eventually the decision was taken to leave Syria altogether as the war intensified with no end in sight. Mardini had already given up swimming long before.

"I was the one who decided not to stop. There was war and so on but I was the one, I saw it wasn't working any more," she told the AP. "This was also the reason I left Syria. There was war but I could have lived there. But there was no future anymore."

Life had been reduced to mere survival.

"Yesterday she said you didn't know if you would die at home or on the street," said Sven Spannenkrebs, Mardini's first swimming coach in Berlin, who has accompanied her to Budapest for the worlds. "This is war as a normality. For us it's not normal."

Mardini and her older sister left Syria in early August 2015, joining the wave of refugees who had lost hope of the conflict ending. They went first to Lebanon, then Turkey, where they paid smugglers to take them to Greece.

Mardini has told the story of their hazardous journey on the Aegean Sea many times, of swimming for her life when the overcrowded inflatable dinghy started taking on water even after their luggage was thrown overboard.

"The engine broke and we had to swim 3½ hours to arrive to the other side. Me and my sister and two guys," Mardini said. "My sister jumped in the beginning and then I jumped after her. We didn't swim normally, but we had a hand on the boat and hand swimming and then kicked."

Through their efforts dragging the boat, they eventually made it to the Greek island of Lesbos. An overland trek followed through Macedonia, Serbia and Hungary, where she experienced the worst conditions along her weeks-long journey. They hid from police, got arrested at borders, had belongings stolen and lost money on tickets as authorities refused to let trains pass.

"Hungary was awful. It was really hard," Mardini said. "Hungary was the biggest fear for all the refugees."

Eventually, the Mardinis made it to Berlin, where an Egyptian translator at their refugee shelter put them in touch with a local swimming club, where they met Spannenkrebs. He quickly realized Mardini's potential and helped her make the International Olympic Committee's refugee team for Rio last year.