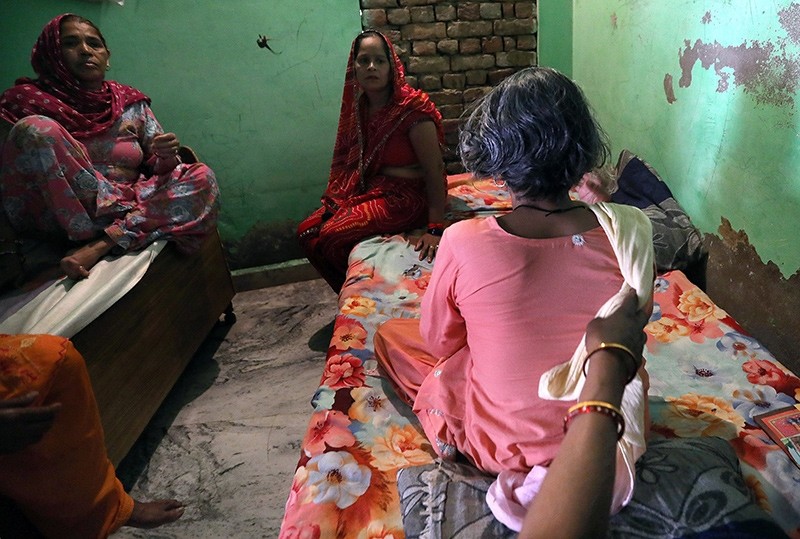 Shri Devi, the 49 years old victim whose braids chopped off allegedly by unknown person, sits with her back to the camera inside her house in Kanganheri village, the outskirts of Delhi, India, 01 August 2017 (EPA Photo)
by Anadolu Agency Aug 03, 2017 12:00 am

Across Haryana, Rajasthan, Delhi, Uttar Pradesh and Madhya Pradesh states, women have reported the appearance of a mysterious figure, losing consciousness and waking to find their cut locks lying on the floor.

The incidents have been ascribed to witchcraft, a gang trying to terrorize people or mass hysteria.

The Hindustan Times and other newspapers reported that an elderly woman was killed by villagers near Agra, Uttar Pradesh, on Tuesday after they assumed she was the "ghost barber".

Her family said the 62-year-old was simply lost in a strange neighborhood at night.

More than 40 cases have been reported to police over the last two weeks. "We are investigating the matter," Ravinder Kumar, a police spokesman in the city of Gurgaon, to the southwest of New Delhi, said.

"This is something very strange… Police teams have been working to crack the mystery behind such bizarre incidents. People should not believe in rumours."

The first case was reported last month, when a woman told police in Gurgaon that she was preparing dinner alone when she spotted a strange-looking man with a trident standing at her door.

She closed the door but the man reappeared and she lost consciousness. When she awoke, she found her cut hair lying next to her, The Indian Express reported.

Many have blamed the reports on mass hysteria. "Those women who spent most of their time inside their house gets affected by such things," psychiatrist Pramod Soni said. "Illiteracy may be another reason for such things."

Rural India, in particular, has been prone to cases of mass hysteria in the past.

A monkey-like creature was said to have attacked people in New Delhi in 2001 and a year later, people in eastern Uttar Pradesh reported their faces being scratched by a light-emitting flying object at night.

In 1995, people across the country reported seeing idols of the Hindu god Ganesha drinking milk.