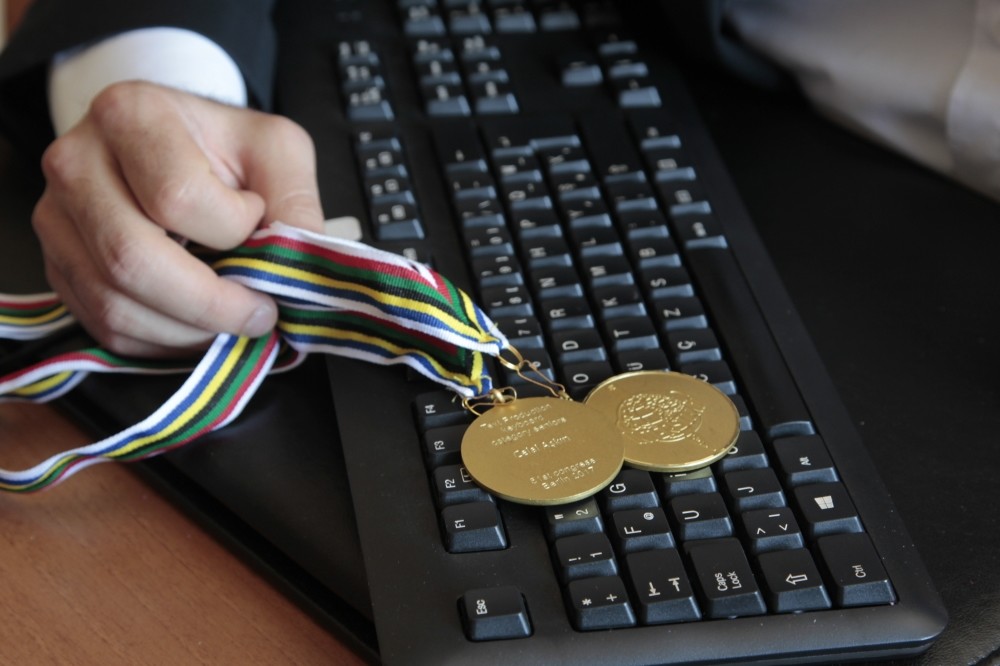 After mastering lightning-fast speed on the F-keyboard at Gümüşhane Vocational High School of Justice, Celal Aşkın went on to win 18 grand prizes in the field, four of which were world championships. Recently at a world championship in Germany, Aşkın broke his own record, winning two new awards in the name of his homeland.

After completing high school in 2002, Aşkın continued to improve his typing skills at Istanbul University Vocational School of Justice and studied under İhsan Sıtkı Yener, inventor of the F-keyboard, known as the "Turkish National Keyboard."

Aşkın won his first title at the Turkey Championship in 2007 and has held onto the title for 10 consecutive years since. He also won the grand prize four years in a row at the world championships.

Attending the 51st INTERSTENTO Congress and World Keyboard Championship, organized by the International Federation of Information Technologies and Communication on July 22-28 in Berlin, Aşkın became world champion by breaking his own record, increasing his key strokes from 22,500 to 23,738.

He won in a new category by completing an eight-minute voice decipher with only four errors, becoming the first-time champion for Turkey in the category of transcription.

Serving as a bailiff at Kahramanmaraş's Pazarcık Court House, Aşkın spoke to Anadolu Agency (AA) and stated that fast typing, a hobby for him at first, turned into a passion over time, and now his passion has rewarded him with a total of 18 championships.

Aşkın also discussed his last world championship in Germany. In the category of "30-minute-old hands," he completed the error-free speed contest with 23,738 strokes and precisely 151 words in a minute.

Expressing his happiness about his success, Aşkın said he has added two more world championships to his portfolio after the first four.

Stating that he improves his fast typing skills every year, Aşkın spoke about breaking his own record with 23,700 strokes in a minute.

Attributing his success to the national F-keyboard, Aşkın said: "At this year's championship, there were about 500 participants from 26 countries. Every one of them attended the contest with their own keyboards. We, as the Turkish national team, attended with F-keyboards. We won the first three categories, really leaving an impression. It was like a Turkish championship. It is quite hard to take the first three categories at the world level. We succeeded as the Turkish National Team thanks to the F-keyboard. Both our strokes and rankings are quite high. By looking at our rankings, it is easy to appreciate the F keyboard's convenience for fast typing."

Aşkın evaluated their success as the Turkish National Team in terms of scores: "In the championship, we proved that one Turk is worth the world, and we are proud of this. No one can stop us in the championships. We officially registered Turkey as number one in fast typing."