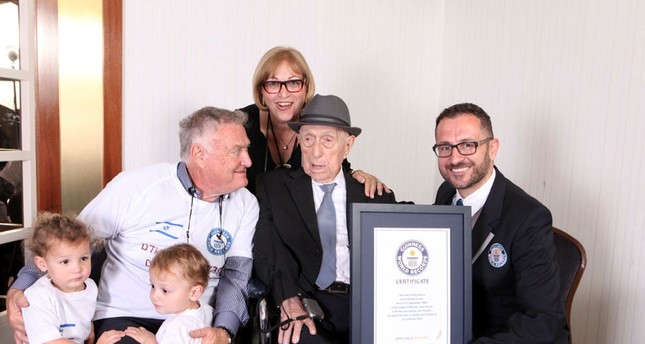 Since he was an observant Jew, his family could not be reached on Friday evening, the onset of the Jewish sabbath.

"Yisrael Kristal... died on Friday a month before his 114th birthday," Haaretz daily reported in its online edition.

Kristal, originally from Zarnow in what is now Poland, was born on September 15, 1903 -- three months before the Wright brothers' first successful powered airplane flight.

Guinness World Records recognized him as the world's oldest man in March 2016.

In September he celebrated his Bar Mitzvah after a century-long delay.

Usually marked at 13 for boys and 12 or 13 for girls -- a Bat Mitzvah in that case -- it marks the transition into someone responsible for his or her actions.

Kristal was unable to celebrate his Bar Mitzvah in 1916 because his mother had died three months earlier and his father was a soldier in the Russian army at the time of World War I.

"My father is religious and has prayed every morning for 100 years, but he has never had his Bar Mitzvah," his daughter Shula Koperstoch told AFP last year.

After World War I, Kristal moved to Lodz where he worked in the family confectionery factory, married and had two children.

But his life was disrupted when the Jewish quarter of the city became a ghetto under Nazi occupation during World War II and Kristal was sent to the infamous Nazi death camp Auschwitz-Birkenau.

Around 1.1 million people, most of them European Jews, perished in the camp between 1940 and 1945 before it was liberated by Soviet forces.

His wife and two children died but Kristal survived, weighing just 37 kilos (81 pounds) at the end of the war.

He then moved to Israel, where he remarried and opened a sweet shop.

Share on Facebook Share on Twitter
Previous in Life Around 1,000 cat lovers have requested to adopt eight smuggled Scottish... Next in Life Antalya's Kaş district, renowned for its crystal-clear blue sea, has...
DAILY SABAH RECOMMENDS