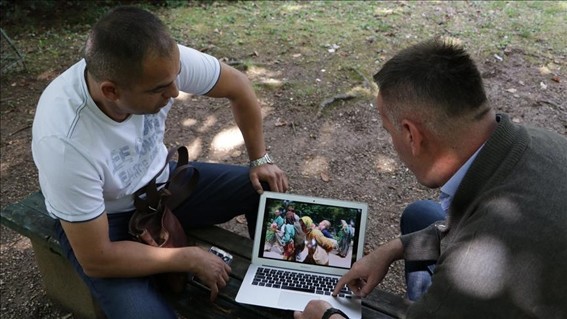 Survivors of the 1995 Srebrenica genocide have told Anadolu Agency the catastrophic situation facing Rohingya Muslims in Myanmar reminds them of the trauma they faced during the Bosnian War.

"The world is still silent, as it was in Srebrenica," Muhamed Omerovic, one of the survivors of the 1995 killings, told Anadolu Agency in Sarajevo.

Omerovic was 18 when the war broke out in 1992. He was forced to wander for a week inside a forest after Srebrenica was occupied by Bosnian Serb forces.

More than 8,000 Bosnian Muslim men and boys were killed when Bosnian Serb forces attacked the U.N. "safe area" in July that year, despite the presence of Dutch troops tasked with acting as international peacekeepers.

"The 'death road' was the name given to the escape route by those fleeing the killings; it was a road filled with death and traps," Omerovic says.

He says he feels the same pain in his soul and body over the situation Rohingya Muslims are facing now.

Idriz Smajic, another Bosnian survivor, who was 17 in 1995 and lost his leg during the war, said: "We experienced 22 years ago what Rohingya Muslims are living today. People who tried to run away were killed and imprisoned... Civilians were killed in the area under U.N. protection."

He called on the leaders of the international community to act against mass killings, saying he cannot believe how world leaders remain indifferent to the deaths of innocent children.

Since Aug, 25, hundreds of thousands Rohingya have crossed from Myanmar's western Rakhine state to Bangladesh, according to the U.N.

The refugees are fleeing a fresh security operation in which they have said security forces and Buddhist mobs have killed men, women and children, looted homes and torched Rohingya villages.

According to Bangladesh, around 3,000 Rohingya have been killed in the crackdown.

Turkey has been at the fore of providing aid to Rohingya refugees and President Recep Tayyip Erdoğan has said he will raise the issue at the U.N.

In a report, U.N. investigators said the human rights violations may have constituted crimes against humanity.