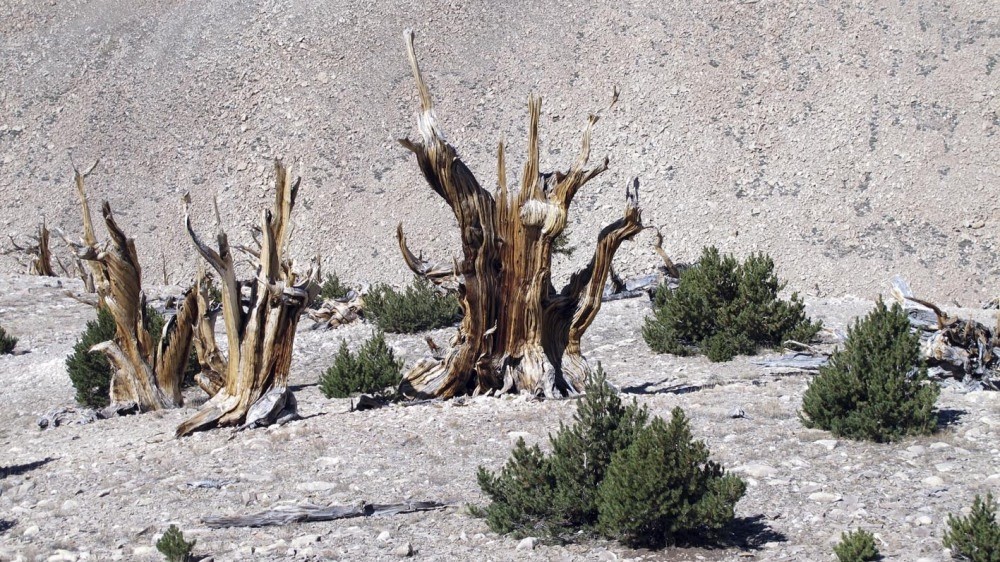 The bristlecone pine tree, famous for its wind-beaten, gnarly limbs and having the longest lifespan on Earth, is losing a race to the top of mountains throughout the Western United States, putting future generations in peril, researchers said Wednesday.

Driven by climate change, a cousin of the tree, the limber pine, is leapfrogging up mountainsides, taking root in warmer, more favorable temperatures and leaving little room for the late-coming bristlecone, a study finds.

Researchers compare the competing tree species to a pair of old men in a slow-motion race up a mountainside taking thousands of years, and climate change is the starting gun.

"Limber pine is taking all the good spots," said Brian Smithers, a Ph.D. candidate at the University of California, Davis, who led the research. "It's jarring."

The bristlecone pine can live 5,000 years, making it the oldest individually growing organism on the planet, researchers say.

Forests of the diminutive bristlecone pines are found in eastern California, Nevada and Utah. They thrive in desolate limestone soil that is inhospitable to most trees. They grow at high elevation, hammered by wind and extreme temperatures.

The punishing conditions give shape to their twisted limbs. To survive long dry spells, parts of the tree dies and sheds its bark appearing dead, except for small spouts of green pine needles, signaling life, researchers say.

Among the oldest and most famous is Methuselah standing in the White Mountains of eastern California. It remains unmarked among its grove, so vandals cannot find it.

The three-year study involved counting the trees newly sprouting within the last 50 years above the historical tree line. Most of those growing at the higher elevation are limber pine, researchers said.

Smithers said he could not estimate how many bristlecone pine trees exist throughout the Western U.S. They are not at risk of extinction, but they could be crowded out in some places they've grown for thousands of years.

This research on climate change's impact on these two species of trees can be used to understand more complex forests with several types of trees harvested for timber, Smithers said.