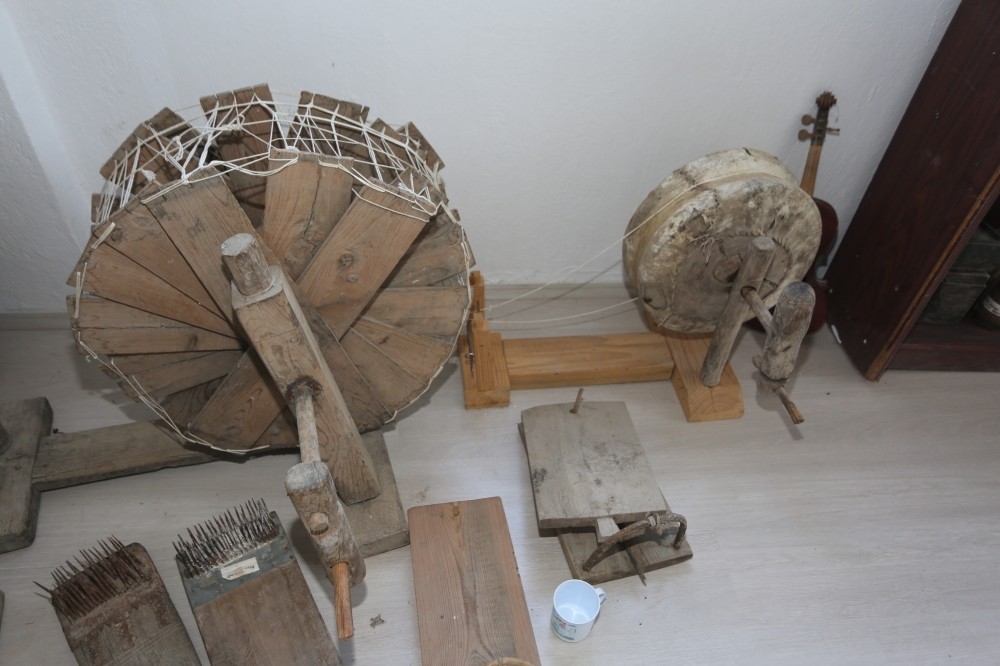 Tahtacu0131 Turkmens have turned a part of their village's cemevi into a museum in an effort to keep their culture alive for future generations.
by Anadolu Agency Nov 08, 2017 12:00 am

Tahtacı Turkmens living in the Göksu neighborhood of Mersin's Mut district have turned a part of their "cemevi" (Alevi house of worship) into the Tahtacı Museum to keep their culture alive and to teach it to future generations.

Located on the Taurus Mountains between the Karaman and Mersin provinces, the neighborhood is divided into two by the Göksu River. On a part of the bridge over the river, villagers known as "tahtacı," meaning woodworker, live. Having lived as nomads in the forests of the Taurus Mountains for hundreds of years and settling in the region nearly 100 years ago, Tahtacı Turkmens are also known as "tahtacı" since they make wooden goods used as gates, windows and decorative ceilings.

The now sedentary, Tahtacı Turkmens have turned a part of their village's cemevi into a museum in an effort to keep their culture alive for future generations.

Recalling that they settled in this neighborhood in the beginning of the 1900s, Özcan said: "When our people came here, they did carpentry in the villages of Mersin and Karaman and sold the wooden goods they made. All of their materials were made of wood since they had lived a nomadic life. They used wood for making spoons, plates, glasses, knickknacks and cradles. Very few people around the world work with wood nowadays. However, it is possible to see these products throughout the Taurus Mountains, even in Anatolia, but the skills haven't been passed on to the new generation."

Özcan explained that they created a culture room at the cemevi after one of the neighborhood residents, Hüseyin Cılız, donated the pieces he had collected for years.

"There are many pieces that demonstrate the skills of the woodworking masters. As far as I know, a museum like this can only be found here and in the Balıkesir province. Maybe it isn't a complete museum, but we have enough material. We will pass on our history to the next generation. We have a lot of visitors. We are the ones who are trying to keep old Turkish culture alive. These things are a part of our Khorasan culture. They don't only belong to us. We shouldn't forget our past," Özcan said.

Cılız, who donated his collection to the museum, also said he wanted to put the things he collected to good use.

Cılız said he admires the beauty of the pieces. "The pieces here are all things that used to be in the villages in Anatolia. Winding wheels, plows, saws, mortars and cradles are things that have been used in our villages for years. All of them are handmade. The people who come here to visit can see how difficult woodworking was in the past. There are interesting items, such as decorated boxes for spoons, wooden boxes for beads, steel used for making a fire, tinderboxes and many other devices. My only aim is to introduce our culture to everyone," he said.