From homeless to hero; London barista calls for Change Please 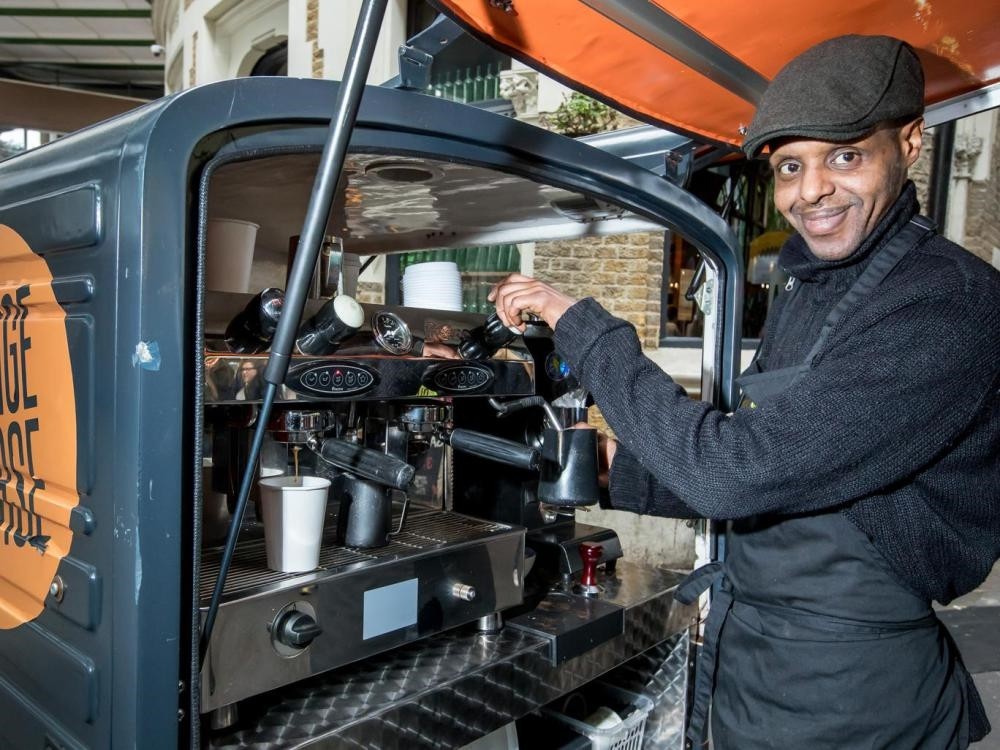 Abobaker serves coffee from a motorized coffee cart for the social enterprise Change Please, after 12 years of homelessness.
by Nov 09, 2017 12:00 am

"I heard a girl screaming like she was being mugged or raped," he said. "She was pointing at a woman standing on the bridge. Then the woman just jumped."

Abobaker, 44, is recalling the day in 2010 when he jumped into the freezing November waters of the Thames to rescue a young woman.

After being awarded a medal for gallantry by Queen Elizabeth in 2012, Abobaker found himself on the streets again following the break up of a relationship.

But he's now in temporary accommodation and serves coffee from a motorized coffee cart for the social enterprise Change Please, after 12 years of homelessness.

"Let me tell you something: most people are only one pay cheque away from being homeless," Abobaker said.

Change Please trains homeless people as baristas and puts other support in place - Abobaker said he had received a haircut and some clothes before starting training.

The social enterprise now has five carts around London and outlets inside the offices of food company Kraft Heinz and publisher Time Inc, it says.

The numbers of homeless in Britain are rising, according to the homelessness charity Crisis, which said 4,134 people slept rough across England on any given night in 2016 - a 16 percent increase on 2015 and more than double the amount in 2010.

Change Please, its name a play on the stereotypical plea of homeless beggars, aims to feed the skills gap of the booming British coffee sector by training homeless people to be baristas.

The organisation pays its workers a decent wage, helps them to open a bank account and with housing to lift them out of homelessness, it said in an online video.

It joins a new wave of social enterprise cafes in Britain, which aim to make a profit and give something back to communities.

"We have built this social enterprise on being a 'pick me up, not a hand out' for the people involved and it is their hard work that has got their lives moving in the right direction," Change Please founder Cemal Ezel said in a statement.

Abobaker now works from a cart in Borough Market, just down the road from the scene of his rescue under Blackfriars Bridge.

"It was very, very cold that night but I was full of adrenalin. I grabbed hold of her and swam as hard as I could back," Abobaker said. The pair were taken to hospital before being discharged.

The trained chef first became homeless after a divorce from his wife in Denmark left him back in London suffering from depression. He experienced people trying to set him on fire and stealing from his pockets whilst sleeping rough.

Abobaker thinks the government should set up companies that offer people training and employment and aims to establish a restaurant employing homeless people himself one day.

For now he is happy working for Change Please, who he said are understanding of his mental health struggles.

"They understand my situation with depression, that I have good days and bad days," he said. "It's one step at a time."