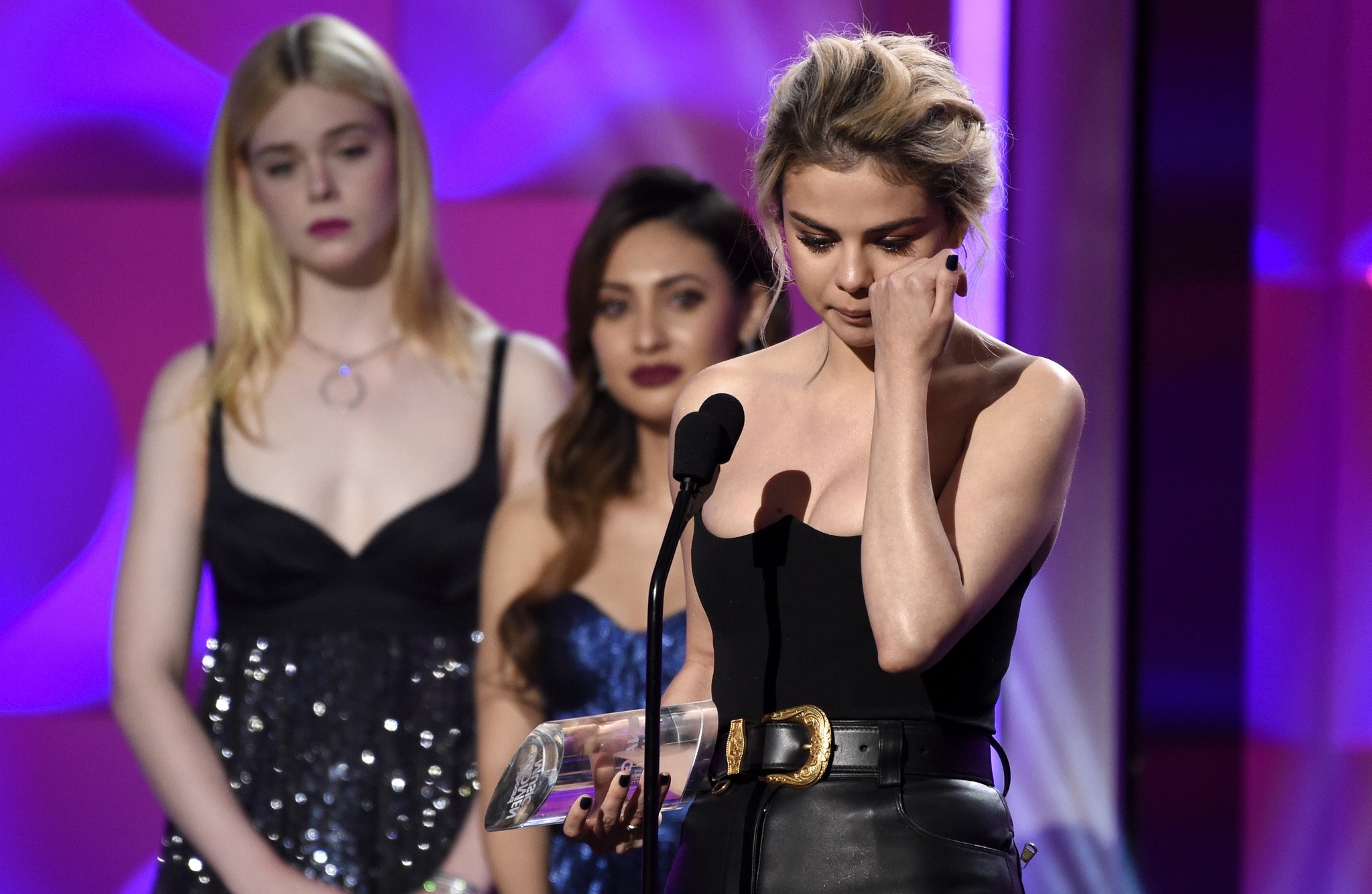 Selena Gomez wipes a tear as she accepts the woman of the year award at the Billboard Women in Music event at the Ray Dolby Ballroom on Thursday, Nov. 30, 2017, in Los Angeles. (AP Photo)
by Associated Press Dec 01, 2017 12:00 am

Selena Gomez received top honors Thursday at the annual Billboard Women in Music event, but the singer felt the recognition may have been misplaced.

"To be honest, I think Francia should be getting this award because she saved my life," a tearful Gomez said of actress Francia Raisa, who donated her kidney to Gomez earlier this year.

Raisa presented the woman of the year award to Gomez, who had a transplant due to her struggle with lupus.

"Specifically this year, I would like to thank my amazing team and my family because they stuck with me through some really hard times. And I got to do a lot this year, even though I had a couple of other things to do," Gomez told the crowd at the Hollywood gala.

"I've never felt as proud to be a women in the industry than I do today," Gomez said while adding how crucial it is that voices "are being heard for the fist time."

The wave of sexual harassment allegations rocking the entertainment industry was touched on throughout the evening.

"This year we have all witnessed the power of speaking up to share our truths," said host Ciara while kicking off the evening. "Lets all remember how important it is that we use our voice so that the next generation's path has less resistance, less hate, less sexism, less body shaming, and let it be said loud and clear - less harassment."

Earlier Thursday music mogul Russell Simmons stepped down from the companies he founded after a second allegation of sexual misconduct was leveled against him.

"Now it's time to change the industry for the better," said Greenwald, who was named executive of the year. "It's all right here in how we support each other and how we're committed to providing young women with a safer environment, free from harassment and discrimination."

Singer-songwriter Ed Sheeran presented the award to Greenwald, calling her "a warrior and a tank."

Clarkson received the powerhouse award and told the crowd that she's tired of seeing women pitted against one another.

"Accept the fact that there is room for everyone," she said. "Once women start really respecting each other as women and artists and all of that, then men will."

Taraji P. Henson presented the icon award to Mary J. Blige. The Grammy-winning legend said her path to success has not been easy.

"I'm a fighter and I'm here and I'm gonna keep fighting for every woman everywhere," said Blige. "I'm out there fighting for you."

Cabello was honored as a breakthrough artist. The former Fifth Harmony member performed her sultry single "Havana," which hit No. 1 on Billboard's pop songs charts this week.