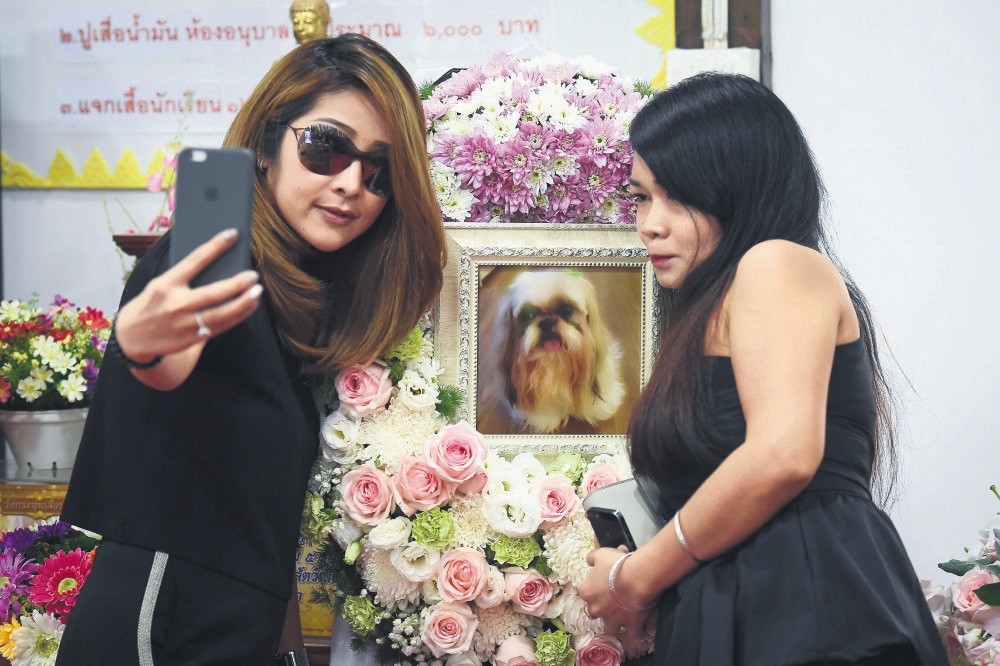 Pimrachaya Worakijmanotham (L) and her friend take a selfie with a photo of Dollar, her six-year-old Shih Tzu, during the pet's funeral.
by Dec 05, 2017 12:00 am

Buddhist monks chant next to a pink coffin where Dollar's small body is nestled among flowers - a $600 final farewell for the Shih Tzu at a Bangkok temple that administers elaborate pet funerals.

Dollar's owner, Pimrachaya Worakijmanotham, fights back tears as she takes a last fond look at her six-year-old dog whose tousled grey-white body rests under jasmine garlands.

"This is the last time I can be with her ... so I want Dollar to receive good things," Pimrachaya, dressed in black and wearing sunglasses, told Agence France-Presse (AFP), with a framed photo of "her child" Dollar behind her.

Pet cremations, complete with Buddhist rituals, are popping up across Bangkok for dogs, cats and even monkeys.

In a devout Buddhist kingdom where religion and superstitious beliefs entwine, some pet owners believe the monk-led sendoff will boost their pets' chances of being reincarnated as a higher being.

According to Buddhist belief, merit garnered in each life can eventually leads to nirvana, the state of non-suffering.

"In this life, [Dollar] couldn't go to the temples to make merit for herself. This is the only thing we can do for her," Pimrachaya, who is a banker, said.

The trend is not unique to Thailand - in Japan people are particularly fond of lavish goodbyes for their pets.

But in Bangkok it is catching on fast as Thais increasingly see pets as family members.

At least three temples offer daily services, including a monk-led ceremony, cremation and sprinkling of ashes in rivers - the symbolic ritual of returning earthly remains to nature.

Theerawat Sae-Han, the founder of Pet Funeral Thailand, says his company cremates more than 200 animals each month, from cats and dogs, to monitor lizards, snakes and baboons.

"Successful or famous animals like champion fighting cocks will also be brought for cremation," said Theerawat, a former pet salon owner who jumped into the "good" business of full-blown pet cremation four years ago.

Surging demand for his service also reflects the shrinking public spaces in the bustling Thai capital.

"Before, we buried them in authorized parks or backyards, but now it's rare to find ones in Bangkok," said Phrakru Samu Jumpol, a monk at Wat Krathum Suea Pla.

His temple has partnered with Theerawat's company and now has a ceremonial compound and cremation chambers.

While it makes for a good business - starting prices are around 3,000 baht ($91) but the most extravagant services cost up to 100,000 baht - the monk says the funerals have brought people closer to religion.

"Some people might not have a chance to come to the temple at all. When their pets die, they come here," Jumpol said, adding that pet owners are taught the Buddhist lesson that "all things are temporary."

So far, the temple has not faced criticism for its business links.

Thailand's junta is examining temple finances across the country as it seeks to improve the image of a religion that has been hit by a stream of financial scandals in recent years.

For pet owners, the service provides spiritual succor at a time of great pain.

At the end of a ceremony to spread the ashes of her Siberian husky Maprang in November, teary-eyed Tipaporn Ounsiri found cause for optimism.

"If the next life exists, please come back and be my daughter, don't be born as a pet anymore," she said.