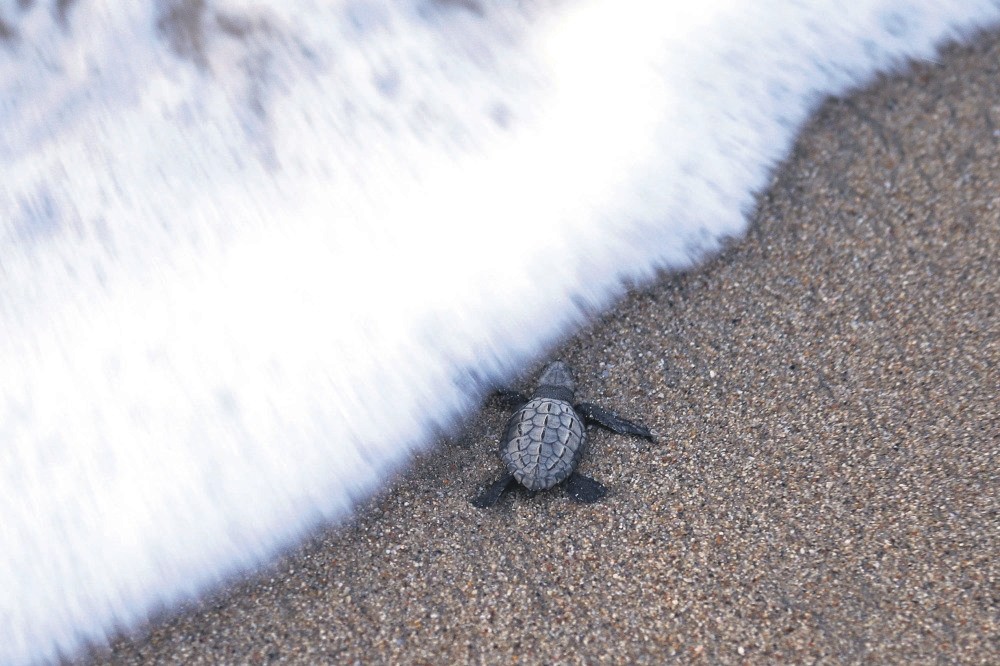 Kenya's sea turtles are increasingly under siege from humanity's plastic binge.
by Dec 06, 2017 12:00 am

Once a delicacy in Kenya, sea turtles now face extinction due to the plastic waste in the oceans, urging environmental NGOs to hold protective campaigns

Gently, Kenzo the sea turtle is lowered onto a beach where a scattering of bottle caps, candy wrappers, yogurt cups and discarded flip-flops scar an otherwise idyllic setting.

As its human handlers step aside, Kenzo struggles out of the harness, pushes hard with its flippers on the sand and slides into small waves specked with bits of plastic trash.

With a final gulp of air, the hawksbill turtle executes a perfect butterfly stroke and disappears into deeper water - a rare, lucky escape for one of Kenya's sea turtles, increasingly under siege from humanity's plastic binge.

Dozens of the endangered creatures need rescuing every year around the coastal town of Watamu, where plastic litter accumulates in the Indian Ocean and the beach from as far away as Indonesia, Madagascar and Yemen, according to the product labels.

Most common are bottle tops, but there are also cigarette lighters, toothbrushes, food containers, different lengths of string, drinks bottles and of course, the ubiquitous plastic shopping bag.

Turtles confuse these items, bobbing and fluttering about in the ocean currents, for jellyfish or other prey, to their peril.

"It causes a blockage ... but they're still hungry so they keep eating, and it compounds, compounds, compounds and they explode on the inside," said Casper van de Geer, manager of Local Ocean Conservation, which runs the Watamu turtle rescue.

"Or they are in such pain that they recognize that they have to stop eating, and they basically starve," he told Agence France-Presse (AFP) at Watamu's Blue Lagoon as he repeatedly bent down to pick up one piece of beach litter after another.

Many turtles are found floating, barely alive, having eaten so much plastic that they become buoyant and can no longer dive into the depths where they live and feed.

Once they reach this point, few can be saved.

At a turtle "clinic," Van de Geer and his team tube-feed laxatives to the turtles in hopes that the intestinal plug can be loosened.

"It takes a while but eventually after a lot of pain, and I mean it's a reptile so it can't express pain like a mammal can in its face, but you can see that it's just closing its eyes and it's all sort of tensed up and all of a sudden 'poof,' it all comes out," he told AFP.

Plastic ocean pollution is a key item on the menu for ministers from over 100 countries gathering in the Kenyan capital of Nairobi for a three-day United Nations Environment Assembly (UNEA) starting Monday. The problem is a global one, affecting all of the oceans and hundreds of animal and plant species.

According to the environmental group, the World Wildlife Fund (WWF), 8.8 million tons of plastic enters the ocean every year, the equivalent of a garbage truck dumping a full load every minute.

Plastic is cheap, versatile and nigh-indestructible, and by now it is pretty much everywhere.

A shopping bag is estimated to degrade over hundreds of years, and harder plastics could be around for millennia before they are broken down and absorbed in the environment.

In July, U.S. researchers said more than 9.1 billion tons of plastic had been produced to date, most of it dumped into landfills and oceans.

Ahead of the UNEA meeting to tackle the scourge of pollution, United Nations Environment Programme (UNEP) head Erik Solheim urged action to stop the oceans from becoming a "plastic soup."

On current trends, he warned, "By 2050 there will be more plastic in the seas than fish."

In Watamu, the locals do what they can.

"Some plastic is brought from the sea. Some others is from ... when people they come for the enjoyment on the beach, for the barbecue, the picnic," he says, pointing to large piles of collected rubbish, divided into categories, with a special heap for shoe soles.

"Sometimes I find [plastic] in the stomachs" of the fish he catches. "Ropes, the small ones. Because when the fish goes to look for some prey ... when it finds something like this ... it will think maybe it is something to eat."

Elsewhere in town, a project called Regeneration Africa melts and treats the plastic gathered by volunteers like Iddi, and molds it into paving stones and other materials to sell for funds to continue the anti-plastic drive.

Fisherman-turned-environmentalist Kahindi Changawa, 40, looks with a smile over the tank for Kai, a green turtle that has been recovering from plastic ingestion at the Watamu rehabilitation center for nearly a month.

Green turtles were once a delicacy in Kenya, but may no longer be eaten under laws designed to protect the endangered species from extinction.

Kai was brought in emaciated and unable to stay underwater. On top of the laxative, it was given anti-bacterial and anti-parasitic medicines, and appetite-boosting multivitamins.

For six days now, no plastic has been spotted in the turtle's stool, Changawa says with tangible relief.

"It has fully recovered, when you take it out [of the recovery tank], it is flapping, it is fighting," he said.

"It's a very successful story. We are hoping to release it if not today, in the next two days or so."

Many others will not be so lucky.