Love but above all peace: New Year wishes in Damascus 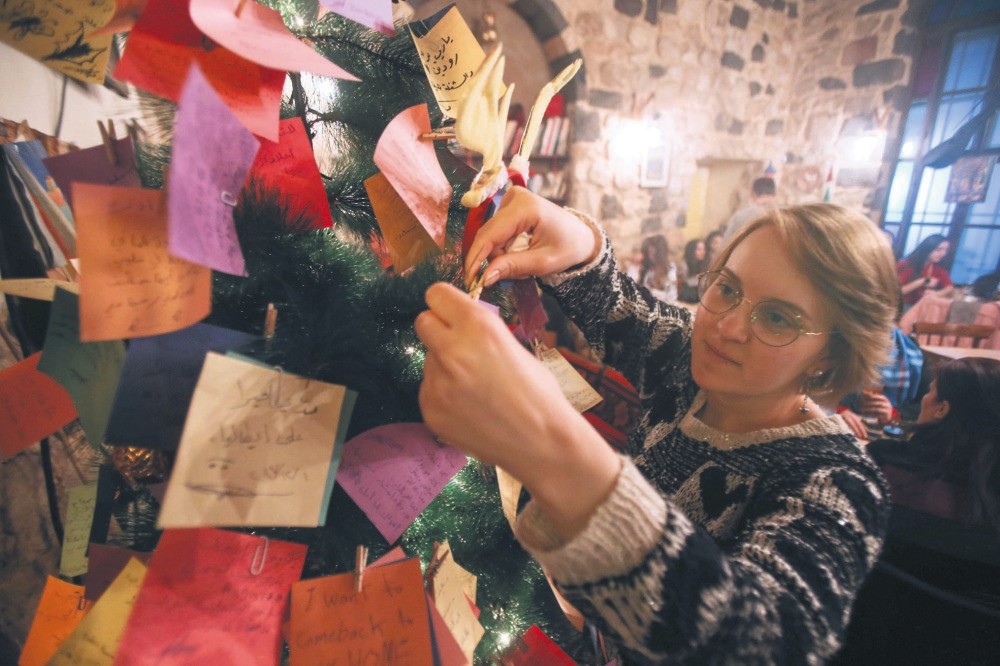 A Syrian youth hangs New Year wishes written on a card on a Christmas tree in the Zeriab coffee shop in the Syrian capital Damascus.
by Dec 19, 2017 12:00 am

In a cozy Damascus coffee shop, university student Solaf Hammoud scribbled a heartfelt New Year's wish on a yellow card then hung it on a twinkling Christmas tree.

Instead of tinsel and baubles, the tree is decorated with a simple string of lights and dozens of colored squares bearing the hopes and prayers of Damascenes, war-weary after nearly seven years of conflict.

"I hope all of my displaced friends come back as soon as possible," reads Hammoud's invocation. The 25-year-old says she does not have many new wishes this year but would really like is to start her own media program and study in Paris.

"All my childhood dreams are still in my head," said Hammoud, her long, dark hair draped over a white knitted sweater.

"Every year I stand in front of the tree and wish for them again. Maybe they'll come true one day, but the most important thing is that we still have hope - that we keep trying until they come true."

Although Syrians are predominantly Muslim, many celebrate Christmas.

The candle-lit Zeriab coffee shop was teeming with young Syrians, sipping warm drinks and chatting while a soft, jazzy tune played in the background.

As new customers walked in, they marveled at the tree and snapped a few pictures before writing their own wishes on red and pink strips of paper.

"I want to travel. That's it," one read, and another said, "I wish I could find the girl that's on my mind."

But others included the painful prayers of a generation exhausted by war, including many young men hoping to evade Syria's compulsory two-year military service.

'Holidays stopped for everyone'

"Our wishes have gotten very weird - we wish not to get hurt or that we leave the house and come back safe," says Mohammad Sharaf, 22.

"Someone else might wish he could just stay home and not have to leave ... or keep studying at university without any problems."

Although it has been spared the massive destruction wrought on other Syrian cities, Damascus still faces regular rocket and mortar attacks by rebel fighters entrenched in its outskirts.

More than 340,000 people have been killed in Syria since the conflict began in March 2011, and over 5 million people have fled abroad as refugees. For Raghad Jarmqani, hope for the safety of her loved ones has become more than just a wish.

"These are things we ask for every day: That nothing happens to [those we know], that the mortars stop and the war ends ... These are prayers now, not wishes," says the 29-year-old housewife.

Her husband, Bernard Jumaa, owns Zeriab and said he started the Christmas tree tradition three years after the start of Syria's conflict.

"The holidays stopped here for everyone," the 39-year-old recalls, saying he eventually decided to try bringing Christmas cheer back to Damascus by decorating his cafe.

"But we all wished the war would end and things would go back to the way they were before. This is how we got the idea that our Christmas tree becomes a wishing tree."

Customers often jot down wishes about getting married, seeing long-lost loved ones or waking up to find that the last seven years in Syria were just a bad dream.

Jumaa even receives wishes from outside Syria, "Those that left want to come back, and those that are still here wish they could leave."

His own invocations have remained the same over the years, he tells Agence France-Presse (AFP).

"My wish every year and every moment is for the bloodshed to stop, for me to blink and hear there's a final cease-fire in Syria," says Jumaa. "As long as the war continues, I'll put up this tree - because the smallest thing someone can do in the shadow of war is to wish, to imagine."