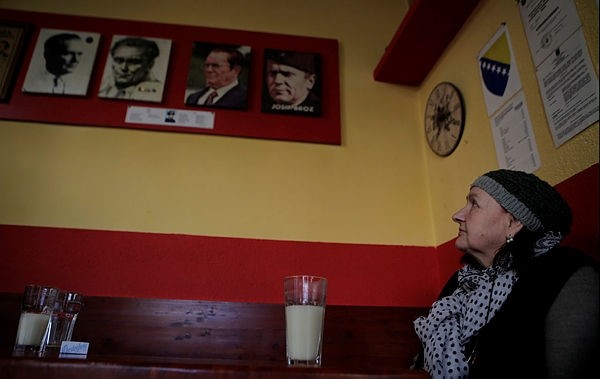 Famous for boza and photographs of Yugoslavian leader Josip Broz Tito, Bajramovic pattisserie is a popular venue for Sarajevo locals.
by Anadolu Agency Jan 15, 2018 12:00 am

"Bajramovic" an authentic patisserie in Sarajevo, the capital of Bosnia-Herzegovina, takes its customers on a journey through history in its atmosphere with photographs of Yugoslavian leader Josip Broz Tito decorating the walls and the Ottoman beverage, boza.

Famous for its boza, which was brought to the country in the Ottoman era, the patisserie has been serving in Sarajevo for 98 years.

The photographs of Tito and the Ottoman boza are the prominent elements of this historical venue. While one of them is a cuisine tradition, the other appears as a memorable political value.

Boza, which has been served to the customers since the venue was first opened, is the best-selling beverage in the patisserie, where people talk about the Yugoslavian leader.

Sahlep is another traditional beverage that is available along with a variety of desserts such as cakes and tulumba, a fried batter soaked in syrup.

Having become a popular place in Sarajevo, this patisserie is on the top of the list of places to visit.

A symbol of the city

Taking customers on a historical journey with its authentic furniture and old counter, the patisserie is one of the rare venues in Sarajevo, where customers can put the bill on the cuff.

İzeta Bajramovic, one of the partners of the patisserie, who has been working there for more than 50 years, said the patisserie was opened on the city's renowned Ferhadiye street and has been serving in its current location since 1950.

Bajramovic added that Sarajevo locals love boza and that boza sales are quite high.

Stating that most of Tito's photographs were gifted by customers, Bajramovic said, "We have a different customer profile. For example, veteran soldiers who fought in World War II come. It is one of the city's symbols."