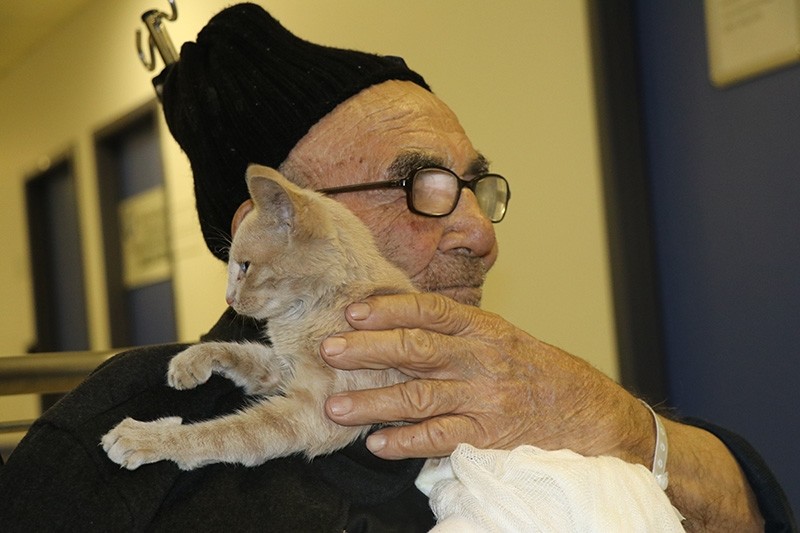 The dramatic image of 83-year-old Ali Meşe and his cat watching their home burn down in western Turkey's Bolu province drew international attention after it was shared on CNN International and the Ellen DeGeneres Show's official Instagram account.

While CNN shared a still image captured by Anadolu Agency, which received almost 100,000 likes, the popular U.S. comedy talk show Ellen posted a short video of the incident that happened in the Mudurnu district's Ordular village.

"Love is everything. When his house burned to the ground, he made sure to save his biggest treasure," the caption read.

Meanwhile, the Mudurnu Social Assistance and Solidarity Foundation started to build a new house for Meşe's family, who made it out of the burning house with minor burn injuries.

Presidential spokesman Ibrahim Kalın previously tweeted that he contacted the governorate of Bolu province where Meşe lives, who told him they would address the "needs of uncle Ali."

Meşe, who is currently receiving medical treatment for his minor injuries, said he felt grateful for all the offers of assistance both from Turkey and abroad. The 83-year-old man added that he has received hundreds of calls since the incident.

Meşe accidentally started the fire Tuesday while trying to light his heating stove with gasoline. His efforts went wrong, leading to an explosion in the living room, after which the single-story wooden house burned to the ground.

Neighbors who noticed the fire immediately informed the fire brigade, who were able to save the old man, his wife, son and cat just in time.

The shocked owner of the house was seen hugging his frightened cat called "Sarıkız" (Blond Girl), mourning the loss of the hens he was breeding in the basement.

"Thirteen of the 14 hens in the basement died during the fire," Meşe said.