Tombalak (roughly translates to "Fatty" in English) was adopted by the locals of Istanbul's Küçükçekmece and has been living a life of pleasure ever since. Tombalak is overjoyed by the food people have been giving to him - so much so that he weighs 18 kilograms, three times more than a cat should weigh.

At first glance, the obese cat looks more like a small bear than a cat, according to the locals. After becoming ill from food poisoning, the locals of Küçükçekmece rushed him to an animal hospital where Tombalak received treatment. 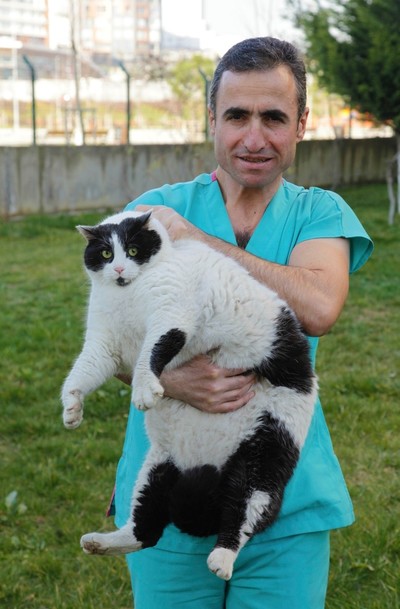 However, the hardest part of the journey for Tombalak is just about to start. The giant cat is beginning a diet under the supervision of a vet.

Veterinary practitioner Mikail Doğan claims that Tombalak managed to reach to a weight of 18 kilograms due to the unhealthy diet he has been given. The locals have been warned not to give more food than they should to Tombalak in order for him to lose weight. The locals are also trying to help Tombalak exercise by making him move around more than he usually does.

"The locals are trying everything in their power to help Tombalak lose weight. After getting food poisoning, Tombalak has not lost weight, but as I see it, everybody is doing what they can to help him. They will not bring as much food as they bring him every day, pushing him to live a healthier life. Currently, Tombalak weighs 18 kilograms but if the locals follow my advice, he will certainly begin to lose weight in no time," said Doğan.

Gülçin Yüksek Bulut, one of the locals who feeds Tombalak, said they are doing everything to make Tombalak healthy again.

"Our municipality gives us 15 kilograms of cat food every month so we feed Tombalak with it. We try to make him run but we fear something might happen to him as he was out of breath after five minutes. Tombalak can only run for sausages, his favorite food. But no more sausages for him. We warn others not to feed him as well."