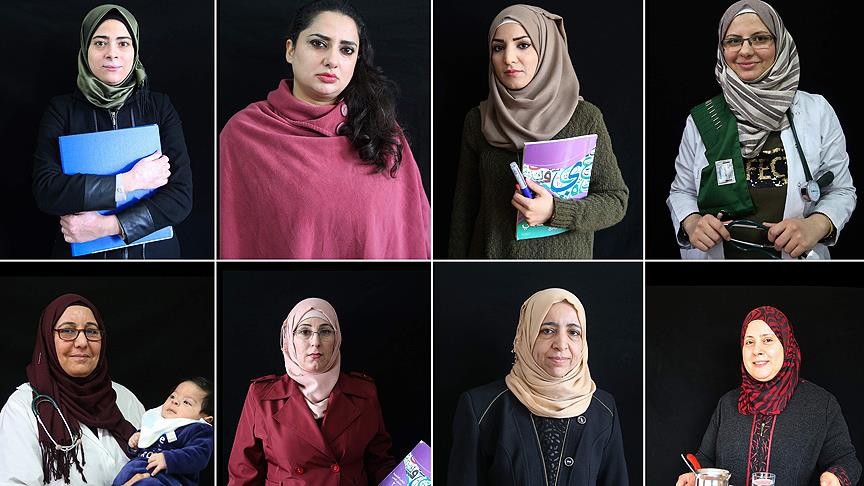 Eight Syrian women, most of whom experienced the pain of losing someone in the war, are happy to be able to do their jobs with the opportunities provided to them despite the emotional weight they bear.
by Anadolu Agency Mar 09, 2018 12:00 am

Syrian women, who have found opportunities to sustain their lives in Turkey where they are taking refuge from the war in their country, work in Şanlıurfa province, while holding out hope of someday returning to their country

The civil war in Syria, which has been continuing nearly for seven years, affects women and children the most. Many women, who had to run away and leave their homes and countries, sustain their lives elsewhere, particularly in the protection of Turkey's Şanlıurfa province.

Eight war-weary women, who work in Şanlıurfa, draw attention as victims of a common pain even if their stories are different. Syrian women, most of whom experienced the pain of losing someone in the war, are happy to be able to do their jobs with the opportunities provided to them despite all the pain.

Speaking to Anadolu Agency (AA), a few Syrian women shared their stories and what they faced and experienced in the war. 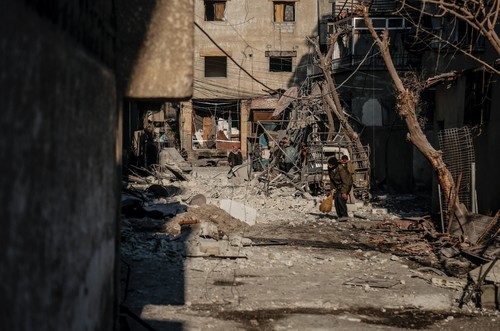 The seven years of the Syrian civil war have led to the deaths of thousands and forced the remaining population to flee their homeland.
​
Beraa al Khalil, 27, who is a legal adviser of a foundation serving Syrians in Şanlıurfa, implied that she graduated in 2012 and was only able to do her job for just a year.

She said that they took refuge in one of their relatives' houses in Şanlıurfa five years ago when shootings increased, the young lawyer expressed they were relaxed to some extent when they arrived in Turkey.

Khalil, explaining her happiness of helping Syrian citizens abroad, continued, "I have been a legal adviser in this foundation for a while. I am trying to help Syrians. Thank God, we are in better condition. My only dream was to become a lawyer as kid and to advocate the rights of people. However, there was no law left in Syria, and we couldn't do anything. I am very happy to be able to do my job here. There are many Syrian people in Şanlıurfa, and therefore, people can have some problems. To help them is surely a good feeling."

Stressing that all human rights were ignored in the war in Syria, and especially women and children went through great pains, Khalil said,

"The law was violated before the war. Even wars have laws, but everything was ignored in this war. People, without the exception of being civilians, women or children, are being tortured and it is happening under the whole world's eyes. There is almost no other country than Turkey objecting this lawlessness. When justice disappears, other things don't matter."

Yusra Abbush, 50, who is a general practitioner at Educational Center for Immigrants' Health, said that being a doctor is a sacred job, and she is very proud to do her job even if she isn't doing it in her homeland.

Remarking that they always pray for Turkey, which protected them during their hardship and provided opportunities, Abbush added, "I have been a doctor in al-Hasakah for nearly 17 years. When the cruelty after the conflicts got intolerable, we decided to take refuge in Turkey three years ago. I am continuing my life with my husband and children nowadays. May God bless Turkey and the Turkish government. They embraced us and provided opportunities for our jobs. I don't know how to thank them. We also try to help our citizens as much as we can do."

'for our children's future'

A housewife, Ensaaf Luay, also indicated that they came from Raqqa to Şanlıurfa four years ago and they are happy to see their children continuing school.

"My children were scared of the bombs. Something bad could happen at any time. Therefore, we couldn't stay there anymore. We came here thinking about our children's future. Thank God, they are continuing their education in Turkey. We had many difficulties, but we are trying to forget all of them with the help of Turkey."

Agricultural engineer Siyam el-Muhammad, 45, also came from Deir Ez-Zor to Turkey, running away from the cruelty of the terror organizations the People's Protection Units (YPG) and the PKK.

Siyam, who stays in in a tenement with her family, reported that she doesn't work but wants to continue her job as soon as possible.

Doctor Valladah Shams, 29, who is a pediatrician at the Educational Center for Immigrants' Health, said that she has been living in Turkey for three years.

"Thank God for Turkey. I have the opportunity to work in my dream job that I couldn't practice back in my own country. We try to help our citizens at the hospital, working together with my friends at the hospital."

'I enrolled in university'

Aman al-Salamah from Homs, who is a student at the Biology Department of Harran University, talked about how happy she was to continue her education.

"My family stays in the tent city and all their needs are satisfied. I attended Turkish courses firstly and later enrolled for university. I hope I can find a job in my country after graduation."

Bayda al Hassan from Aleppo, who is a teacher at the Said Geçici Educational Center, stated that she lost a lot of relatives in the war.

Noting that her children receive education at the same school, Hassan said that she is struggling to support both her children and other Syrian kids.

'We saw the chaos of war'

Architect Betul al-Saleh from Deir ez-Zor remarked that she wants to return to her home country even though she has no problems in Turkey.

She said that the place she lived in her country was occupied by terrorist organizations the YPG and PKK.

"I was an architect in Damascus before the war. When conflicts started, I went back to my family's house. We witnessed all the chaos of the war. We came here three years ago. I occasionally plan some projects but I don't have a fixed job. I hope, the war will end soon and we can rebuild our country."