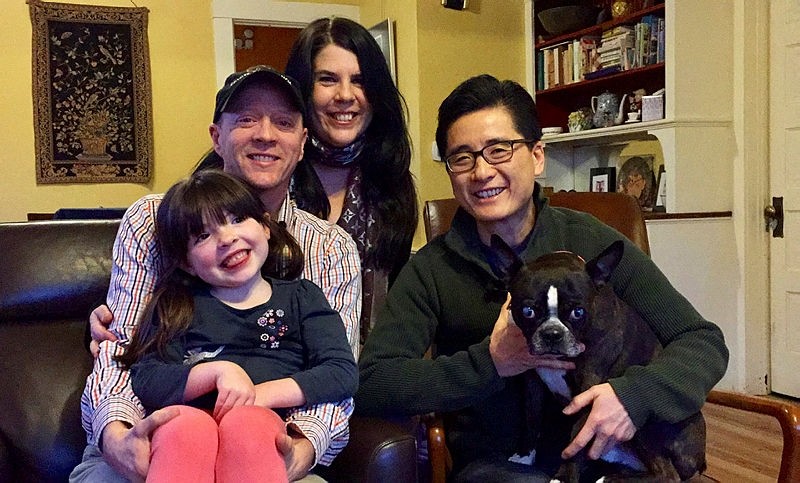 Yee Won Chong had just been diagnosed with cancer. His relatives were half a world away in Malaysia and couldn't care for him. So he turned to the friends he considers his "chosen family."

"There was no question," says his longtime housemate Brooks Nelson, a Portland, Oregon, charity executive who used his own sick days to accompany Chong to doctor's appointments. "That's what family does."

Arrangements like theirs have quietly been gaining political recognition.

In the last two years, Arizona, Rhode Island and the three biggest U.S. cities — New York, Los Angeles and Chicago — have passed laws that let workers use sick days to care for anyone who's like family to them. Similar laws also passed in Austin, Texas, just last month and St. Paul, Minnesota, in 2016. Millions of federal employees and contractors also have the benefit. To some business interests, such laws put bosses in the awkward position of figuring out who's the "equivalent" of family. But to Chong, the policies simply "catch up with the ways people are related to each other." At 46, the nonprofit-organization consultant has had romantic partners but also forged bonds with people in homes he has shared and in his circle of liberal activists.

Still, as he asked for help dealing with cancer, he wondered: "Am I imposing on them?" His friends didn't see it that way. Roberta Hunte readily kept Chong company at chemotherapy, recalling her friends' support when her mother had cancer. Andrei Joseph, who flew in to help Chong recuperate from surgery, is a cancer survivor and part of a couple whose home Chong shared for years in Brookline, Massachusetts.

"What kind of person would I be if I didn't go in his time of need?" says Joseph, a retired teacher. Acknowledging the "equivalent" of family relationships is rooted in a 1969 regulation about federal employees' leave for military funerals in the thick of the Vietnam War. A 1994 law extended the "equivalent" definition to federal workers' sick time, and a 2015 presidential order did the same for many federal contractors. The more recent state and local measures cover an estimated 10 million private-sector and government workers, says Wendy Chun-Hoon of Family Values at Work, a paid sick leave advocacy group.

Workers don't get extra sick days for family-"equivalent" care; it's just a way they can use their allotted time. It's not yet clear whether the broad definition spurs workers to take more of their sick days. Wil Darcangelo's chosen family is one he never envisioned when he moved into a studio at a Fitchburg, Massachusetts, home five years ago in exchange for carpentry work.

The household now includes him and his husband; a 22-year-old blind woman with autism they legally adopted last summer; his husband's stroke-stricken ex-partner; a British expat who helps aides care for the ex-partner and plays music with Darcangelo and his daughter; and the 72-year-old homeowner.

"Our system works for us, but only in spite of the way the larger system works," says Darcangelo, 48, a church spiritual coordinator whose flexible hours allow him to fill in care gaps.

Regardless of laws, some employers let employees use sick or "personal" days to care for whomever they choose. "I don't need to know or research or see a birth certificate, a wedding certificate. We're dealing with adults," says Jim Houser, co-owner of Hawthorne Auto Clinic in Portland. But some business groups and employment lawyers are wary of managing sick time around the "equivalent" of family.

"This open-ended provision, which defies any definition or parameters, is priceless" to sick-time slackers, says Michael Soltis, a Connecticut lawyer who tracks paid sick leave laws. Lisa Horn of the Society for Human Resource Management, a major association of HR professionals, says the language "raises a host of concerns" about its meaning. Others see better ways to be inclusive. "Who gets to decide who's the 'equivalent of family?'" asks Richard V. Reeves, a senior fellow in economics at the Brookings Institution think tank. He suggests simply letting workers use sick time to care for themselves or "another." However it's worded, the meaning of chosen family seems clear to Jana Clark, who is looking forward to seeing Rhode Island's law take effect in July.

After a stint in graduate school, Clark, who is 30 and starting a job at a university, returned to Providence last summer because of her chosen family there. The friends help one another in ways as big as opening homes when someone needs to stay, and as everyday as dropping off soup when someone's sick. "Just the same kinds of things," she says, "a family member might do."