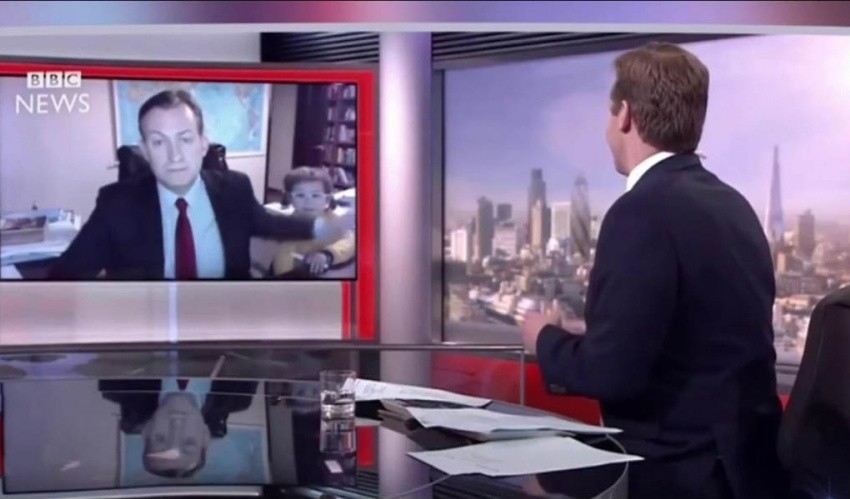 The Korea politics professor who became a viral sensation after his children interrupted a BBC interview says he has been pulled over by police for selfies and photographed buying milk in the year since the broadcast.

Robert Kelly of Pusan National University was commenting on the downfall of impeached President Park Geun-hye when his daughter Marion waltzed into his home office, followed by his toddler son James, who wheeled in on his baby walker.

Suddenly the implications of a parliamentary vote turned into what the BBC described as a "perfect piece of physical comedy."

Kelly's wife Kim Jung-A, who was watching on television from their living room, flew in seconds later, flinging her arms in a desperate attempt to retrieve the young intruders, before returning on all fours to reach out and close the door.

The clip spread like wildfire online and provoked widespread debate and commentary in media around the world.

It is the most-watched video ever on the BBC's YouTube page, with more than 27 million views — half as much again as the second-place item, drone footage of the Nazi concentration camp at Auschwitz in Poland.

A year after the broadcast, Kelly wrote on the website of the Lowy Institute, an Australian think tank, that the subsequent 12 months had "mostly been fun and sometimes weird."

"I was photographed buying milk at Costco once because apparently BBC Dad's calcium consumption is a hot issue," he said.

"A cop in South Korea once pulled me over to ask for a selfie."

The family had made some money as a result of their notoriety, "but the total amount was not that much."

The biggest upside he said was his opinions on North Korea and northeast Asian security were sought more often, and he was invited to more events — although at one panel in China he was introduced as "BBC Dad ... and, oh yeah, an expert on Korea."

As the fervor mounted in the days after the interview, Kelly expressed hope that one day he would be known for his work, adding, "I mean, this wouldn't be the first line in my obituary."

The U.S.-born academic, who studied at Ohio State University, teaches U.S. foreign policy at the institution where he is an associate professor and has research interests in international politics and political theory.

The politics surrounding the video were "weird," he added in his post, published on the anniversary of the interview Sunday.

Some racist neo-Nazis called him a "race traitor." "This was predictable. Anyone in an interracial relationship has experienced it," he said.

"More curious were the responses from the left which tried to read some kind of race-gender narrative into the video," he added, with his wife's attempts to stay out of shot by crawling along the floor seen as "some sort of metaphor for white-male social power in Asia."

"The episode was just a family blooper," Kelly insisted.

In South Korea, suggestions that his wife was the family nanny were seen as prejudiced at the time, with broadcaster SBS referring to "Caucasian-centered racism."

Kelly denied the two most frequent claims about the video — that it was staged so that they could become famous, and that he did not get up because he was not wearing trousers.

"We anticipate that this is our final major public statement on the video," he added, hoping that after a year, "peak interest in it has passed, making way for the next dancing cat video."