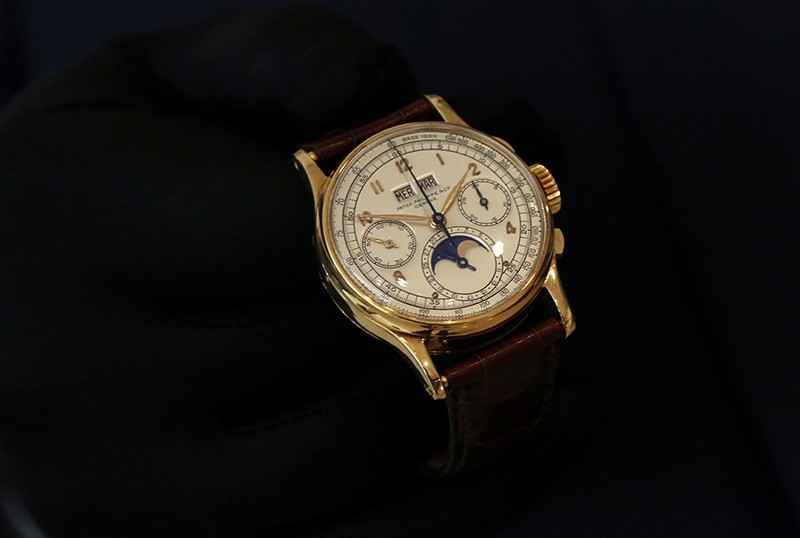 The Patek Philippe 18k gold perpetual chronograph wrist watch with moon phases belonging to the King Farouk is on display at the Christie's auction in Dubai, United Arab Emirates, March 19, 2018 (Reuters Photo)
by reuters Mar 19, 2018 12:00 am

Made in 1944 and embossed with old Egyptian royal crest, the Patek Philippe 1518 with perpetual calendar and chronograph is said to be one of only 281 such models ever made by the prestigious Swiss watchmaker.

The watch is the cover lot for the auction on Friday, with the value of the sale expected to be announced on Saturday.

King Farouk, Egypt's last king before a 1952 revolution overthrew the monarchy, was a collector of rare watches, a hobby inherited from his father, King Fuad. He owned Patek Philippe and Vacheron Constantin watches and also collected cars and coins.

"Reference 1518 by itself is a watch that at the time only the elite, the nobility and the most important clients of Patek Philippe would afford," said Remy Julia, head of watches in the Middle East, India and Africa division at Christie's in Dubai.

"Why? Because of the price and because it was done in extremely small quantity. Remember that in those days having a watch itself was a luxury. So how about having a gold watch by the best maker, complicated, with perpetual calendar and chronograph," he told Reuters on the sidelines of a press event to showcase auction items.

The 1518 series was the first by any watch manufacturer to combine perpetual calendar and chronograph.