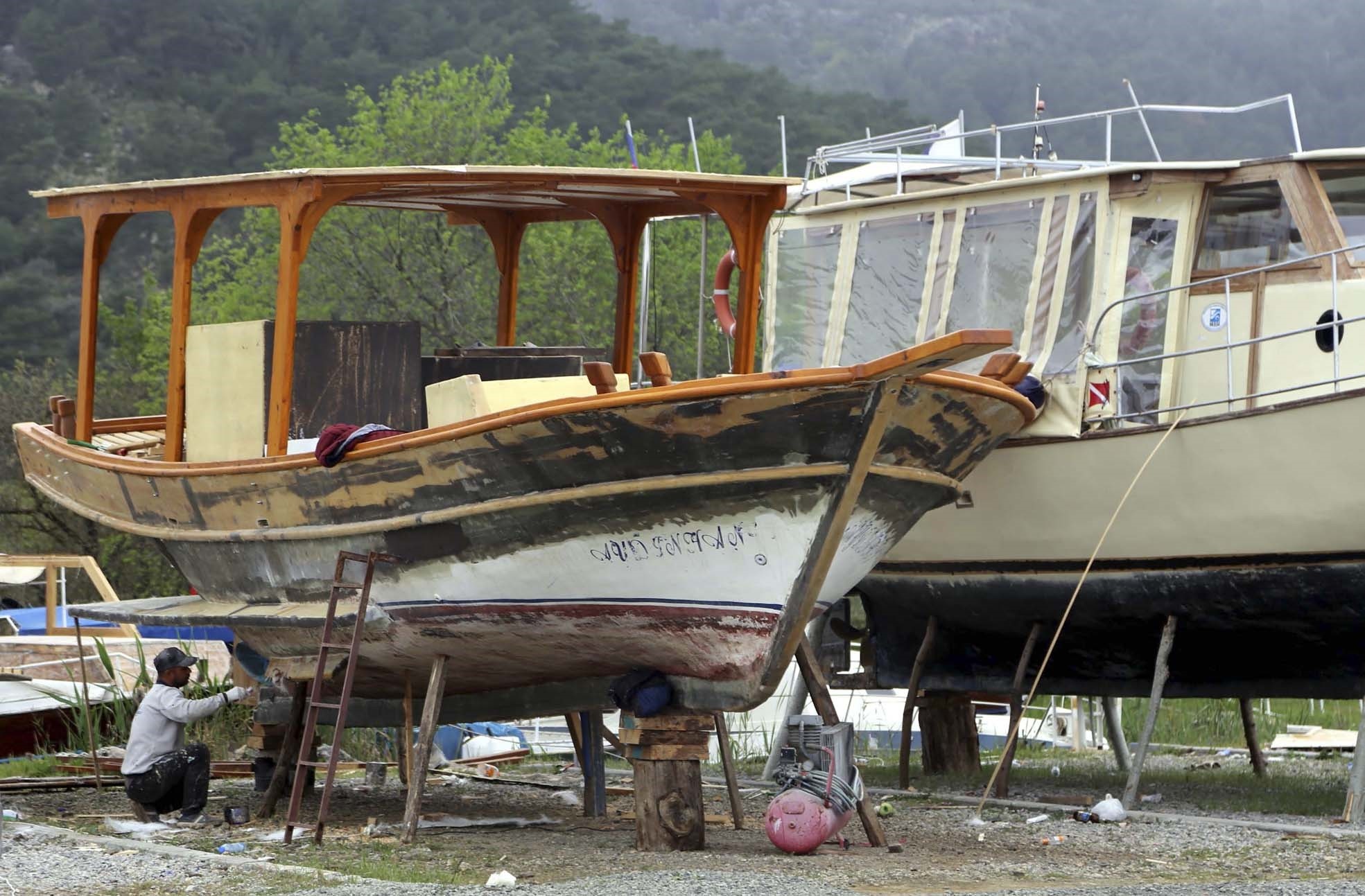 Tour boats on the Dalyan Canal are put under meticulous maintenance at the local boat yard.
by Anadolu Agency Apr 02, 2018 12:00 am

Boats that carry thousands of tourists every year are on the water once again in Muğla, which is among the most important centers for sea tourism, after some much needed maintenance. English magazine The Times registered the Dalyan neighborhood in Ortaca district as the "Best Open Space of Europe" in 2008 with its İztuzu Beach, rock graves, the ancient city of Kaunos, Dalyan Canal and mud baths.

The famous tour boats on the Dalyan Canal underwent some meticulous maintenance at the local boat yard. After a lot of effort, the boats were finally launched back into the Dalyan Canal, after being hauled by tractors. The 21-kilometer Dalyan Canal is a natural waterway that connects the lake and sea. Boat tours from İztuzu beach in Köyceğiz Village to the sea are major tourist attractions in the region.

The king graves on the hill by the canal also draw in tourists who are interested in historical works and geographical richness. The region, which is a wetland with its biological diversity and a bird heaven, is unique because it is a breeding site for Caretta Carettas. Dalyan and the mud baths around it also appeal to health tourism.

Dalyan Private Catered Boat Corporation President Mahmut Kıydan told Anadolu Agency (AA) that they try to prepare boats ideally to serve visitors in 2018 tourism season in the best way possible. Noting that boats serve to those who stay in Dalyan, Kıydan continued, "We organize day-long, dining tours. We have 28 boats in our corporation, and they are above and beyond the standards in Dalyan." He said that most of the boats are ready are to start tours in the first week of April. "We hope this season will be better than what everyone expects. Our aim is to host our guests in the best way and make them visit Dalyan again," he added.

Özay Akdoğan, who has been dealing with tourism management for 30 years in Dalyan, said that nearly 500 boats serve on the Dalyan Canal. Akdoğan said that they ground their boats before the season to repair them.

He explained that the motors and propellers on the boats are checked and repaired along with their external parts. "We practice all the new things about motors inside our boats in order not to harm the environment. If there is not a lot of damage, the maintenance of a boat costs between three or four thousand Turkish liras." Akdoğan said nearly a million local and foreign tourists visit Dalyan every year and most of them tour with boats on the canal. He said that they are hopeful with the new tourism season.

Derya Bilen, who is a boat captain in the Bodrum district, also invited visitors to Muğla. Adem Aslan, who has a boat in Dalyan, said, "We will launch our boat after painting it. A lot of boats have already been launched. We will join them and serve the people. We are satisfied with the tourism of the region. We are waiting for everyone to join us in Dalyan."

Hamit Güçlü, who deals with the manufacturing of craft, remarked that all the boats will be launched on Apr. 1. Mehmet Güngör, who makes caulking for boats, added that they are preparing for the new season.