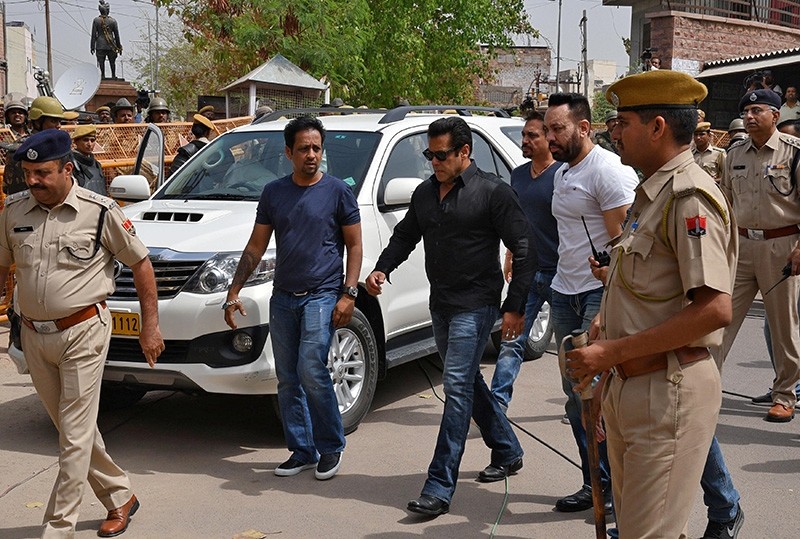 Bollywood star Salman Khan was convicted Thursday of poaching rare deer in a wildlife preserve two decades ago and could face up to six years in prison.

The busy actor contends he did not shoot the two blackbuck deer in the western India preserve in 1998 and was acquitted in related cases.

Prosecution lawyer Mahipal Bishnoi told reporters outside the court in the Rajasthan city of Jodhpur: "The court has given a five-year jail term and fined Salman Khan 10,000 rupees ($150)."

The lawyer said an arrest warrant was being prepared for the 52-year-old actor who would be sent to Jodhpur central jail. Khan, who pleaded not guilty, can still appeal.

Four other stars also accused in the case — Saif Ali Khan, Sonali Bendre, Tabu and Neelam — were acquitted. They were in the jeep that Salman Khan was believed to be driving during the hunt. Tabu and Neelam both use just one name.

Chief Judicial Magistrate Dev Kumar Khatri was hearing arguments from attorneys on Thursday to decide the sentence for Khan.

He had been sentenced to jail terms of one and five years in related cases before being acquitted by appeals courts for lack of evidence.

The blackbuck is an endangered species protected under the Indian Wildlife Act.

Khan has had other brushes with the law.

In 2014, the Mumbai High Court acquitted him in a drunken-driving, hit-and-run case.

The judges found that prosecutors had failed to prove charges of culpable homicide, in which they accused Khan of driving while intoxicated in 2002 and running over five men sleeping on a sidewalk, killing one of them.

The government of Maharashtra state, of which Mumbai is the capital, has challenged his acquittal in the Supreme Court.