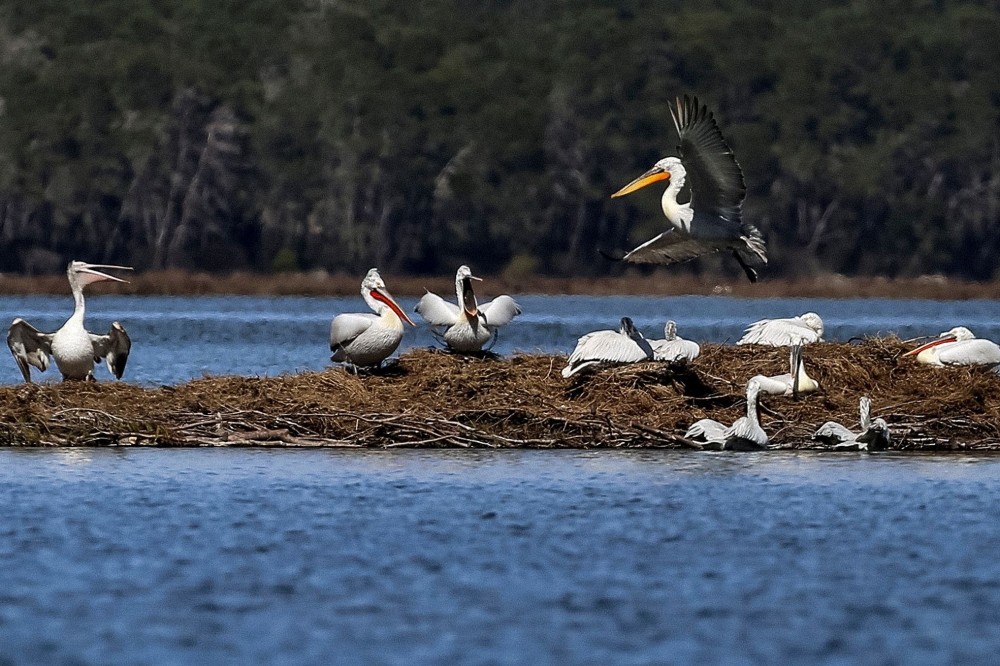 With feathers on its head that make it look like it is wearing a wig, it does not go unnoticed: The Dalmatian pelican is back with a flourish in the Divjaka Lagoon in western Albania.

The expansive site is one of the most important wetlands in the Adriatic basin, key for migratory wildlife and as a breeding area for the large elegant pelican.

But like other spots in Europe, the picturesque lagoon has suffered extensive damage at the hands of man and the Dalmatian pelican came close to deserting it.

Now a return in force of the bird, whose wingspan reaches up to three meters (10 feet), is down to a proactive policy by Albanian authorities, often criticized for being passive on environmental issues.

"The king has returned this winter," said Fatos Jolla happily, a 67-year-old fisherman on the lagoon.

Since the 1980s, Europe's bird population has declined by several tens of millions, according to ornithologists.

The International Union for Conservation of Nature (IUCN) has included the Dalmatian pelican (Pelecanus crispus) on its red list, as it believes that 80 percent of its breeding sites in Europe have disappeared.

At the Divjaka Lagoon, the pelicans had almost completely abandoned their nests, although previously "the Divjaka-Karavasta National Park was considered its kingdom," said its head, Adrian Koci."From 250 breeding pairs in the 1960s, we arrived at 17 in 2000-200, adding, "We returned to 52 pairs and 57 births in 2017," he told AFP.

A small island of 22 square kilometers (8 square miles), in the middle of the lagoon, has been crucial to helping lure back the birds.

The nesting sites were raised so as not to be threatened by the rising water, barbed wire has been placed to prevent tourist access, and hunting was banned in 2016.

A pelican was shot in mid-February, but the hunters were identified and face two to four years in prison.

The recovery is fragile and saw a setback recently, Koci said."The trend was promising until February. But bad weather, snow and wind disturbed the colony."Some pelicans have even abandoned their nests and eggs," said Koci, who hopes to see the birds return in April.

However, further determined steps are needed to ensure the long-term nesting of the birds at the lagoon, he said.

Channels must be created between the lagoon and the sea, "which has not been done for 20 years, to allow the circulation of fresh water and oxygen ... and the entry of fish," the basis of the pelicans' diet, Koci added.

Nighttime fishermen, who are depleting the fish stock with their nets and electric lamps, should also be tracked down and banned, he suggested.

Noting that 70 percent of the Balkan country's wetlands have already been destroyed, ornithologists and environmental activists wrote to Prime Minister Edi Rama asking him to veto the project.It was suspended, but the activists fear that the halt may only be temporary.

"It would mean the disappearance of the Dalmatian pelican and other species that make the diversity of this park," warned Koci.

He estimated that nearly half of the 200 species of birds inhabiting the lagoon could be affected.

But their presence, noted for the first time four years ago, may only be good news on the surface.It could be down to global warming, which could in time prove fatal for the lagoon's ecosystem if urgent measures are not taken, Nasi lamented.