In wartime Yemen, artisans keep up the shine on gemstones 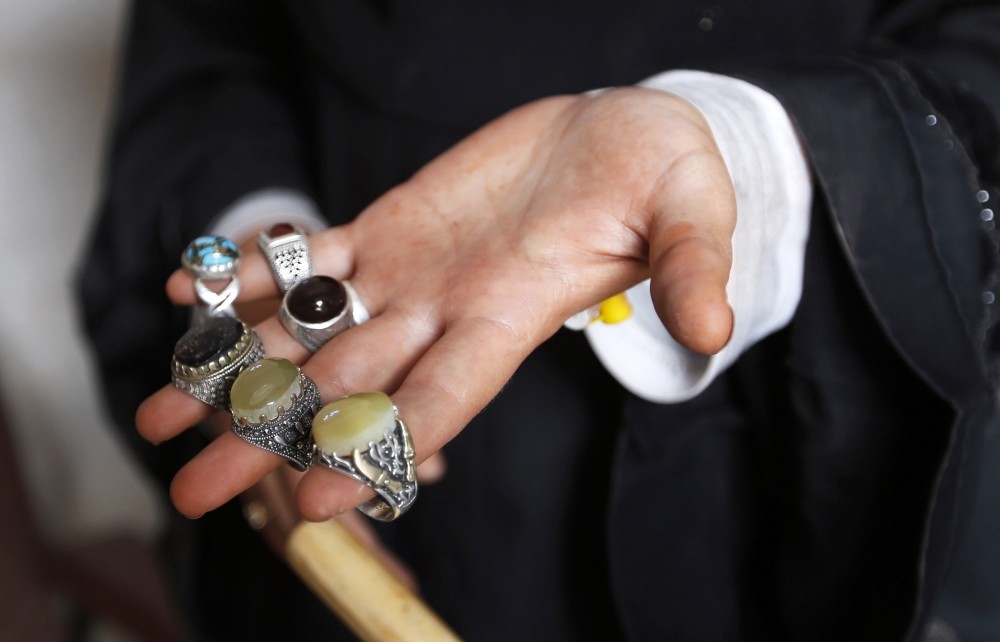 Due to the ongoing war in Yemen just a quarter of artisans are still working in Sanaau2019s old market, where the majority of gemstones were sold, and the men who previously dominated the industry have mostly gone in search of other work.
by May 18, 2018 12:00 am

A female artisan in wartorn Yemen, which is currently going through a humanitarian crisis, Safaa al-Faqih tries to earn a living through her handcraft with gems

Her fingers bleed from beneath the nail beds, but sitting at her workstation, filing Yemeni gemstones on a spinning wheel, Safaa al-Faqih is at peace in a country too long at war.

In green canvas trainers and a black niqab, the young artisan - one of the few Yemeni women in her field - runs a blue Yemeni agate through a hot flame, turning it slowly with her bare hands as she fits it into a mold.

"Every day, these stones tell me a different story," Faqih told Agence France-Presse (AFP). "I discover something new every day."

While the stone is still hot, she gathers her long black abaya and moves to a grinding wheel, where she runs her finger over the deep blue edges every second to feel for their smoothness. 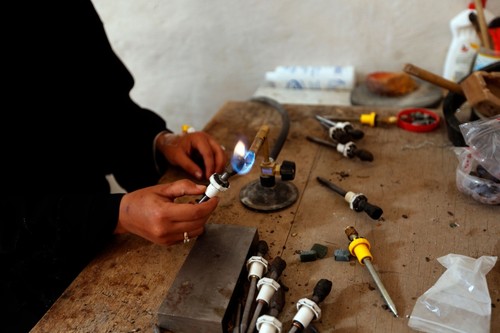 Safa al-Faqih, one of the few female Yemeni craftsmen working in the precious stones industry in Yemen, crafts a stone in the old city of the capital, Sanaa.

The stone slowly morphs from an uneven sphere to a perfectly symmetrical emerald-cut agate that gleams in the light.

"I love this craft," the young, brown-eyed artisan said. "Sometimes my fingers are all cut, and sometimes I get sick.

"But I love sitting among precious stones. I love the stones themselves. It's a true passion for me."

That passion is part of a long love story between Yemen and precious stones. What is today modern Yemen was once home to the legendary Queen of Sheba, and it was there that she found her famed jewels and gold, which she later gifted to King Solomon in Jerusalem.

Thousands of years later, war threatens to erase that history.

Yemen's rich cultural scene is slowly being eroded by a brutal war, with the historic town of Zabid, the old city of Sanaa and the old walled city of Shibam, known as the "Manhattan of the Desert," now on UNESCO's World Heritage in Danger list.

Yemeni agate - or "aqeeq" in the local dialect - is a trademark of the traditional silver jewelry the country is famed for, adorning rings, necklaces, women's bracelets and, for men, curved daggers worn tucked into a belt.

The traditional Yemeni men's dagger, or jambiyya, has for decades been embellished with locally-quarried agate.

The stone carries particular significance among Muslim communities, as the Prophet Mohammed is said to have worn a silver ring bearing the stone, which is hard, chemical-resistant and takes on different shades around the world.

Yemen also has a tradition of jewelry-making that dates back hundreds - some historians even say thousands - of years, joining both the country's Muslim communities and the minority Jewish population, known for their craftsmanship.

Until the war brought the country's rich crafts industry to a halt, Sanaa in particular was famed for its silversmiths and embroidery artisans creating Yemen's trademark shawls.

In 2015, the country's northern Huthi rebels - who today control the capital, Sanaa, unchallenged - drove the government of Abedrabbo Mansour Hadi south, prompting the intervention of a regional military coalition led by Saudi Arabia.

Just a quarter of artisans are still working in Sanaa's old market, where the majority of gemstones were sold, and the men who previously dominated the industry have mostly gone in search of other work.

Faqih has lost most of her clients, who are unable to afford gemstones in wartime, and now sells her wares to a few family members or neighbors.

Love of the craft

It is in Sanaa that Faqih first learned her craft and where she continues to practice, creating pieces to meet whatever demand is left.

The artisan credits her father for encouraging her to fight for a place in her field.

In 2011, Faqih and a few of her peers pushed for women to be allowed into the male-dominated government vocational school. They succeeded, and joined the graduating class of that year.

"There was some opposition, from men especially, that I do this job. My parents were supportive, though," she said.

"I went on because I love this. I love this craft. That's the truth."

The Yemen war has claimed nearly 10,000 lives since Saudi Arabia and its allies joined the government's war against the Iran-backed Huthis.

The conflict has triggered what the United Nations says is the world's largest humanitarian crisis.

Millions are trapped in a country at the brink of famine, as ports remain blockaded and the country's main international airport is largely shut down.