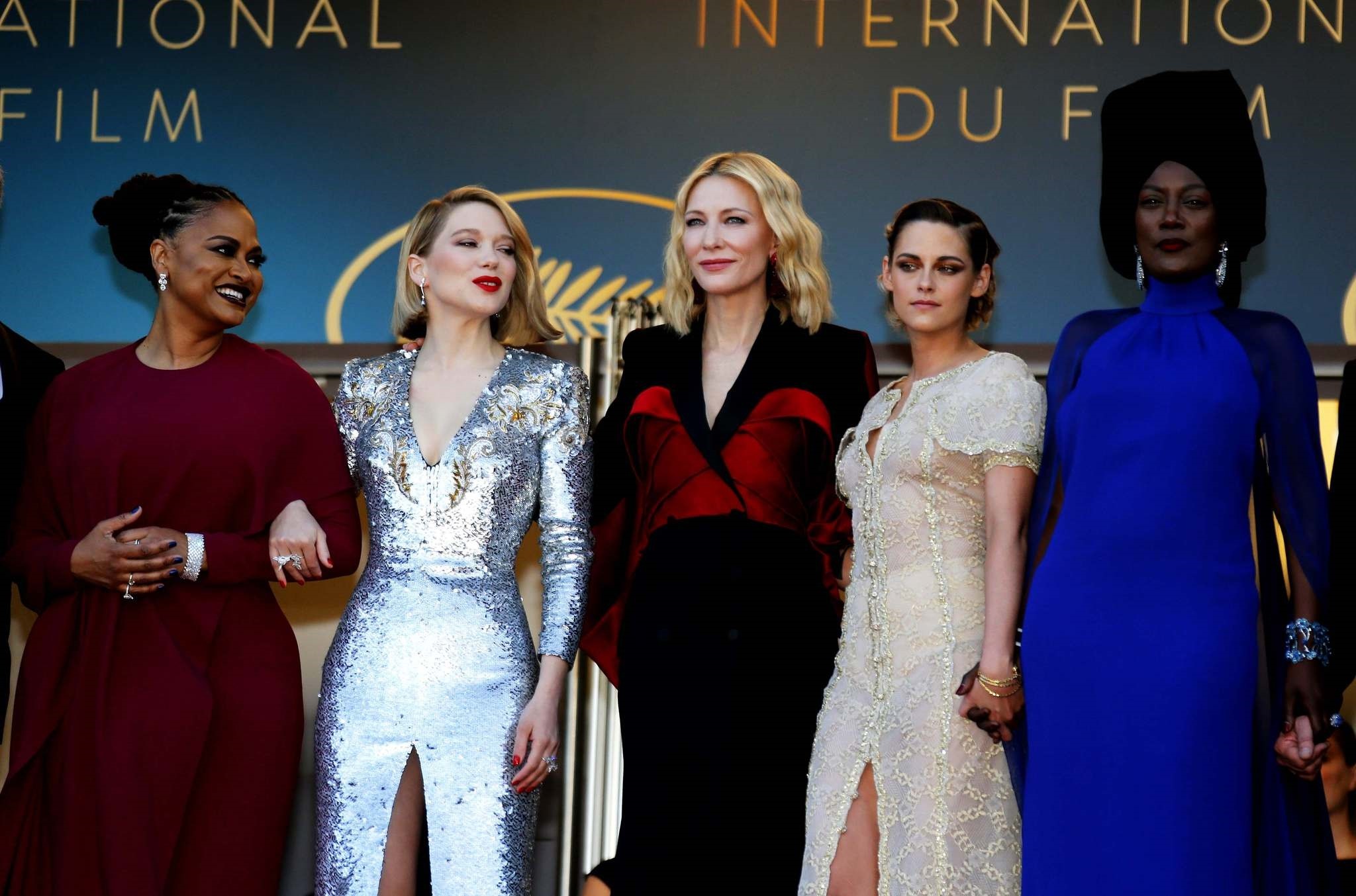 With two powerful protests by female stars calling for equal pay and treatment, the red carpet at the Cannes film festival - which ends Sunday - was about much more than fashion statements.

But that did not dim the glamour of the gala premieres. We look back on 12 days and nights of glitz, as well as the occasional wardrobe malfunction, on the French Riviera.

Who's wearing the trousers?

The Cannes red carpet has seen a lot in 71 years. But few nights will live longer in the memory than the one when female stars led by jury president Cate Blanchett protested about the festival's epic fail when it comes to women directors. All but 82 films of the near 1,700 shown at Cannes over the years have been by men.

This was also possibly the best-dressed demo in history, with Kristen Stewart rocking a white Chanel trouser suit and many others following #MeToo protests elsewhere by dressing in black. This was a Cannes where women wore the trousers - once frowned upon by the festival's dress code - with Blanchett killing it with a black Givenchy jumpsuit for the premiere of "Capernaum."

No one does regal better than Blanchett who made her name playing British monarch Elizabeth I. Her intelligence and poise gave the festival a new sheen, from her speech at the protest to her insistence that the jury will chose the best film, not the one that best fits the political narrative.

Her wardrobe choices were equally impeccable at more than a dozen galas. Two black Armani numbers contrasted with an intricate avant-garde Iris van Herpen dress. And she brought the house down with a spectacular blue Mary Katrantzou ball gown that took six months to make. The dress also delivered the cutest photo of the festival when her daughter hid under her skirts as she left her hotel room.

Black and mixed-race French actresses showed how to be angry and elegant in their protest on the red carpet about the shocking discrimination and stereotyping they have suffered. Dressed in Balmain they lit up Cannes on the wettest night of the festival and were clapped up the carpet by jury member Khadja Nin.

The Burundian singer has given Blanchett a run for her money with some seriously sassy wax print dresses and headwraps while Spike Lee dusted down his Love and Hate knuckleduster rings from "Do the Right Thing" for his "BlacKkKlansman" premiere.

After "Heelgate" in 2015 when women were stopped on the red carpet for not wearing high heels, Cannes "sexist" dress code, since revised, took a bit of a kicking this year with jury member Kristen Stewart throwing off her stilettos and walking barefoot up the steps for "BlacKkKlansman."

A few nights later she ground convention further into the dust with an androgynous black Chanel jacket and leather trousers and loafers. Italian director Alice Rohrwacher, whose quirky "Happy as Lazzaro" is in the running for the Palme d'Or top prize, took gender reversal to a new level by wearing a man's shirt backwards for her press conference.

Indian icon Aishwarya Rai and Iranian actress Marziyeh Rezaei wore two of the most photographed dresses - for very different reasons. The train of the Bollywood's star's peacock/butterfly Michael Cinco dress was the longest seen on the red carpet for many a year, while Rezaei's was a spectacularly modest shimmering tulle number channeling the most gothic of fairytales.

And you have to feel sorry for the super chic Japanese actress Erika Karata who had to be rescued not once but twice by her co-stars from "Asako 1 & 2" when she got her heel stuck in her dress on the famous Cannes red carpet.