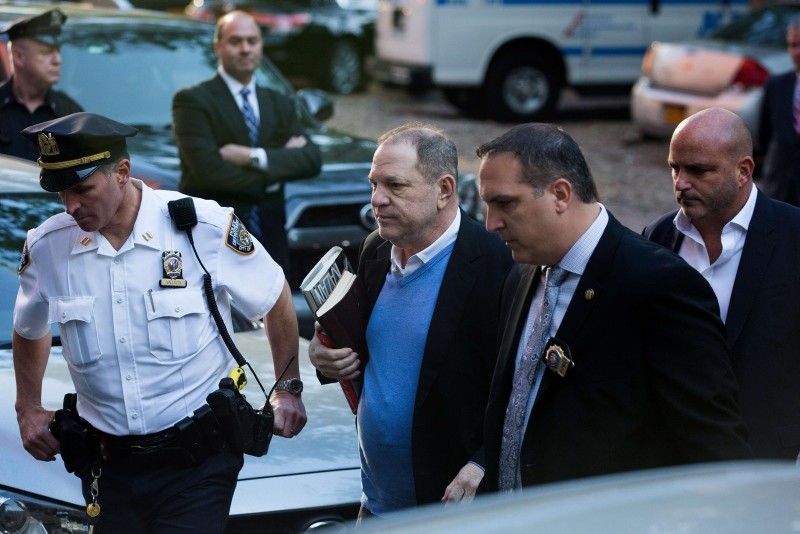 Harvey Weinstein turns himself in to the New York Police Department's First Precinct after be served with criminal charges by the Manhattan District Attorney's office on May 25, 2018 in New York City. (AFP Photo)
by Compiled from Wire Services
May 24, 2018 12:00 am

Former Hollywood producer Harvey Weinstein arrived at a New York City police station on Friday to turn himself in on charges related to sexual misconduct.

He is due to be charged by the Manhattan District Attorney's office, according to the New York Times quoting two unidentified law enforcement officials. The newspaper said he faces charges of raping one woman and forcing another to perform oral sex on him.

Weinstein was facing charges in connection to at least one accuser, Lucia Evans, who reported that the fallen power broker forced her to perform oral sex on him in 2004, the New York Daily News reported.

The allegations against him include rape, sexual abuse, assault and harassment. In some cases, Weinstein allegedly offered to pay the women or coerced them to stay silent.

After his arrest, Weinstein is expected to be arraigned and then given the option to be released in exchange for bail, which is expected to be set at 1 million dollars, U.S. media reported. He is also likely to be fitted with a monitoring device and asked to surrender his passport.

According to legal documents filed earlier this year, knowledge of his behavior was so widespread that employees at The Weinstein Company were tasked with preparing a room for Weinstein's sexual encounters, cleaning it up afterwards and returning items of clothing to women who had left them behind.

More than 100 women have since accused the 66-year-old of impropriety going back 40 years and ranging from sexual harassment to assault and rape.

The twice-married father of five has been investigated by British and U.S. police but has not yet been charged with any crime. He denies having non-consensual sex and has reportedly been in treatment for sex addiction.