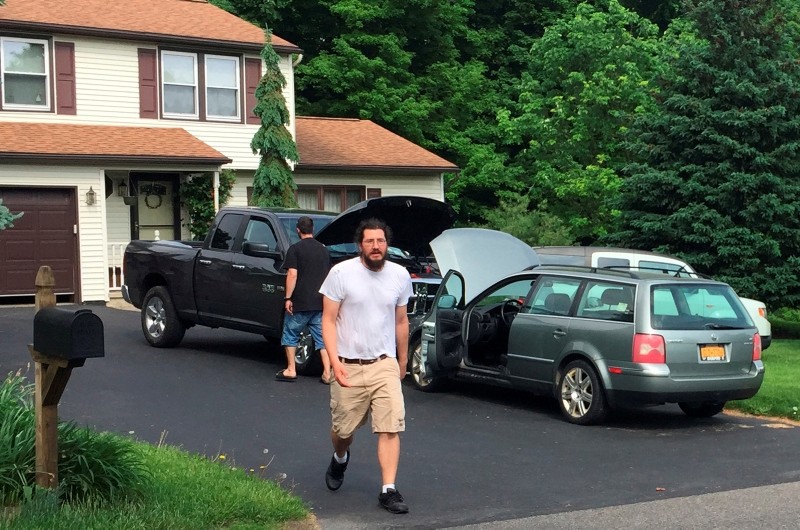 Michael Rotondo honked and waved to reporters as he pulled out of the driveway of his parents' split-level ranch in Camillus, New York, 2 ½ hours before the noon deadline set by a judge last week.

He said his parents had said goodbye, "more or less," and got his rumbling station wagon running after some false starts, according to the Post-Standard of Syracuse.

Rotondo had avoided TV crews staked out on the upstate New York road earlier Friday morning by leaving from the back, but returned around 9:30 a.m. in the passenger seat of a pickup truck. He loaded a cooler and garbage bags full of items into the truck then dealt with the station wagon, which has a broken coolant system, according to the newspaper.

"I gotta get going before that thing blows up," he said.

Mark and Christina Rotondo brought the court case against their son after several eviction letters offering money and other help were ignored. They offered him $1,100 "so you can find a place to stay" and nudged him to get a job.

"There are jobs available even for those with a poor work history like you," one letter they sent him reads. "Get one — you have to work!"

A May 22 court appearance drew national attention. Rotondo refused the judge's request to work things out directly with his parents, who sat quietly nearby. He failed to persuade the judge to grant him another six months with his parents.

Rotondo planned to spend the next week at an Airbnb in Syracuse. He credited Jones, who has asserted that the Sandy Hook Elementary School massacre was a hoax, with providing a $3,000 check to cover rental and other costs. Later, he plans on moving in with a distant cousin, the newspaper reported.

Rotondo has said the eviction fight is connected with his efforts to get back visitation time with his 8-year-old son. He lost custody and unsupervised visitation with the boy in 2017.

He said he called the police because he believed the boy's Legos were in the basement and his father wouldn't let him look for them. Instead, the father offered to look for specific items and, if he found them, bring them out. The Legos were found after police arrived.

"This isn't a game show," Rotondo said, explaining to the newspaper why he called police. "I don't have to guess what's behind Door No. 1."

Calls made to Mark and Christina Rotondo's home on Friday were not answered.