Dinosaur skeleton may fetch up to $2.1M at Paris auction 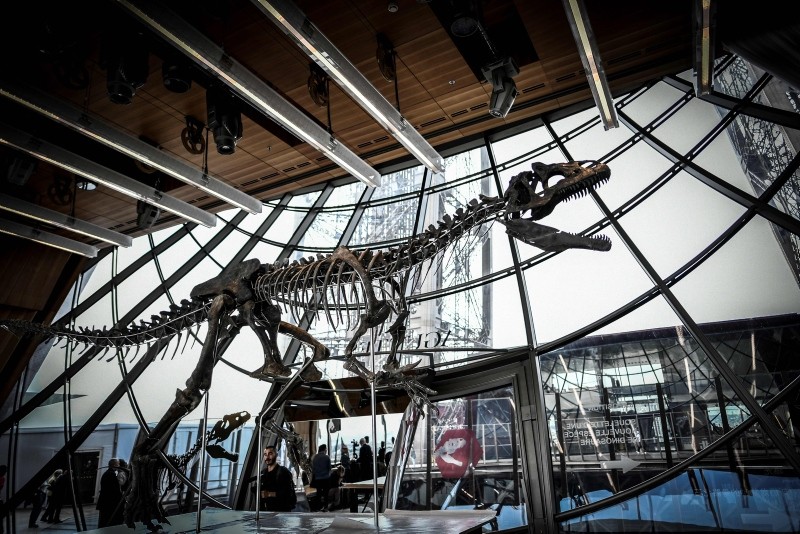 A picture taken on June 2, 2018 shows a skeleton of an undeterminate carnivorous dinosaur on display at the first floor of the Eiffel Tower in Paris (AFP Photo)
by Jun 04, 2018 12:00 am

The Eiffel Tower in Paris is due to play host to an unusual event Monday - the sale by auction of a dinosaur skeleton.

Auctioneers Aguttes are quoting a guide price of 1.2 to 1.8 million euros (1.4 to $2.1 million) for the 8.7-metre-long theropod, which was mounted on display on the first floor of the tower.

It was dug out of the Morrison Formation, a rich geological source of dinosaur fossils in the U.S. state of Wyoming, between 2013 and 2015.

Aguttes' valuation expert for the sale, Eric Mickeler, says the skeleton appeared to be an unknown species from the allosaurus genus, or perhaps a completely new genus.

The creature would have been "a ferocious carnivore," Mickeler told dpa.

"This one is unusual in that it lived for a long time, that is, we can tell from its bones that it died at an old age," he added.

"It had accidents along the way, it had fractures that healed... but it didn't die from them," Mickeler said.

The skeleton dates from 152 to 157 million years ago, toward the end of the Jurassic period.

It is 70-percent composed of original fossilized bones, with resin replacements completing the display.

In December, Aguttes sold what it said was the largest mammoth skeleton in private hands, for 548,250 euros.

It was bought by the head of a waterproofing materials firm that has a mammoth as its logo.