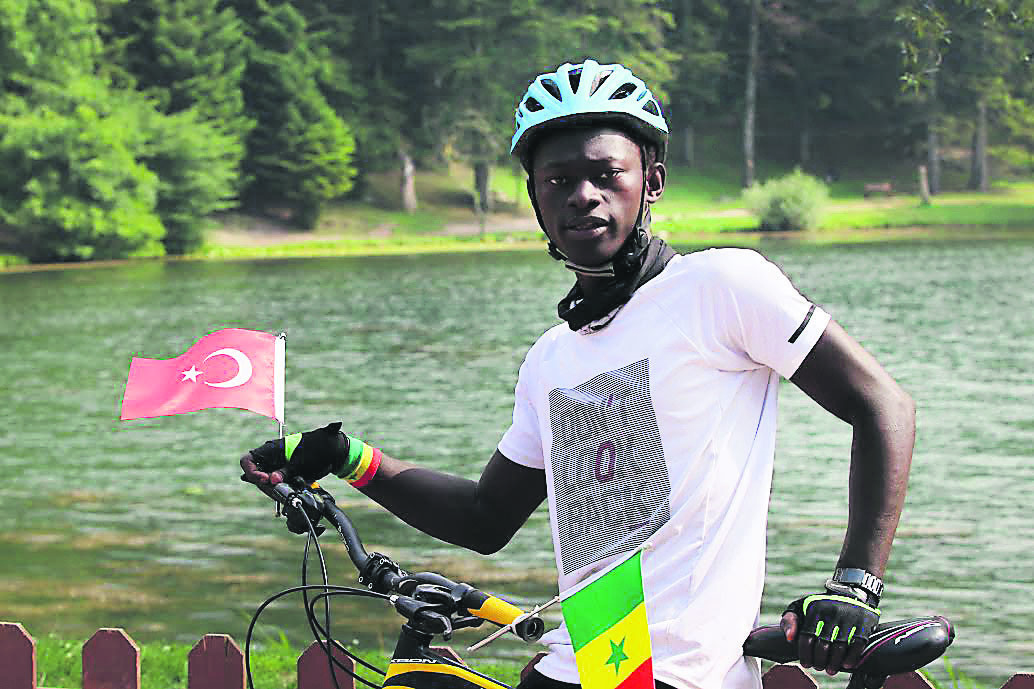 Mustafa Ndiaye, a Senegalese student in Turkey, has embarked on a tour of the country to change the image of Africa in the minds of Turkish people.

During his cross-country tour, he will be riding a bike that was gifted by the residents of Orhantepe, Istanbul, where Ndiaye lives. The Senegalese student is planning to tour all four corners of the country on his bike, named "Kusti."

Ndiaye, however, started his journey two years ago but he was mostly hitchhiking. "I was a little anxious before starting this hitchhike tour. But I met many people along the way and decided to continue my journey using a bike," he said. He also shares the photos of his journey with fellow Africans.

He continues to pursue his education in Turkey and explore the country in his free time. Ndiaye has already visited Kocaeli, Sakarya and Düzce before traveling to Bolu recently.

When he shared the idea of touring Turkey on a bicycle with her family, they were a little bit anxious but supported him by saying: "You can manage it. Our prayers are with you."

He said that he generally sets out early in the morning. On my way, I am often stopped by curious people and thus I am moving slowly.

"Let's say I can travel to another city in two or three hours but in most cases, I'll reach there in the evening because people stop me everywhere out of curiosity, some talk to me – some even offer tea or food."

Ndiaye said he has never faced a bad situation on the road. "I've been hosted by people at their homes and some brought him food when he set up my tent," he said.

"I have no money since I started my journey from Istanbul. I have some friends in some cities. I stay in their homes or dormitories. Sometimes, I set up my tent. When I am in my tent, people always bring me food. I was even not that full in my home," he said.

He added that people are always sincere and he has become friends with some of them during this journey. "The elders did not see me differently from their children. They have hosted me and fed me.

They even put some food in my bag. Some of them asked me to visit them on my way back. However, I will be using a different route. Therefore, I told them I can visit you next year."

'I want to change the image of Africa'

Ndiaye said that his biggest aim in this journey is to change people's perception of Africa. "I ask people what they know about Africa and I share my own experiences. I always mention Africa while talking to other people. This is my first aim."

His second aim is to build a bridge between Turkey and African culture. He wants to send the photos of Turkish people to his African brothers and sisters.

'Turkish people are my sponsor'

Reminding that he set out on a bike that was gifted to him by neighbors, Ndiaye said: "I can say that I have no official sponsor. However, Turkish people have become my sponsors. In my neighborhood, there are many people from different places. When they heard about my project, they bought me this bike."

Ndiaye also shared some interesting experiences about his journey on his social media accounts. "I want both Turks and Africans to see that there are good people," he said. Thanking the people of Turkey, he said: "They hosted me and my friends for seven years. We did not feel that we were in a foreign country. Turkey is like a home."

He said the journey to Bolu was difficult and added that "Bolu is different from all other places that I visited. It is a hilly area. All my energy was used up here. It is a beautiful city but it was really hard to cycle here."

He is planning to visit the Mediterranean and Aegean regions after other cities, including Kastamonu, Samsun, Mardin and Şanlıurfa. When he finishes the tour, which will continue for three months, he will return to Istanbul again to attend school.