Message of peace through language of colors 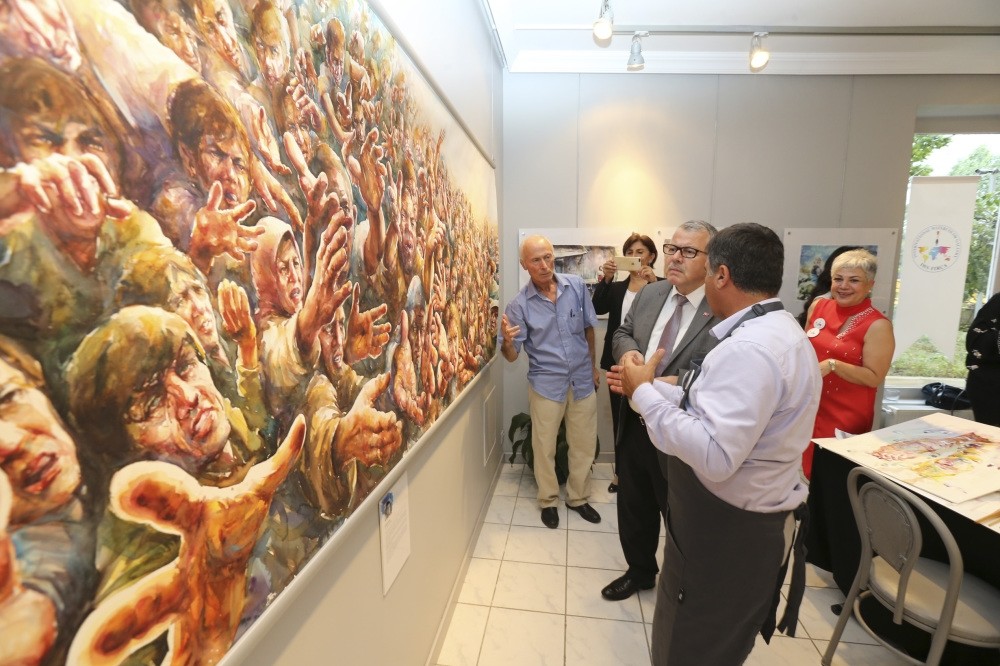 A painting exhibition titled "Turkey and Myanmar Gather with Peace and Love" has opened in Ankara with the support of the Turkish Cooperation and Coordination Agency (TİKA).

Turkish painter Atanur Doğan's "Refugees" will be among the works displayed at the exhibition which will be attended by three artists from each country.

Speaking at the opening ceremony of the exhibition, Atanur Doğan said that the peaceful side of art and artists who produce beauty, are very significant to help and support those who live in difficult conditions around the world. "We are giving a message of love and peace to the world with the language of colors along with our friends from Myanmar, without any limits like race, language, religion; despite not speaking the same language," said Doğan.

Doğan emphasized that it was important timing for such an event since it was coinciding with the 60th anniversary of the foundation of the diplomatic ties between Turkey and Myanmar. He said that Turkey's Ambassador to Myanmar Kerem Divanlıoğlu took the first step and initiated the project.

TİKA Vice President, professor Birol Çetin, said that as TİKA, they carry out nearly 2,000 projects in 150 countries especially in education, health and human-oriented projects each year. He stated that they try to give place to art in their projects as much as possible and they support theater and organize workshops and meetings with painters.

"Our philosophy is to share as much as possible; we believe that problems can be solved in this way. Unfortunately, many problems in the world are often being solved with arms. As Turkey, we want friendships to increase and peace to always be on the agenda. That is why we continue to share, and with this effort, we came first in the world in terms of humanitarian aid in 2017," stated Çetin.

"As TİKA, we have been given convenience to work in Myanmar. We actually wish there wouldn't be something that TİKA had to do." Çetin stressed that the event was going to be very beneficial and the power of art should be noted here as contributing to peace.

Painters Atanur Aydoğan, Cüneyt Şenyavaş and Gamze Kılıçare partook in the exhibition from Turkey while Min Wae Aung, Myint Naing and Htoi San Pan participated from Myanmar. The exhibition, which is hosted by IWC Fırça Art Gallery, opened on July 18 and can be visited until tomorrow.

Apart from the artists, there were many art lovers along TİKA's Myanmar Coordinator Nilüfer Kamer, who attended the opening ceremony of the exhibition.

Right after that, Emine Erdoğan with a delegation visited the Rohingya people, who took refuge in Bangladesh following which Turkey sped up its aid efforts in the region.

Through TİKA, Turkey continues to provide aid in many areas from health to food for hundreds of thousands of Rohingya Muslims who escaped the violent attacks in Myanmar and sought refuge in Bangladesh. TİKA, which supports Rohingya Muslims in many areas including through infrastructure in Myanmar, continues its activities in the region for the permanent peace and tranquility by using the unifying effect of art.