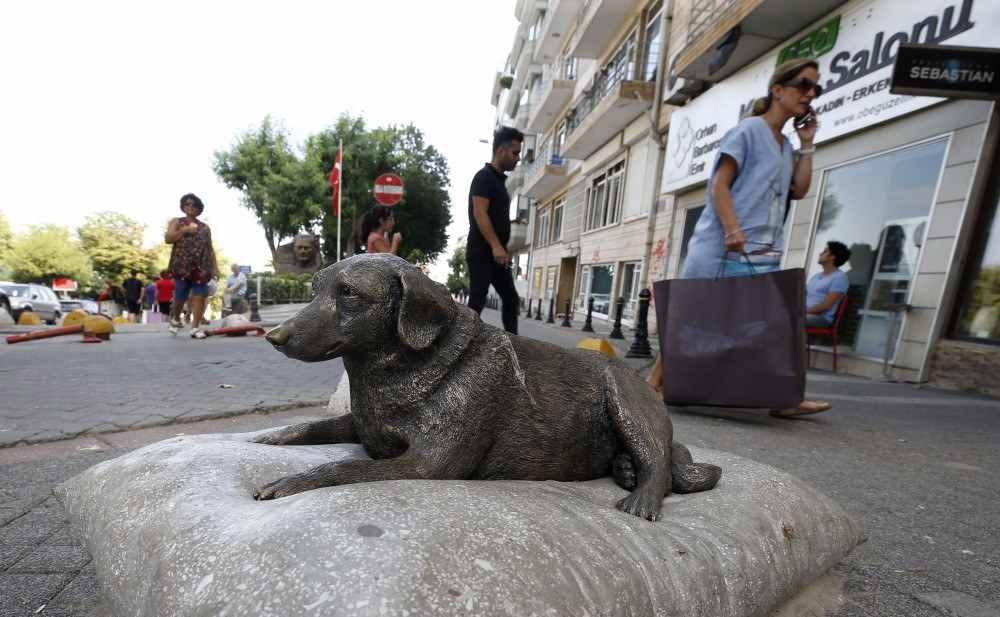 The city-dwellers in Istanbul never forget their stray dog friends, with whom they share the city with and often feed. They sculpt the statues of these animals, as they are the symbols of the streets on which they have lived for so many years.

One of the symbols of Kadıköy and Moda, is the dog Tarçın (meaning Cinnamon in Turkish) who was named after the color of his hair. Even though many people hosted him in their homes, Tarçın chose to live on streets. Tarçın, who the residents of Moda were used to see every day, lost his life at the age of 18 after being crushed by a car reversing.

Sculptor İskender Giray from Moda sculpted a statue of Tarçın at the place where he would always wait for his human friends, on the Cape of Moda. The pedestal of the statue is a concrete cushion. The statue of Tarçın, which is a symbol of Moda, continues to salute the residents of the district. The stray dog Tommy who was fed by people in Fenerbahçe was known to be a close friend of stray cats. Tommy also lost his life after a car accident. Sculptor Ümit Öztürk sculpted a statue of Tommy and placed it at the stray animals' feeding point in Dalyan. Öztürk remembered to add two cats to this statue in memory of Tommy's friendship with stray cats.

Raki, who continues to live in Istanbul Aydın University's Florya Campus, is a stray dog who had the chance to see his own statue.

When the building of the university was used as a bank branch before being changed into an educational institution, Raki protecting the building. After the building was turned into Istanbul Aydın University, it continued his duty and took over the area.

The veteran of the university, Raki has been at the university since 2003 when the construction of the campus started. It is estimated that Raki was two years old at that time. With the request of Mustafa Aydın, the Chairman of the Board of Trustees at Istanbul Aydın University, a statue of Raki was erected at the campus in 2013. While Raki is touring the campus among the buildings, its statue also watches the students here. Continuing his rounds around campus for 15 years, Raki remains a loyal friend to the students, academicians and personnel at the university, although he is described as having a bit of an attitude and only listens to Hamza Sever, a security member at the university, and follows his instructions.