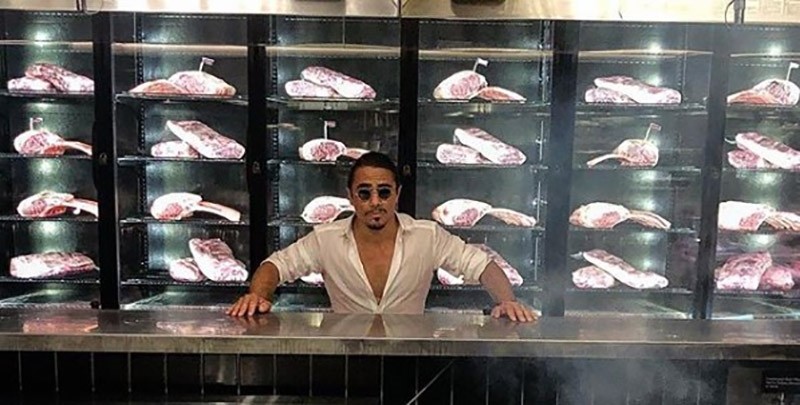 Turkish chef Nusret Gökçe, better known as "Salt Bae," has been chosen as one of New York's "hottest bachelors" by the New York Post.

The New York Post said that Gökçe is "too hot for the kitchen," adding that the 35-year-old claims to be married to his job.

"Who else can claim to sling around pricey steaks like a pirate with a bottle of rum, sprinkling salt with such a balletic flourish it's earned him 14 million Instagram followers?" the article said.

Gökçe, already an Instagram star in Turkey, went viral internationally in 2016 thanks to his videos of chopping meat and seasoning in perhaps the most "sensual" way possible.

Nusr-Et, Gökçe's high-end restaurant brand name, also gained popularity last year, although the first one was opened in Istanbul in 2010.

After gaining a strong brand image, Nusr-Et has expanded, opening restaurants in Miami and Manhattan alongside outlets in Dubai, Abu Dhabi and Doha.

Gökçe previously announced that he will be establishing a burger chain in Los Angeles at more affordable prices with his new business partner Israeli real estate magnate Rotem Rosen.

His restaurants have become a celebrity hotspot with regular visitors like David Beckham, Leonardo DiCaprio, Sean Combs and Mesut Özil.