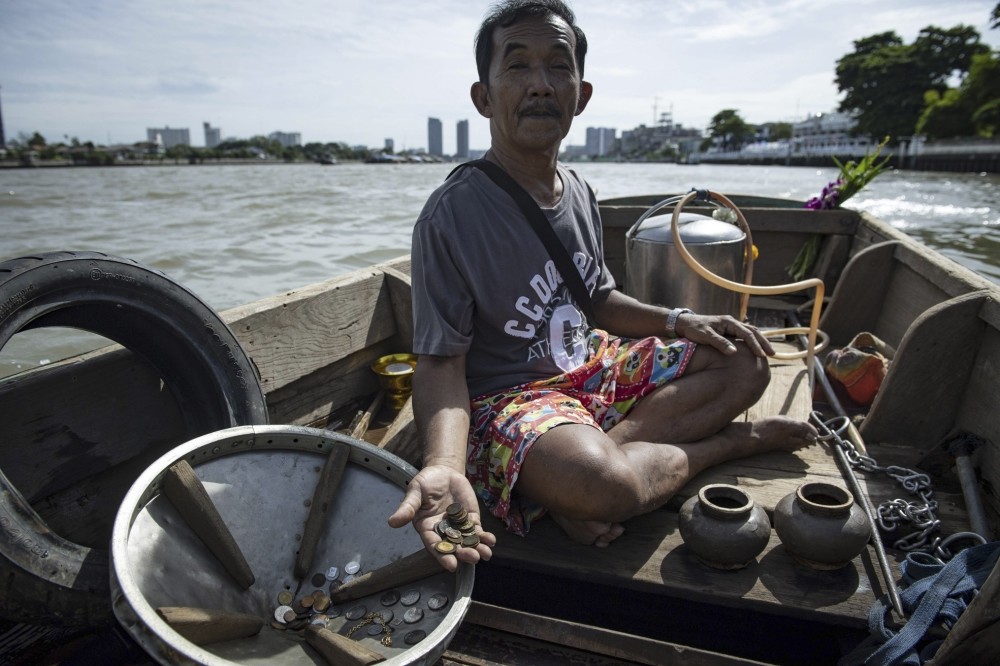 Bhoomin Samang holding rare coins he found during previous diving trips to the bottom of the Bangkok's Chao Phraya river.
by Aug 02, 2018 12:00 am

Kneeling before his homemade metal scuba helmet, Bhoomin Samang prays for good fortune before he dives into the day's work - scouring the bed of Bangkok's Chao Phraya river for sunken treasure.

The 62-year-old is part of a small community known as Thailand's "Indiana Jones" divers, who brave the inky-black underworld of the trash-filled waterway in search of coins, china, jewelry and scrap metal.

"We look for old coins, sometimes we are hired to find lost objects in the river," says Bhoomin, a veteran diver who has been scouring the river for 30 years.

Sometimes the find is more macabre - the divers have stumbled across skulls and skeletons as they feel their way along the river bed in total darkness.

"If you're afraid of ghosts, you can't go in because you can't see anything. But we're used to it," he explains.

Trained foreign and Thai Navy SEAL divers were recently at the center of global attention for their daring rescue of 12 boys and their coach from a waterlogged cave in northern Thailand.

But the "Indiana Jones" divers use more makeshift equipment and operate under the radar in the middle of the country's urban metropolis.

Wearing shorts and T-shirt, Bhoomin jumps off his motorized skiff into a river strewn with city sewage and debris.

He is able to breathe thanks to the boxy helmet that weighs around 20 kilos (45 pounds), and is hooked up to a rubber tube that connects to an air tank aboard the boat.

The tank pumps oxygen into the helmet to keep water out, allowing the most experienced divers to drop down to 30 meters (100 feet) below the surface.

After 15 minutes underwater, Bhoomin resurfaces with a cotton bag stuffed with mud.

He pans it out on a metal dish, revealing several 200-year-old copper and bullet coins with pictures of 19th century Thai kings Rama IV and V on them - artifacts divers call "regulars."

The coins trace the history of the Thai capital's lively waterfront, whose traditional stilted homes are increasingly being knocked down for development.

"In the old days, we lived on rafts and had floating markets. Villagers lost their jewelry and money in the river," he said.

An unfinished small Buddhist amulet was also hidden inside the mud.

The divers can turn a decent profit. Selling a few copper coins can make them some 500 baht ($15) - nearly twice Thailand's daily minimum wage.

If lucky, a piece of jewelry or a rare coin in good condition can be sold for up to $300 at Bangkok's antique markets, while their loot is fattened out by scrap metal.

But the divers' fate is in limbo as urban development threatens their riverside community, which stands on weathered wooden stilts.

Bangkok officials have ordered the families to relocate away from the river as part of the junta government's gentrification plan for the city.

The divers fear that without direct access to the river, up to "90 percent" of them will lose their livelihoods.

But that's not their only tension with the law - taking artifacts is technically prohibited and can be punished with fines or jail time.

Bhoomin, however, defends the trade, saying divers only go for the small stuff.

"We don't take big artifacts like Buddha statues... [if officials really want something] they can go down there and take it," says Bhoomin, who dips into a box of salvaged spectacles and sunglasses whenever he needs them.

Then again, the lure of something special is always just around the river bend.

"We don't know what we will find or where we will go today, said 29-year-old Somsak Ongsaard, another diver. "It's exciting."