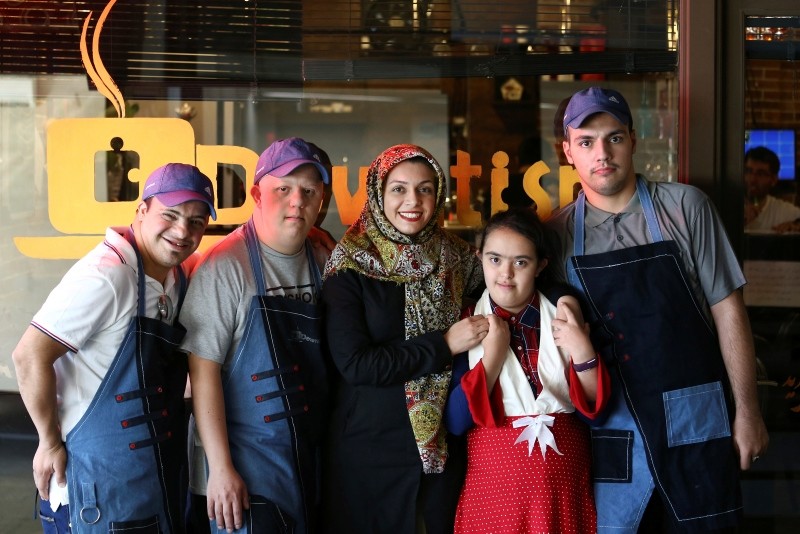 Melika Aghaei's fingers move slowly across the keys of the digital piano as she softly sings a children's song to the delight of the cafe's customers, while Mehdi Khakian takes orders for espressos and lattes.

Located near the bustling Vanak Square in north Tehran, the "Downtism Cafe" stands out from other coffee shops in the affluent neighborhood for its unique staff. All have either Down syndrome, like Aghaei, or autism, like Khakian, and run the entire operation themselves.

Opened only three months ago, the cafe — whose name combines "Down" with "autism" — is bustling.

"All of the people are kind and affectionate toward us," says Khakian, 31. "I invite everyone to come to our café and support us. I promise that we will give them very clean and perfect service when they come."

With the restoration of American sanctions that had been suspended under the 2015 nuclear deal, and unemployment at 12.5 percent, jobs are hard to come by in Iran. It's especially difficult for those with disabilities.

But the cafe not only provides work for those with Down syndrome and autism, it also shows how capable they can be, said Aylin Agahi, a 36-year-old musician who came up with the idea.

"The goal I had in mind by opening this cafe was to give these guys a role in society," said Agahi, who has taught music to people with disabilities for 17 years and led several concerts with her students around Iran. "I wanted the people to become familiar with them — many people do not have enough knowledge of Down syndrome; here they get to meet them face-to-face."

From her initial idea in 2016, she was able to open the cafe on May 1 with the help of 10 of her students' families and some funding from Iran's State Welfare Organization.

Agahi arranged for a month of training with a professional barista, and the cafe started out with 10 staffers. Three months later, it has 40 workers, mostly teenagers and adults in their 20s, who work short, three-hour shifts.

They earn minimum wage, and split tips equally at the end of the month. 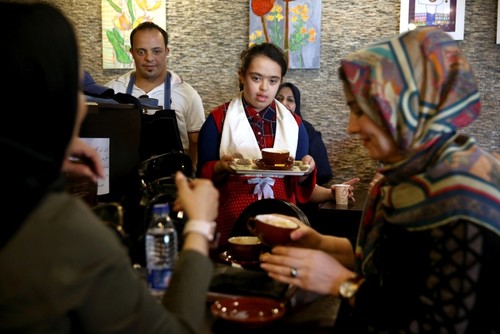 Unlike many dimly-lit cafes, the entrance and walls are covered with bright colors, framed paintings by the staff and balloons. The menu is currently limited to coffee, traditional beverages and cakes but they are seeking to expand to offer snacks and meals.

At 14, Aghaei is the youngest staff member.

"I work in this cafe as a server," the soft-spoken high school student said. "I play the piano too."

"I am really pleased to be here and see that people with extraordinary conditions are being given the opportunity to work," said the 28-year-old, who works for a pharmaceutical company. "They are doing their best to prove themselves and show that they are capable of many things if given the chance."

Even in the short time, working at the cafe has done wonders for Aghaei's self-esteem, her mother, Pari Zamani, said.

"To me, it is more than just a job for my daughter, it means more self-confidence for her," said Zamani, a high school physics teacher. "Many children with Down syndrome are pushed into isolation for various reasons and are unable to make friends, but here everyone's in the same situation."

Aylin said other families of younger staffers have also noticed huge changes, with them now eager to get out and go to work instead of preferring to stay at home.

"Sometimes parents of these kids send me photos late at night showing them having neatly prepared their shoes and work uniforms to go to the cafe the following day," she said. "When they are told that it is not their shift, they insist on going anyway and say they just love to be here no matter what."