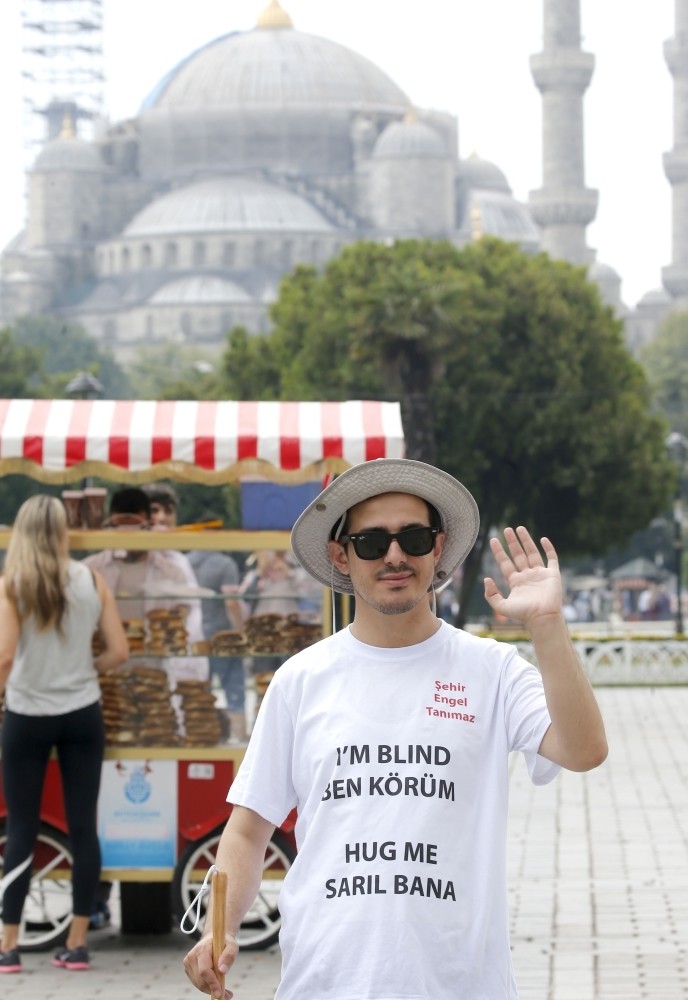 Turkey's first visually impaired YouTuber, Yunus Emre Polat, who uploads videos to show how a disabled citizen can integrate into the society, is currently conducting a social experiment in Istanbul.

To raise awareness on the problems of the visually impaired as well as to change the society's perspective of disabled citizens, the 27-year-old YouTuber is carrying out the social experiments in Istanbul's Taksim, Sultanahmet and a number of other locations.

Polat lost 90 percent of his eyesight at the age of 15 after his optic tracts were infected. He had a hard time adjusting to his new life. But once he did, Polat continued his educations and even traveled to 28 counties around the world as part of different projects funded by the European Union (EU) and Erasmus. To help others, who are experiencing the same difficulties in their social lives, Polat opened a YouTube channel with one of his friends who help him shoot the videos.While conducting his experiment, Polat stands with his stick wearing sunglasses and a t-shirt featuring the sentence "I am blind, hug me" both in Turkish and English to attract the attention of tourists and Istanbulites.

While some people are very eager to hug Polat and have a conversation with him, some were more hesitant to go next to him.

Stating that his primary aim is to raise awareness about people with disabilities, Polat also shared his experiences while conducting the experiments.

"A Russian lady came to me while I was in Hagia Sophia and hugged me tightly. I also hugged and chatted with an Arab tourist. Somebody from the U.K. came and shook my hand and we had a little chat about what I was doing. People have been very curious about my YouTube channel and how the idea for this social experiment came to my mind. It is an extraordinary thing to hug someone you do not know and talk about things," said Polat.

However, this is not the only social experiment Polat has done.

Polat and his team won encouragement award at the first YouTube contest held in Turkey. He is already aiming for the big prize at the next year's competition.

"The important thing is that a visually impaired person can achieve things. Other disabled people should also find their passion and never give up."

Polat said he will continue various social experiments around Istanbul and share related videos on his YouTube channel.