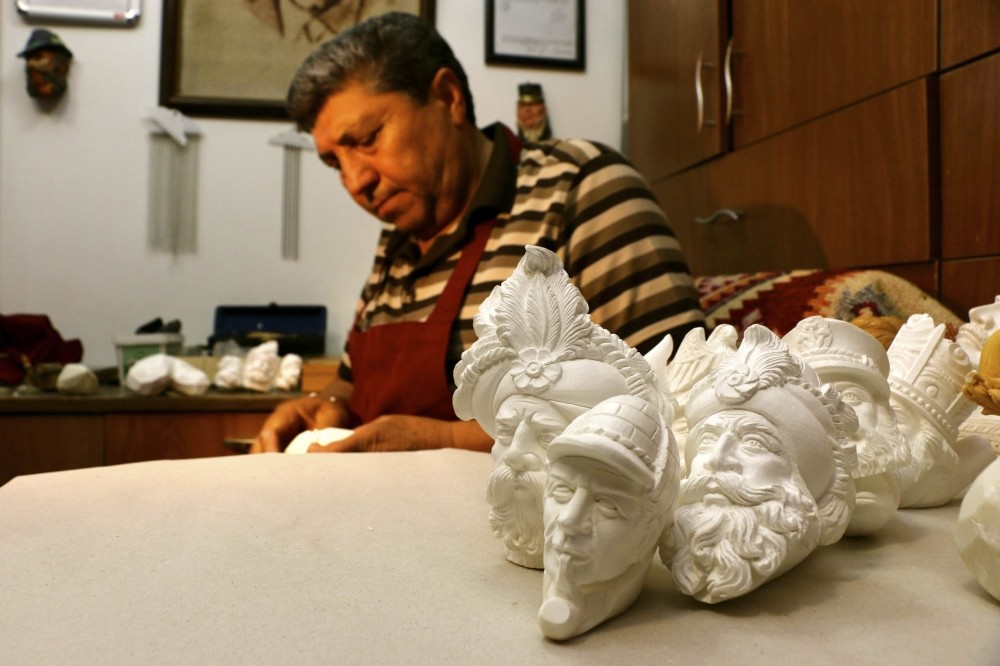 Sepiolite, which is a soft white clay mineral, can be turned into many different products and is one of the most famous souvenir one can get from Eskiu015fehir.
by Anadolu Agency Aug 28, 2018 12:00 am

Craftsmen in Eskişehir province, where the finest quality sepiolite beds can be found, shape ‘white gold' by using their imagination

Sepiolite is known to be found in Greece, the Czech Republic, France, Spain and Morocco and Turkey.

Turkey's Eskişehir province bears the highest quality of sepiolite along with the craftsmen who know how to shape it perfectly.

From pipes to beads, from chess boards to busts and knickknacks, sepiolite, which is a soft white clay mineral, can be turned into many different products and is one of the most famous souvenir one can get from Eskişehir.

Sepiolite taken from quarries is cleaned to remove foreign substances and mud by using short hatchets, after that it is removed from other stones surrounding it with hammers by quarry workers to reveal the shape and size of the sepiolite stone.

After this stage, the sepiolite is sold to craftsmen who process it in Eskişehir. Craftsmen who clean recesses and bulges, which are not suitable for production of the stone, shape the stone with a very thin and sharp knife to create a new product.

The craftsmen who shape sepiolite by turning them into souvenirs are dwindling in number, with only under 50 of them remaining, compared to the 1990s when there were around 1,000 craftsmen. Complaining of not being able to train apprentices, craftsmen continue to do their work with the enthusiasm they had when they first started this profession.

T​​​he Chairman of Eskişehir Sepiolite Crafts Association, Ramazan Bağlan, who works at the Odunpazarı Municipality Handicraft Bazaar (Atlıhan) spoke to Anadolu Agency (AA). He said that he started working in this profession at the age of 13 after finishing elementary school.

He also worked at the quarries where sepiolite is obtained. The 55-year-old craftsmen said, "I then learned how to process the stone. You need training, like college training, for three years at least in order to process sepiolite. It is not possible to learn this profession in less than three years. We call it 'white gold' but it has not found its value yet. It is like an antique that increases in value over time. It takes an hour to make a pipe. We also make different products. It takes weeks and even months to create some products. The biggest problem of our profession is not having apprentices. Art schools need to train sepiolite masters. Our doors are open to young people who want to learn this craft. We want to teach them as much as we can. This profession is almost forgotten. It really makes me sad."

'THE SECRET IS IMAGINATION AND PAINTING TALENT'

59-year-old Süleyman Çoşkun has been living in Eskişehir and processing sepiolite for the last 44 years. He said that he had to go through various stages to become a craftsmen in sepiolite processing, which he has been doing since 1974.

Çoşkun said even if people are talented, they still cannot become masters in a year, "A person has to be trained for at least three to four years under a sepiolite master in order to become a master. They need to learn knife techniques. Those who are interested in painting are usually successful in this profession. They can create different things by going out of classical models. I even created a William Shakespeare bust. A master picks up the stone and processes it according to what they see. Imagination is very important in this business. You can create a picture. The secrets of sepiolite processing mastership is imagination and painting ability." Ramazan Bağlan and Süleyman Coşkun are among some of the masters who give shape to the stone and reveal their artistic skills through it.