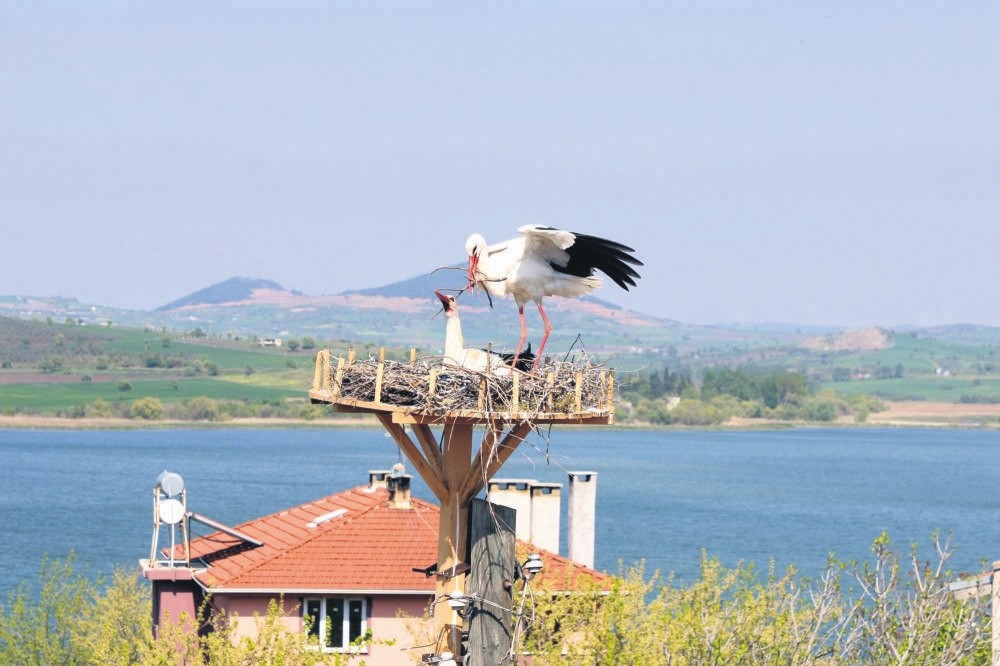 Situated on a peninsula located on Lake Uluabat's shores, the small village of Eskikaraağaç, also known as "stork village," hosts thousands of storks that migrate from Africa every year. Located in Bursa province's Karacabey district, the small town welcomed thousands of visitors this season.

The storks start to arrive in May and build their nests on the roofs of houses and the tops of poles in Eskikarağaç, the only member of the European Stork Village Network in Turkey, and in other areas around Lake Uluabat.

Approximately 500 storks, who spent the summer with their young fledglings in more than 100 nests around the lake monitored by Karacabey Municipality, have started to migrate to warmer regions.

During the breeding season, Lake Uluabat and Eskikarağac welcome thousands of nature and bird lovers alike from both Turkey and abroad.

In a statement to Anadolu Agency (AA), Karacabey Mayor Ali Özkan stressed that the district has a lot of tourism potential in addition to its already thriving agriculture and animal husbandry sectors.

Noting that Eskikaraağaç is located in a unique region on the coast of Lake Uluabat, Özkan said the region surrounding the lake hosts storks every year.

He also said the region has conducted projects to increase both the tourism potential and the stork population. "We built a memorial wall in our village that features photos of the countries in the European Stork Village Network. Photographers positioned on the edge of Lake Uluabat are also able to take photos of the sunset," Özkan continued. "In addition, Arab tourists and Europeans on tours have also shown a lot of interest in the region. The municipality also made a walking and cycling path around the lake and a social facility to address the needs of the tourists and help maintain the activities here."

Stressing that they designed the "Stork Master Plan" with the safety of the storks in mind, Özkan explained that they replaced overhead cables with underground ones and put artificial nests on the electric poles and roofs. "We also enlisted little children of the families living in the region to help watch over the storks in the nests and carried out activities to protect them properly. We are doing our best to make sure the storks have a comfortable summer," he added.

Özkan said they have raised awareness about storks, hand in hand with the locals. "The number of stork deaths was high in the past. After our preventative steps, stork deaths have drastically declined. There has been an increase in their reproduction rates as well. Citizens have become protective of them. The interest in the region is increasing day by day. We hosted 150,000 visitors in Eskikaraağaç this season," he concluded.