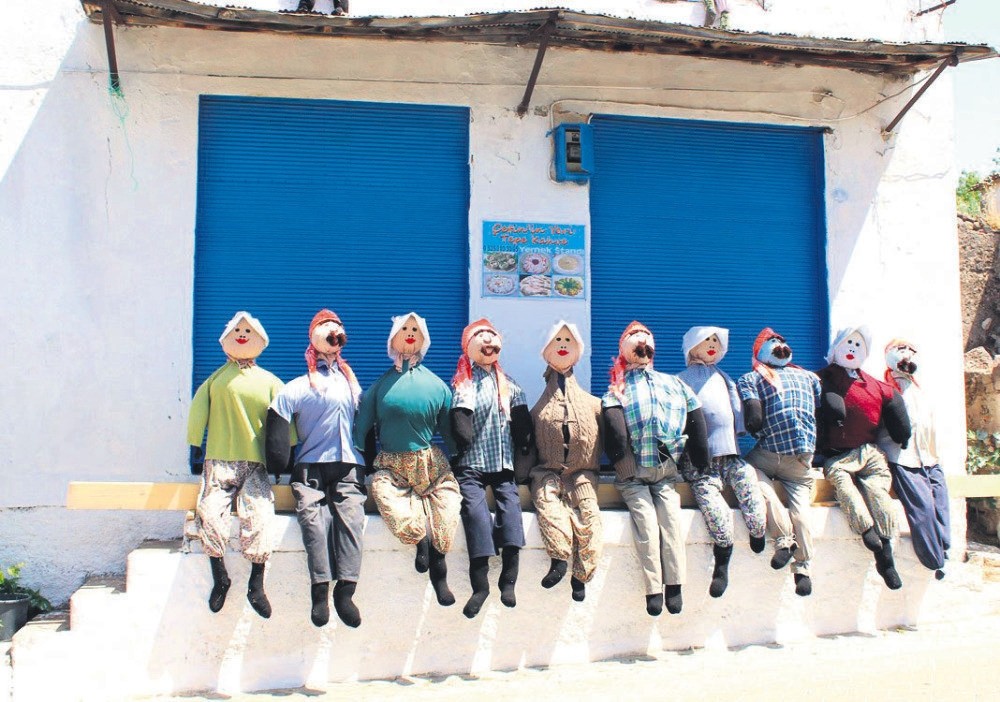 Local people have prepared some 400 handmade scarecrows that will be displayed around the village after the festival.
by Anadolu Agency Sep 07, 2018 12:00 am

The Turkish government and numerous municipalities have initiated projects to lure people to Anatolian villages and take part in agricultural production, but none of the projects seem to be as effective as the festival in Urla, where living scarecrows play the starring roles

With the growing influence of visual arts, especially in the movies, scarecrows, which were used to protect fields from crows back in the day, have turned into essential items for horror films. For one small Aegean village however, scarecrows have become a tool in encouraging locals to return to their fields and start working in agriculture again. They even organize a scarecrow-themed festival.

Held in İzmir's Urla district, the Barbaros Oyuk Festival, which was initiated two years ago, has turned into a tourist attraction and a way to lure former farmers back to their hometown.

As part of the festival locals dress up as living-scarecrows and take over the streets of the village once the sun goes down, marching to the village square in their scarecrow costumes. 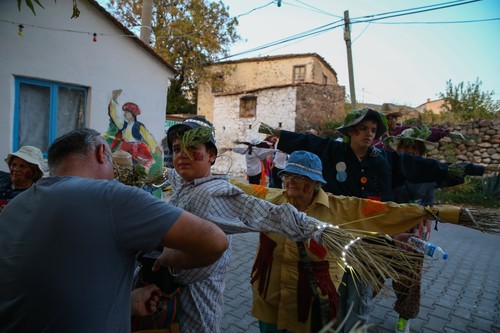 Preparation for the festival, which begins today, started long before the day itself. The locals made a total of 400 special scarecrows which were then placed around the village; on trees, on roofs, at bus stops and other locations. Moreover, the costumes and special makeup was prepared well ahead of the day.

The villagers are also determined to turn the festival into a permanent part of their culture. When the festival ends on Sept. 9, the scarecrows will continue to be displayed around the village.

As part of the "scarecrows coming back to life" project locals convene at the village square in the afternoon and start transforming into "living scarecrows" with their costumes and makeup. Once everyone is ready, they start marching to the fields. As the day turns into night over the village, the living scarecrows start making noises with special flutes that were once used to scare pigs.

With costumes that light up, the living scarecrows walk in the dark and dance, turning a scary scene into a fascinating festival.

Stating that this year's festival will be the most colorful of all, Küçükkayalar said: "Even the performance to promote the festival attracted thousands of people prior to the festival. Our aim with the Barbaros Oyuk Festival is to invite villagers back to their fields and encourage them to get involved in agriculture again. I believe this festival has become a symbol of farmers returning to their fields to plant."

Although the festival was initiated only two years ago, it seems that festival committee is achieving their primary goals. The Barbaros Oyuk Festival aimed to create an environment for farmers to take up production and lure youngsters back to the village to involve them in agriculture.

"People are returning to their village and fields," said Küçükkayalar. "Those who have not yet returned are thinking about coming back. The production activities of the village [have] increased substantially."

Locals happier than ever

The Barbaros Oyuk Festival brings people from all ages together and every resident in the village of Barbaros works together to make the festival a success.

The oldest resident of Barbaros village and also a living scarecrow, Ceylan Caner, 74, said the atmosphere of the village has changed a lot since the first year. She is excited with the interest people are showing it is too.

İlay Akar, 10, the youngest face of the festival, helps make pancakes for the visitors. Stating that she likes the village life, young Akay said: "I can play outside as long as I want. My big sister lives in İzmr. I go there sometimes but I cannot sleep due the noise from traffic. Hence, I prefer to live in the village."

İsmail Tokat, 32, is one of the villages who left for the big city. "I went to the city six years ago but I returned to Barbaros after I heard about the festival. Now, I have moved here [and] plant in my field."