Sports people open their wings at Turkey's Ölüdeniz, offering a feast for the eyes 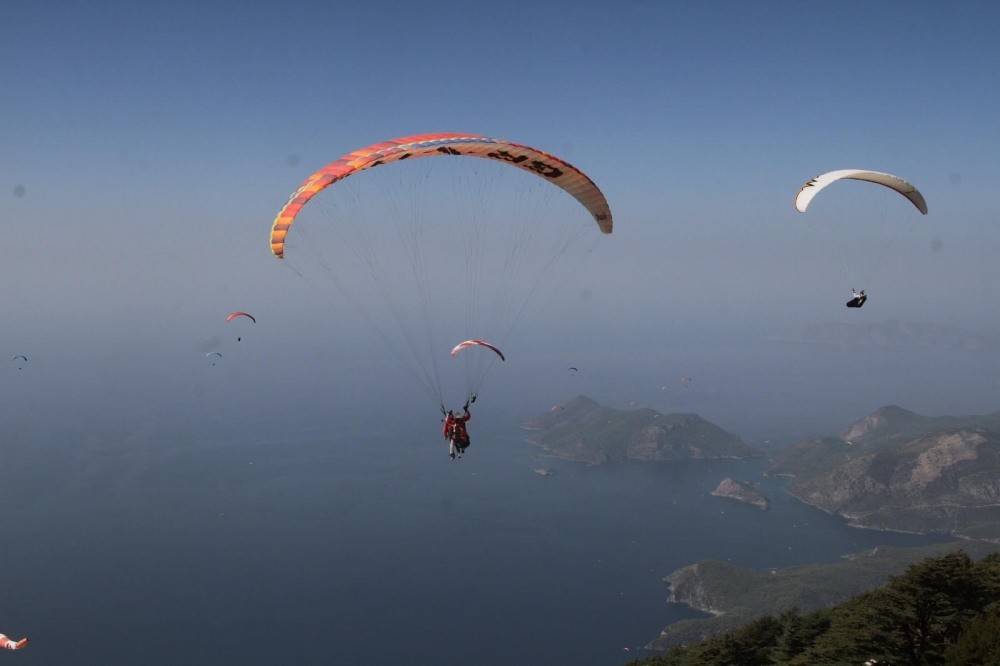 Hailed as one of world's best paragliding spots, Babadağ in Muğla's resort town of Fethiye hosts paragliders and the world's best acrobatics pilots at the International Ölüdeniz Air Sports Festival. Organized for the 19th time by nongovernmental organizations (NGOs) and sports clubs under the auspices of Fethiye Municipality, the festival welcomes 900 paragliders and pilots from 56 countries around the world.

The festival kicked off on Tuesday with a series of shows at an altitude of 1,700 meters, giving the audience quite the adrenaline rush while performing acrobatic shows in midair. Pilots of the Turkish Aviation Association (THK) also put on a show for the spectators. Apart from the professional sports people, adrenaline junkies had a chance to jump off the Babadağ mountain and float through the air with parachutes.

Speaking at the opening ceremony, Fethiye Mayor Behçet Saatcı said the World Air Olympics which will be organized in Fethiye in 2020 will be a spectacular event with the new facilities built in Babadağ. "This organization makes us excited for the Olympics in 2020. I wish good luck to all sports people and hope to finish the organization without any accidents," said Mayor Saatcı.Babadağ offers its visitors a chance to observe the unique scenery from a bird's-eye view and on land from the Belcekız Beach in Ölüdeniz with its four tracks, which are 1,200, 1,700, 1,800 and 1,900 meters high. Ölüdeniz is famous for its unrivaled paragliding opportunities.

It is seen as one of the best places in the world to paraglide for its unique panoramic view and Mount Babadağ's exceptional height. During a solo flight, you fly over the ridges with a stunning aerial view of the white beach and the lagoon. Each flight generally takes between 25 to 45 minutes. The paragliding season starts in mid-April and ends in November, so there is still some time to try it in Fethiye. For paragliding classes, there are a number of training centers such as Skywalkers and the Gravity Paragliding School.The 19th International Ölüdeniz Air Sports Festival will continue until Oct. 21.