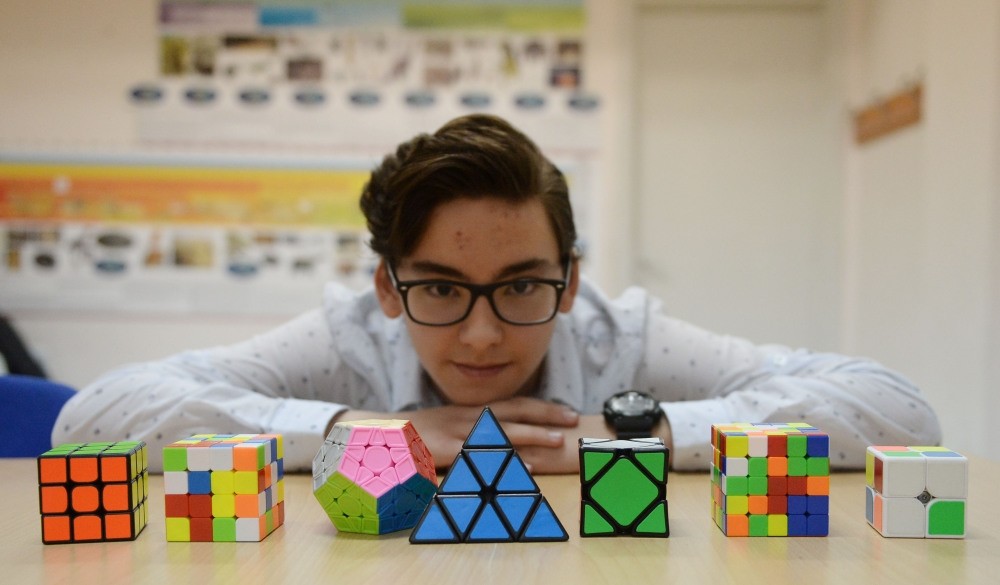 Over the last 40 years, the Rubik's Cube has become a familiar sight: You can see it sitting on the window of a toy shop or right next to the register in a stationary shop. But hardly a few dares try solving it, let alone mastering it.

Fourteen-year-old Melih Kayra Kadıoğlu discovered the magical world of the Rubik's Cube five years ago while shopping in his hometown, Uşak. Without any help, he learned how to solve arguably the world's most famous puzzle and mastered it, becoming the Turkish champion.

At first, Kadıoğlu's fascination with the Rubik's Cube started as a hobby. However, a year ago, his teachers at Uşak Science and Art Center encouraged him to participate in the national Rubik's Cube championships.

In February, he managed to solve the cube in 2.7 seconds and became the Rubik's Cube champion in "Skewb" category. Now, Kadıoğlu wants to take his success to the next level and become a world champion and world record holder.

Speaking to Anadolu Agency (AA), Kadıoğlu said that he practiced with his cube every day for at least an hour. "The world record for Skewb Cube is 1.10 seconds. I broke the record during my training but I have not had the chance to compete in an international competition yet."

He practiced his skills on a variety of Rubik's Cube but he is best in Skewb. For the last six years, his teachers at the Science and Art Center are supporting and encouraging him to become the world record holder. Kadıoğlu said breaking the record is not easy but it is not impossible.

The Principal at Uşak Science and Art Center Şakir Özdemir said: "He left our head spinning with his cube solving skills. We asked him to participate in the Turkish championship last year and he broke the Turkish record for Skewb Cube in the first go. I hope that he will become a world record holder."

The Skewb Cube which was invented by Tony Durham is a combination puzzle and a mechanical puzzle in the style of Rubik's Cube. Although it is cubical in shape, it differs from Rubik's construction in that its axis of rotation passes through the corners of the cube rather than the centers of the faces. There are four such axes, one for each space diagonal of the cube. As a result, it is a deep-cut puzzle in which each twist affects all six faces.

The world record for the Skewb Cube is 1.10 seconds is held by Poland's Jonatan Klosko.