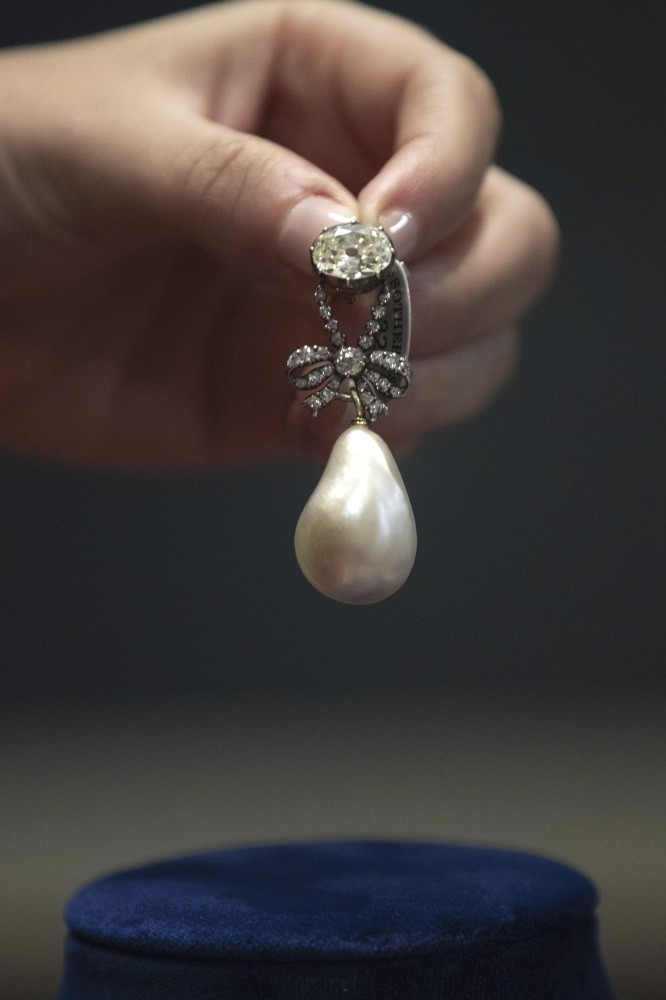 The pearl and diamond pendant owned by Marie Antoinette before she was beheaded during the French revolution.
by Associated Press Nov 16, 2018 12:00 am

A large, drop-shaped natural pearl pendant sold for more than $36 million Wednesday at a rare auction of jewelry that once belonged to French Queen Marie Antoinette, which Sotheby's is calling a record price for a pearl at auction.

The "Queen Marie Antoinette's Pearl," a diamond-and-pearl pendant, was among the highlight offerings on the block at the Sotheby's sale of jewelry from the Bourbon-Parma dynasty in Geneva.

Sotheby's billed the sale as a once-in-a-lifetime chance to scoop up heirlooms and jewels that have been held in the Bourbon-Parma dynasty for generations. Some of the Marie Antoinette jewelry hadn't been seen in public for 200 years -- until now.

Like many of the 10 former Marie Antoinette pieces up for sale, the pendant obliterated the pre-auction estimate -- in its case, $1 million to $2 million. It sold for a hammer price of 32 million Swiss francs ($32 million), but with the buyer's premium and fees, the total sale rose to more than $36.1 million.

The buyer wanted to remain anonymous, the auction house said.

The diamond and pearl jewelry of Marie Antoinette that went under the hammer epitomized the aloof, pre-Revolutionary opulence of French royals brought down by the uprising. The wife of King Louis XVI, she was executed in France's revolutionary fervor in 1793.

Before falling to the guillotine, she had secretly smuggled abroad some of her most treasured possessions to her relatives amid rising the revolutionary fervor that ultimately marked the beginning of the end of France's centuries-old monarchy.

"The Marie Antoinette pendant is simply irreplaceable," Eddie LeVian, CEO of jewelers Le Vian, said before the sale. "This is about far more than the gems themselves: Marie Antoinette's jewelry is inextricably linked to the cause of the French Revolution."

Nearly all of those lots far outstripped the pre-sale estimates, a testament to the difficulty in assessing the value of such rarely available jewels.

"It was really the Bourbon-Parma factor, plus certainly the Marie Antoinette factor," said Daniela Mascetti, Sotheby's chairman for jewelry in Europe. "Prices really rocketed. Some items sold for, I think, 20 or 25 times more than the presale estimate."

Added Andres White Correns, senior director for jewelry: "We had said when we did the press conference for this sale that this was going to be the sale of this century -- and I think that the results tonight prove that this is the case."