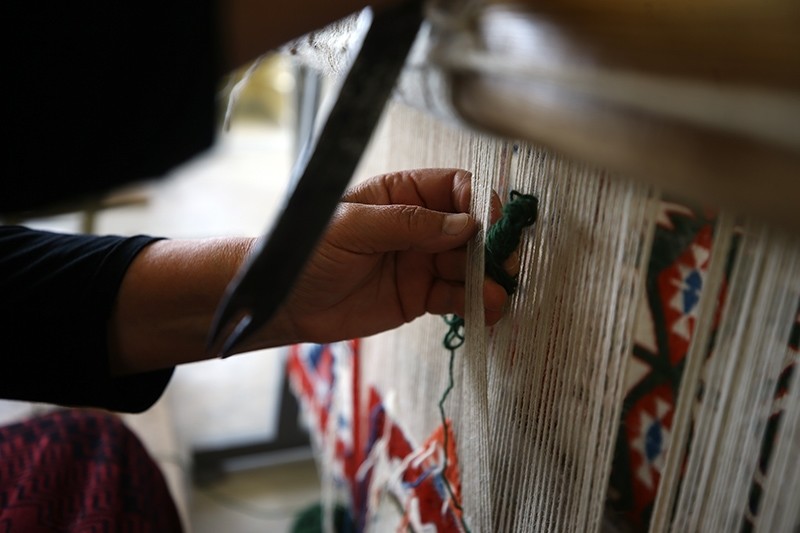 Locals in western Turkey's Afyonkarahisar have been keeping a milenniums-old rug-weaving tradition alive with the support of the district governorate.

The main source of income for locals of Bayat, named after the Bayat tribe of Oghuz Turks, is weaving traditional handmade rugs.

The colorful rugs with traditional motifs are made of sheep wool and madder root, and reflect the cultural richness that Turks carried from Central Asia to Anatolia.

Cistus, acorn and thuja plants collected from the mountains are dried in the shade. They are later put in boilers together with yarn and boiled to give them their natural color. The yarn are left for 24 hours in the boiler and then hanged and left to dry. Dried yarn is weaved on looms by skilled hands and turned into rugs.

Deputy District Governor of Bayat Ahmet Nuri Demir told Anadolu Agency that the rug weaving has been a tradition for all Turkish tribes, but especially developed in the Bayat tribe.

Stressing that the most important feature that has characterized Bayat rugs to this day is that they are woven with madders, Demir said plants, flowers and fruits collected from nature are processed and turned into madder by skilled hands. He added that the sheep wool coming from the villages of this region are given color with this paint.

Demir noted the yarns painted with madder are converted into rugs with fine craftsmanship.

"Wool threads are turned into handicrafts carpets in the hands of the women of Bayat," Demir said, adding that the rug motifs reflect the emotions of the women who made them.

"The most important feature of Bayat rugs is that they are long lasting," he added.

Demir said the rug-weaving tradition is being kept alive by only a handful of artisans in the town.

"They're very difficult to weave. We have only six to seven weavers right now. We have only one madder root painter. We're trying to increase these numbers," he said.

"The rug motifs reflect what is in the hearts of our women, the things they see in nature and in their surroundings, as well as the sorrow, joy, troubles they experience. The 12 models used in the period they were first weaved are also preserved today," Demir noted. "Without deviating from these, our women continue to weave the same models with the same feelings. We attend international fairs. In many places, we see rugs made with synthetic dyes are sold as Bayat rugs, especially in touristic places. But Bayat rugs can only be found in Bayat district in their most original state. These rugs are available in our workshop located on the Ankara-Afyonkarahisar highway."

Emine Sökmen, deputy director of the Bayat Social Assistance and Solidarity Foundation, on the other hand, stated that they continue to weave the rugs unique to the Bayat tribe in the Bayat Rug Workshop.

Sökmen stressed that they also obtained the geographical indication of Bayat rugs, highlighting that the rugs weaved in the workshop are usually purchased and given as a gifts by people who know the significance of the rugs and madder.

They hang them on the top corner of their house. Those who know the true value of the rugs show interest in our rugs. Those who come to visit our district first say Bayat rugs are very expensive compared to carpets and other rugs. But they are amazed to learn that our rugs are woven with 100 percent madder, and that their colors and motifs are preserved for 120 years. Bayat rugs are purchased by those who know what an authentic rug is," Sökmen concluded.

Oghuz Turks are a Western Turkic people that speak an Oghuz dialect of Turkish. They began migrating west from the Aral steppes in the 11th and 13th centuries and spread across central Asia. The Bayat tribe is a Oghuz tribe that today lives in Turkey, Azerbaijan, Iran, Iraq, Syria and Turkmenistan.