Eyes on Antarctica: Turkey's next scientific expedition due next month 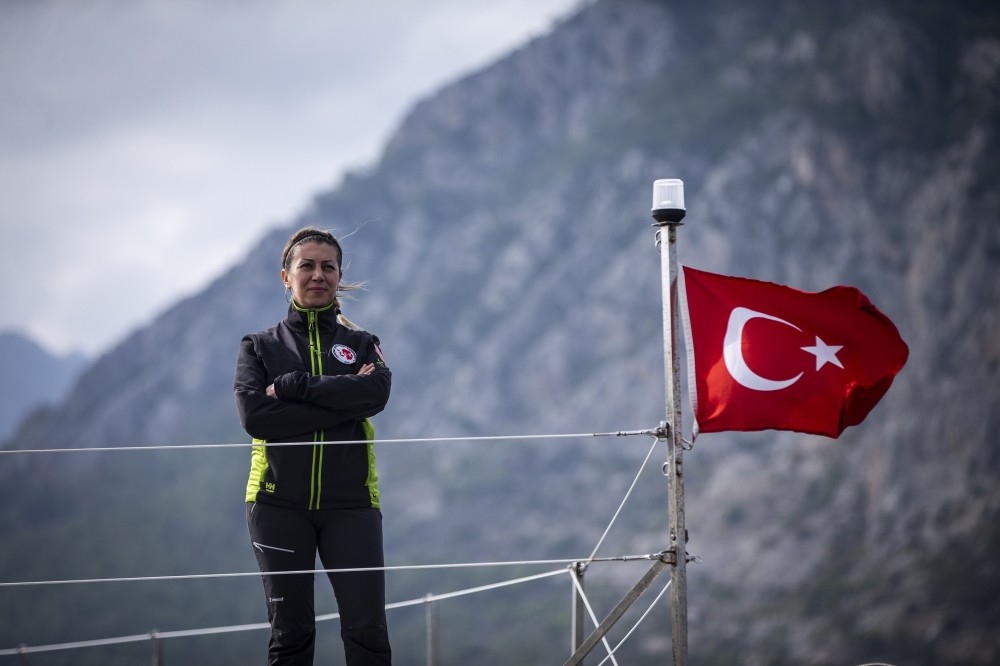 Assoc. Prof. Burcu u00d6zsoy, the leader of the Turkish Antarctic Scientific Expedition, on a boat during the training.
by Daily Sabah with AA Dec 04, 2018 12:00 am

Turkey has come a long way from participating in Antarctic expeditions as an observer country, im fact, it is now preparing to send its third expedition team to the ‘white continent.' To prepare for the various scenarios that they will face, scientists and participants are busy training for the trip

The date of 3rd National Antarctic Scientific Expedition, which will be organized within the scope of the Turkish Scientific Research Base project in Antarctica, has been set as Jan. 25, 2019 depending on the logistics and weather conditions.

As preparations for the voyage began, the scientists who will set foot on the "White Continent" received intensive training from basic first aid to firefighting and the use of speedboats to onboard training.

Works for the expedition, which will be realized under the auspices of the Presidency of the Republic of Turkey and in coordination with the Ministry of Industry and Technology and the Istanbul Technical University (ITU) Polar Research Center (PolReC), have accelerated.

The scientists who will go to the continent received intensive training at the Coast Guard Training and Education Command located in Antalya. During the three-day program, scientists were given theoretical and practical basic first aid, firefighting, onboard and speedboat training.

Industry and Technology Minister Mustafa Varank closely followed the training of the delegation. Varank received information about the expedition and the trainings from associate professor Burcu Özsoy, the leader of the Turkish Antarctic Scientific Expedition.In a statement to Anadolu Agency (AA), Minister Varank said the works on the establishment of the Turkish Scientific Base in Antarctica, realized under the vision of President Recep Tayyip Erdoğan, are ongoing.

Varank recalled that Turkey currently holds the status of an observer country in Antarctica.

"If the weather conditions are available, we will launch our third expedition on Jan. 25, 2019. This time, 11 Turkish scientists and four foreign researchers will participate. Our team will establish a temporary Turkish Scientific Base for the first time," Minster Varank continued. "In addition, eight Turkish scientists will continue their scientific activities in other foreign research bases and research vessels in the region. You know, we have observer status here, we need to fulfill an assortment of conditions in order to secure our position as a consultative country. Our third expedition is one of these conditions. I hope that after fulfilling these conditions, we will become a consultative country in Antarctica and establish our permanent base there."

Özsoy also commented on the training for the scientists who will take part in the expedition. She said that the countries engaged in the projects on the continent have completed the training and each country uses different exercises and drills.

"Korea gives two-week training, while some other countries give it in one day," she noted. "By studying the applicability of this training in the international community and by scientific programs, we established an ideal program for Turkey as Coast Guard Command and ITU Polar Research Center."

She explained that on the first day of the training, first aid and firefighting classes were given by experts, followed by onboard training on the second day.

Özsoy stated that 80 percent of the journey to Antarctica takes place at sea, adding the training included different aspects such as onboard training, speedboat use, customs onboard, hierarchy onboard, technical terms and what clothes to wear in emergencies.

On the third day, Özsoy stated that the Madrid Protocol, which includes the rules for environmental protection in Antarctica, was explained. She said that the content of this year's training is more comprehensive than the one they received last year.

Burak Karacık, a member of Istanbul Technical University's (ITU) Faculty of Naval Architecture and Ocean Engineering, said he also participated in the previous two expeditions. He pointed out the importance of pre-exhibition training.

Karacık said that the training boosted people's confidence at sea.

"Especially the training on survival at sea and what should be done in case of emergencies is crucial because we are going to a place where weather conditions change very suddenly," Karacık said, underlining that the military training they received proved itself quite useful during the expedition, and that it was quite regular and disciplined.

In 2017, in a historic first, a team of Turkish researchers, including medical doctors, botanists, survey and geological engineers and oceanographers from seven Turkish universities went to Antarctica on a scientific mission to study the impact of climate change. Another group visited to carry out early feasibility studies for the base on the continent.

Antarctica has served as a scientific preserve since the Antarctica Treaty was signed in Washington in 1959, with Turkey as a party. The continent is considered the coldest on earth with the lowest temperature recorded in 1983 at minus 89 degrees Celsius (minus 128 Fahrenheit). In the summer, temperatures rise to minus 5 degrees.

Turkey's first polar research center, the ITU Polar Research Center, also known as PolRec, was established in 2015. The mission of the center is to carry out research in the Antarctic and develop Turkey's visibility in the international scientific community.

In previous expeditions, Turkish scientists observed the area, took samples and examined locations for a research base. The latest expedition returned to Turkey in April.