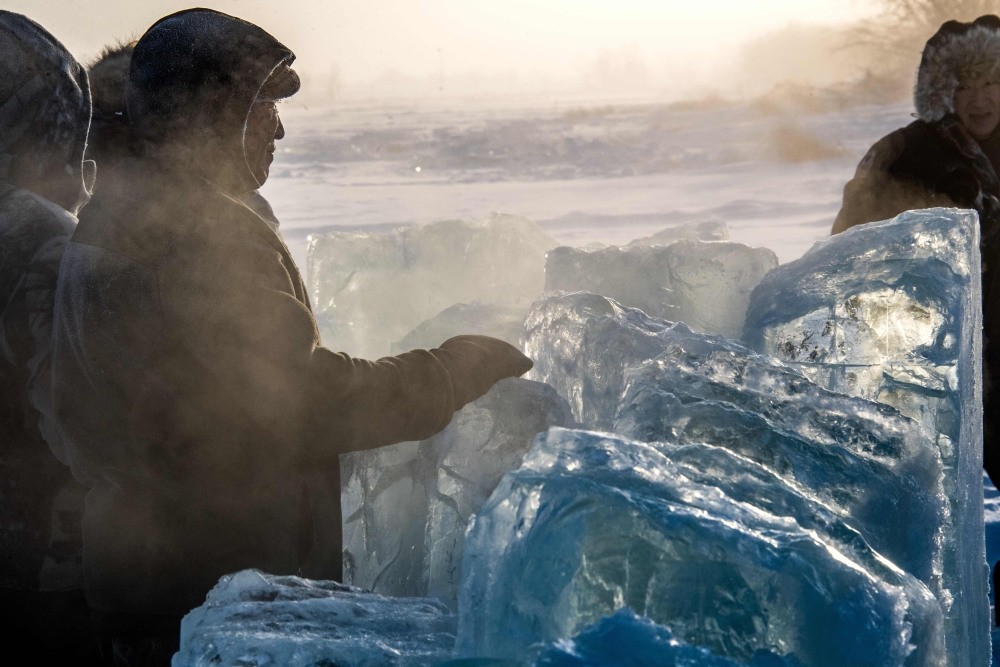 Innokenty Tobonov sinks his harpoon into a long block of ice while his helpers expertly push it out of freezing lake waters onto the snow-dusted surface before sliding it towards an idling tractor.

After an hour of cutting ice blocks out of the lake in temperatures of minus 41 degrees Celsius (minus 42 Fahrenheit), cold vapor has frosted his eyelashes.

But this is no excuse for a break as the group hurries to extract a winter's worth of frozen drinking water for an elderly neighbor.

Villages like Oy, where Tobonov sits on the local council, rely on such "ice water" for most of the year.

Digging wells is too expensive in this part of the world, due to a thick layer of hard permafrost.

Tap water in Tobonov's village - drawn from the mighty Lena River - is only usable for around 2.5 months of the year.

Pipes freeze during the long winter, and in spring, when the rivers break, the water is too full of sediment to consume.

It is harvested in November and stored outside during the winter - usually on a raised surface to keep it out of reach of dogs.

As the weather warms, locals move their supply into underground cellars that become natural year-round freezers thanks to their permafrost walls.

"We do this every year," Tobonov said. "The village needs drinking water."

He said a small household needs about 10 cubic meters (353 cubic feet) of ice for the winter.

"This is hard physical labor," Tobonov said, smiling. "The hardest is when the ice is about 50 centimeters (20 inches) thick, it's difficult to pull it out."

"We drink and cook from ice water," said 74-year-old Oy resident Pelageya Semenova after Tobonov and his team unloaded the sparkling bricks outside her house. "It's very convenient."

"I boil it because I'm afraid of drinking it raw, though people say that ice water has no vitamins."

Sparsely populated Yakutia is popularly known as "the land of lakes" and has around one lake per each of its million residents. Rural communities are especially reliant on clean surface water.

Any pollution goes directly into their drinking supply since village budgets cannot afford water filtering stations or wells deep enough to draw from below the permafrost layer.

"We give a lot to Russia but little returns to benefit local rural people," said Dmitriyeva, who heads the Eyge environmental nongovernmental organization (NGO) based in the region's main city Yakutsk.

People living in areas where natural resources are mined are regularly affected by pollution.

lt by Alrosa, which produces a third of the world's diamonds, broke and villages around the Vilyuy River could no longer use it as a water source.

Alrosa said at the time that the river was safe despite the accident, which they blamed on abnormally heavy rains.

Russia's environment watchdog in October estimated the damage to the Vilyuy basin at 22.1 billion rubles (over $330 million) but last month said Alrosa will not be held accountable as the accident was caused by a "natural disaster."

Community leaders in Yakutia however are convinced the company provoked the accident when it moved its mining equipment on the river without permission.

The dispute is likely to continue for years, with local residents powerless and forced to accept a compromised water supply, Dmitriyeva said.

"People suffer more from events like this because they lead a traditional way of life," she said.

"In Yakutia, people are more environmentally conscious because they understand their dependence on nature."

Tobonov said that even as some infrastructure, like gas supply, comes to Oy and other villages, Yakutia residents must know how to survive when it fails.

"We don't forget our traditions, we teach boys how to harvest ice, how to chop wood, hunt and fish," he says. "Being able to survive in extreme situations is a necessity in Yakutia."