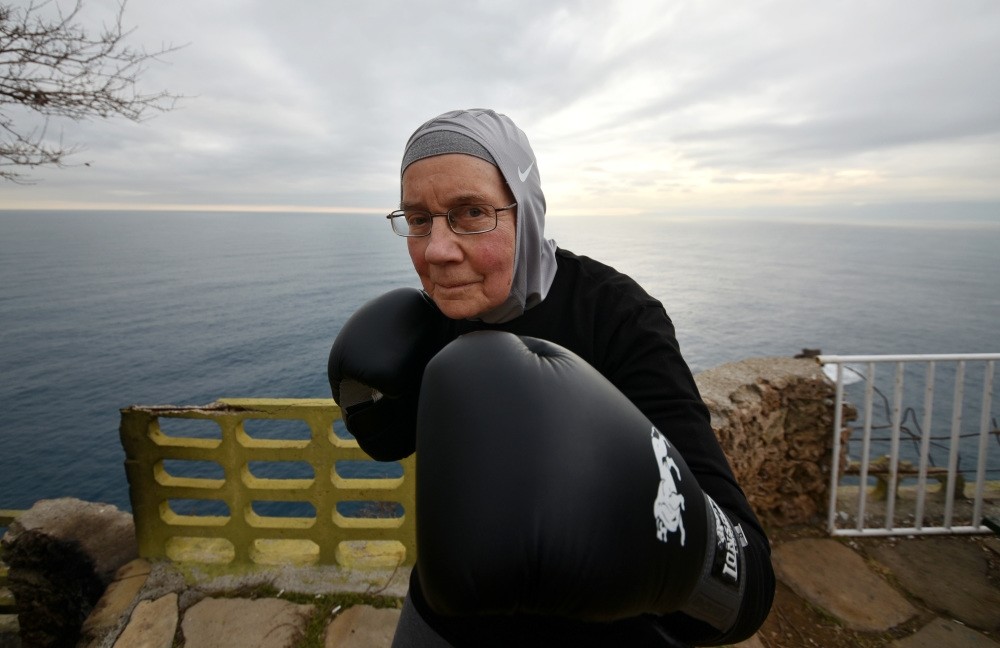 Nancy Vanderstraeten is fighting back against Parkinson's three days a week in the boxing ring.
by Daily Sabah with DHA Dec 26, 2018 12:00 am

Have youever seen a grandma in a boxing ring? Nancy Vanderstraeten, a 72-year-old Belgian residing in Turkey, has put on some gloves to fight Parkinson's

There is no age limit when it comes to taking up sports. But usually, the elderly are expected to go easy on their bodies to avoid injury. That is except for 72-year-old Nancy Vanderstraeten, aka Naciye, who is not your typical elder. The Belgian grandmother has taken up boxing to fight Parkinson's disease.

As a painter, Naciye started to travel around the world with her husband 40 years ago and she fell in love with Turkey, especially Istanbul. With an abrupt decision, the Vanderstraetens moved to Istanbul. After doing so, Nancy took the name Naciye and has used it ever since.

However, five years ago, Nancy was diagnosed with Parkinson's disease. In time, Nancy started having troubles completing daily tasks because of uncontrollable shaking. As she was thinking of what to do, Nancy remembered seeing elderly Parkinson's patients who were boxing. After consulting with her doctors, Nancy hit the neighborhood gym.

Stepping on to the boxing ring

Nancy's battle with Parkinson's was rough until five months ago. Taking pills and unable to perform everyday tasks, Nancy had had enough. She started boxing with the help of trainer Emin Gürhan. She trained one-and-a-half hours three days a week.

Donning her boxing gloves, Nancy stepped onto the boxing ring and everything started to go well again. She said that her health is improving day by day.

"I have begun to walk faster and the shaking has decreased," she said.

Since stepping on the ring for the first time, Naciye's love for boxing grew. After only five months, she says she cannot even think about not going to the gym for a week.

"I want to get on the boxing ring more," said Nancy while explaining what boxing really means to her.

She said at first it was very difficult to accept that she was diagnosed with Parkinson's disease.

"But I told my doctor that I have seen patients who were boxing get better," she said. "Since taking up boxing, I feel much better. I shake less and I have better motor skills. But eventually, boxing became more than a treatment for me. Now, it is one of my passions."

Gloves are on, Nancy is ready to fight

Nancy strongly believes that her love for boxing has helped her get better.

"I work out around one-and-a-half hours a day, three days a week. Since I started boxing, everyday tasks have become easier for me. If you have Parkinson's, there are only two paths ahead of you: You either do not exercise and become paralyzed or be active and live a better life. The drugs are not enough," Nancy said. Before she started exercising, Nancy could not walk without the help of a walking stick and it was not possible for her to walk with her back straight. Now, she has a much better posture.

"I feel great while boxing. The punches I throw heal me. I listen to very loud music when I box. My brain works more efficiently as well. I feel great after every training session," she added.

Parkinson's disease is a progressive nervous system disorder that affects movement. Symptoms start gradually, sometimes starting with a barely noticeable tremor in just one hand. Tremors are common, but the disorder also commonly causes stiffness or slowing of movement.

In the early stages of the Parkinson's disease, the patient's face may show little or no expression, arms may not swing while walking. Patients also have speech problems; it may become soft or slurred. The symptoms only worsen over time.

Although Parkinson's disease can't be cured, medications and certain exercises might significantly improve your symptoms. Research is limited but boxers and their caregivers have noticed major improvements in their symptoms.

A small study followed a few boxers in the Rock Steady Boxing Foundation. The results published in "Physical Therapy" found that all boxers who followed through on 12 weeks of training saw improvements in their symptoms. Those who stuck with the training for 24 or even 36 weeks saw a sustained improvement in their symptoms. Even boxers who worked out less often after the initial 12 weeks continued to improve.

Participants with moderate to severe Parkinson's took a little longer than those with milder symptoms to see changes but their dedication paid off a few weeks later.