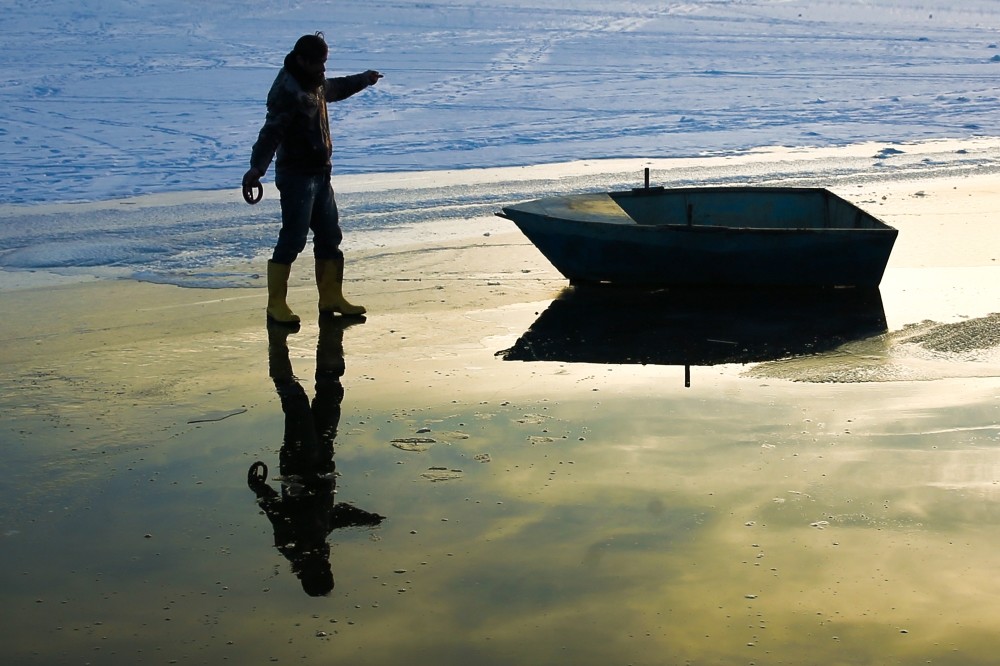 Winter hits the eastern parts of Anatolia hard. The temperature is below zero in the region, and the locals have adapted their lifestyles according to the cold. Turkey's largest lake, Lake Van, which is located in eastern Anatolia, is frozen, and the surface is covered with 10 centimeters of thick ice. However, this thick ice does not repel the fishermen who fish in Lake Van, regardless of the season. Ignoring the dangers posed by the frozen lake, fishermen dig holes in the ice and continue fishing.

Although people watching anxiously pray that no harm comes to them in the course of this dangerous job, the fishermen seem to enjoy their time on ice. Menaf Güleş, one of the fishermen, said it is very exciting and entertaining to hunt on the ice. Güneş said he is a seasonal worker, working in the fields around Anatolia during the summer and returning to his hometown of Van in winter.

"Van is beautiful in winter. We make the most of the season in our hometown and come here to fish. We are both having a good time and earning our livelihood. It is fun to fish on the ice. Many fishermen come here from neighboring cities as well. We prefer to crack the ice at night, set our nets and come here to pick them up in the morning. Although it is a challenging job, it is worth it to catch a net full of fish," Güleş continued.

According to another fisherman, Sinan Şalvan, the frozen lake is a popular spot on weekends. He also said carp is abundant in winter, while pearl mullet comes to the shores of the lake in summer.

"I prefer to set my nets at night and pick them up in the morning. Sometimes, I catch kilos of fish, but sometimes I catch only a couple. There are also days we cannot catch any fish. I have seen people catching fish up to 400 kilograms in one shot. Most fishermen here do this job to earn extra money. We sell a kilogram of fish for TL 5. It is a risky job, but I love it," Şalvan added.

Lake Van is a saline soda lake, receiving water from numerous sources, including fresh water, which causes it to freeze easily. Whether it is a very cold winter or not, the lake freezes as soon as the temperature drops below zero.